On the campaign trail, Trump said it would be "so easy" to repeal and replace Obamacare. Things have changed. 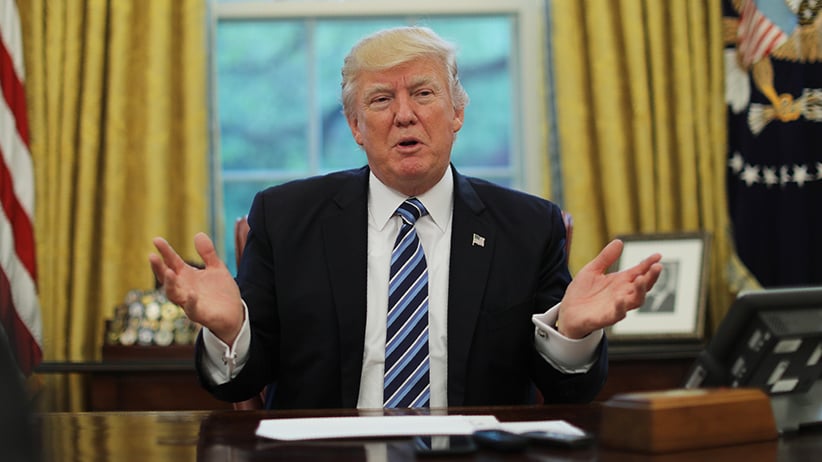 U.S. President Donald Trump speaks during an interview with Reuters in the Oval Office of the White House in Washington, U.S., April 27, 2017. (Carlos Barria/Reuters)

NEW YORK – It was a far cry from “The buck stops here.”

President Donald Trump, dealt a stinging defeat with the failure of the Republican health care bill in the Senate, flipped the script from Harry Truman’s famous declaration of presidential responsibility and declared Tuesday, “I am not going to own it.”

He had tweeted earlier, “We were let down by all of the Democrats and a few Republicans.”

RELATED: Senator Kid Rock and the decline of U.S. politics

This is the same president who thundered night after night on the campaign trail that it would be “so easy” to repeal and replace the Obama health care law on Day One of his administration.

It’s a president’s burden to shoulder the nation’s problems whether they are inherited or created in real time. Barack Obama took office with the American economy facing its worst crisis since the Great Depression. John F. Kennedy accepted responsibility for the failure of the invasion of Cuba at the Bay of Pigs, ordered on his own watch.

“That’s the nature of being elected president: You own the policies, the economy and the government,” said presidential historian Julian Zelizer, a professor at Princeton University. “You own the positives and negatives of the job whether you think it’s your fault or not. You live in the White House: You can’t disassociate yourself from what happens if you don’t like it.”

Trump took office armed with Republican control of both houses of Congress and an ambitious agenda that would begin with the repeal and replacement of Obamacare. Six months later, the collapse of the GOP plan was a sharp rebuke for the president, who was unable to cajole or threaten Republicans to stay in line and who exerted little of his diminished political capital to see through a promise that had been at the core of his party since Obamacare became law seven years ago.

The president’s disjointed support for the health care plan did little to persuade Republicans to support it, and the fact that his approval ratings had dropped below 40 per cent didn’t help either.

Trump never held a news conference or delivered a major speech to sell the bill to the public. He never leveraged his popularity among rank-and-file Republican voters by barnstorming the districts of wavering GOP senators. And he never spearheaded a coherent communications strategy – beyond random tweets – to push for the plan. 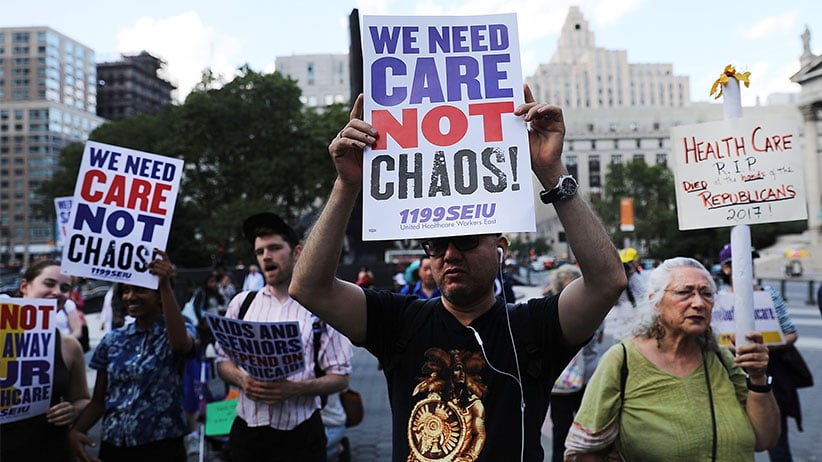 “The best way to motivate members is talk to their constituents and at no point did he try to talk to Americans about health care reform in any sort of serious way,” said Alex Conant, a Republican strategist who worked on Florida Sen. Marco Rubio’s 2016 presidential campaign. “His attention seems to drift with whatever is on cable news on any given moment as opposed to what is on the Senate floor any given week.”

Sounding almost like a bystander during his brief Oval Office remarks Tuesday, Trump six times expressed “disappointment” that the Republican effort had failed. And he insisted the fault rested with Democrats and suggested Obamacare should be left to fail on its own.

OPINION: In the Trump era, youth must fight for democracy

“That is such a small and petty response,” Schumer said. “Because the president, he’s in charge. And to hurt millions of people because he’s angry he didn’t get his way is not being a leader.”

Despite Trump’s efforts to shift blame across the aisle, the White House made little effort to court Democrats.

Instead of initially pursuing an infrastructure plan – which would have likely received support from unions and blue-collar workers, making it hard for Democrats to oppose – Trump opted to tackle the far more polarizing issue of health care first. He outsourced most of the work to House Speaker Paul Ryan and Senate Majority Leader Mitch McConnell.

It became a strictly Republican effort which, due to the party’s slight advantages in the House and Senate, had little margin for error. And it was conservatives from Trump’s own wing of the Republican party who thwarted him.

RELATED: What it’s like to be Russian in the U.S. right now

The conservative House Freedom Caucus defied him and ignored his Twitter threats. The two senators who withdrew their support Monday night, effectively killing the bill, didn’t even give the White House a heads-up before announcing their decisions. And even though Trump allies have threatened to aid primary challengers to a pair of on-the-fence senators – Jeff Flake of Arizona and Dean Heller of Nevada – the Republicans did not cave, potentially setting a worrisome precedent for the White House as it tries to move ahead with the rest of its stalled agenda.

Former House Speaker Newt Gingrich, a Trump adviser, believes that both Congress and the White House share blame after seemingly forgetting that “opposition parties pass press releases that get vetoed, while governing parties pass bills in which every paragraph gets scrutinized.”

“I hope the president learns that do something really, really big, you need to be disciplined and focused and sort out your communications program,” said Gingrich. “So far, they are clearly not capable of doing that.”