Can Trump shut out Canada and cut a trade deal with just Mexico?

Chrystia Freeland insists Canada has to sign, and a top trade lawyer says the White House lacks the authority—but Trump is blustering ahead 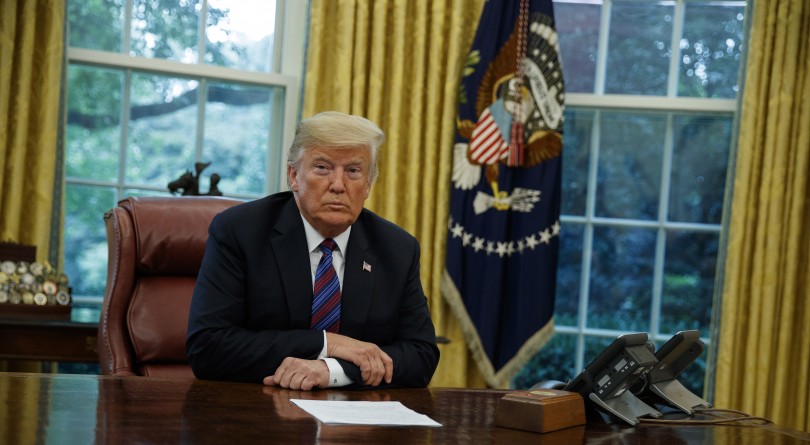 President Donald Trump listens during a phone call with Mexican President Enrique Pena Nieto about a trade agreement between the United States and Mexico, in the Oval Office of the White House, Monday, Aug. 27, 2018, in Washington. (AP Photo/Evan Vucci)

Now, why would Canada’s signature be needed on a pact that Trump proposed would no longer even be called the North American Free Trade Agreement? “We’re going to call it the United States-Mexico Trade Agreement,” he said of today’s deal, explaining that NAFTA “has a bad connotation because the United States was hurt very badly by NAFTA for many years.”

Trump made these comments during an oddly riveting televised event from the White House, where he had Mexico’s outgoing president, Enrique Peña Nieto, on speakerphone. For his part, Peña Nieto repeatedly mentioned his hopes for Canada now returning to the negotiating table, with the aim of incorporating this new U.S.-Mexico understanding into an updated three-nation NAFTA.

READ MORE: If NAFTA dies, ‘all hell will break loose’

Indeed, Freeland’s office quickly announced that she is flying to Washington tomorrow, cutting short a European trip, for NAFTA talks. But Trump suggested she would have to agree to terms fast, or he’ll simply slap tariffs on Canadian auto exports to the U.S. “It will either be a tariff on cars, or it will be a negotiated deal,” he said. “And, frankly, a tariff on cars is a much easier way to go, but perhaps the other would be much better for Canada.”

The word you’re searching for is “threatening.” However, Freeland’s staff preferred “encouraging” to describe what had transpired in Washington. “Given the encouraging announcement today of further bilateral progress between the U.S. and Mexico, Minister Freeland will travel to Washington, D.C., tomorrow to continue negotiations,” her spokesman said. “We will only sign a new NAFTA that is good for Canada and good for the middle class. Canada’s signature is required.”

Not according to Trump. After all, the deal with Mexico covers the auto sector, which has always been his top NAFTA gripe. Among other things, the agreement would reportedly require 40 per cent to 45 per cent of the content of autos traded tariff-free in the NAFTA zone to be made by workers earning at least US$16 per hour, higher than the usual wage in Mexican auto plants, while boosting the overall made-in-North America content requirement to 75 per cent from the current 62.5 per cent.

RELATED: All Donald Trump’s NAFTA mood swings in one chart

There’s no obvious reason Canada couldn’t live with those auto-sector revisions. But that doesn’t do anything to clear up the other sticking points that have clogged NAFTA talks for more than a year, notably including Trump’s longstanding demand for better access to Canada for U.S. dairy exports. The more immediate question, though, is whether Trump really can seal a two-way deal with Mexico and shrug Canada off.

Lawrence Herman, a veteran Toronto trade lawyer with long experience in Canada-U.S. relations, says Trump doesn’t have that power. U.S. law requires a president to formally get Congress’s approval for trade negotiations. Trump did just that last summer, proposing to modernize NAFTA—not lop off Canada. “He has not got any approval to negotiate a bilateral deal with Mexico,” Herman said. “He would have to go back and settle with Congress his negotiating objectives with Mexico.”

But Trump’s trade representative, Robert Lighthizer, told reporters in Washington that the administration plans to push ahead with a U.S.-Mexico agreement, leaving Canada the option of joining in later. Herman questioned how that approach could possibly be seen as falling within Trump’s authority to modernize NAFTA. “To change objectives and negotiate a bilateral deal with Mexico means that he would have to terminate the NAFTA, because the NAFTA binds all three countries,” Herman said.

“He has to give six months’ notice of his intention to withdraw from the treaty, and he’d have to get congressional approval. Congress approved the NAFTA; they would have to approve U.S. withdrawal, and change a whole slew of U.S. laws that implement the trilateral agreement. He’s never going to get that from the Congress.”

So the situation for the rest of this week in Washington is shaping up as complex and tense. The Trump White House will have to start trying to build support in Congress for its bilateral approach. Freeland will arrive for talks, with Lighthizer wielding the deal he already has in hand with Mexico as new leverage. The stakes are of course enormously high for by far Canada’s biggest trading relationship.

Regardless of the roiling debate about U.S. trade law and negotiating tactics, Trump’s imperiously dismissive tone about Canada today leaves little doubt the Washington-Ottawa relationship is badly frayed. “I think this is threat and bombast, but it is indicative of a very negative relationship between the White House and the Canadian government,” Herman said. “I think it has descended into the worst period in history from that perspective.”