May 23: Bureaucratic bigwigs guilty of misconduct could have their bonuses yanked and Parliament could be getting an in-residence "visual artist laureate"

An artist of their very own

The government is stamping a big red “No” on a larger proportion of asylum applications from irregular border crossers this year than last. As they await hearings, they’re filling jobs at meat-packing plants and other businesses short on workers. [Reuters story, Washington Post story]

Alberta’s Rachel Notley is skipping the Yellowknife congregation of regional premiers. John Horgan was the absentee last year, though he passed on what my remote colleague Jason Markusoff at the time called a “game of inches” in less pointed fashion. [Canadian Press story, Maclean’s story]

Skeena—Bulkley Valley Constituents: What do they care about? Do they care about things?? Let’s find out! B.C. NDP MP Nathan Cullen is opening up the lawmaking process to the people of his riding, promising to champion a private member’s bill based on the best legislative idea put to him through a contest. [Canadian Press story]

Where the Ontario leaders at: Andrea Horwath will talk at the young people assembled for a Toronto coffeehouse function; Doug Ford is in southwest-est Ontario; while Kathleen Wynne takes in Thunder Bay with her local candidates. [Maclean’s leader tracker] 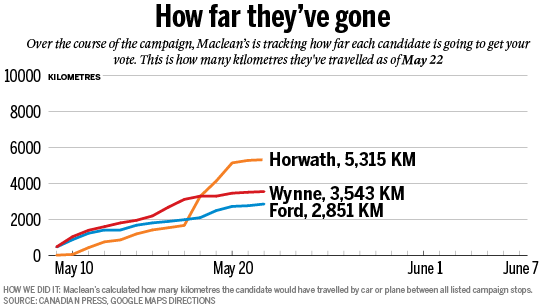 Seven honourable justices will today begin lending their ears to arguments in the case of Vice reporter Ben Makuch, whose communications with an ISIS online personality the RCMP want. Press freedom and source protection are at issue. [BBC story]

Parliament could soon extend patronage to a “visual artist laureate.” The role would involve both creating and curating, although our elected and selected representatives don’t pay quite as well as the Medicis. [Winnipeg Free Press story]

If you see what looks a lot but not exactly like a Chagall tagged up behind the Speaker’s chair, just know there’s precedent for a designated creative being immoderately inspired by an established master—a now-departed appointed poet once passed off Tupac as if the words were his own. [BuzzFeed story]

Bureaucratic bigwigs guilty of misconduct or mismanagement could have their bonuses yanked under this year’s performance agreements. [iPolitics story]

What they don’t know can hurt you: Technically it’s illegal for parties to hawk your data to third, well, parties, but practically the elections oversight body won’t know if they do. If only the government were advancing a voting-related bill through the House into which new privacy regulations could have been rolled. (It is, and they haven’t). [Global News story]

Not only do three MPs celebrate their birthdays today—salutations to Ted Falk, Cheryl Gallant and Wayne Stetski—but two came into the world on the very same day: Gallant and Falk, both Conservatives, were born in 1960. Stetski, a New Democrat, has eight years on both.

All three MPs represent rural ridings: Falk the southeastern chunk of Manitoba, Gallant the Ottawa valley, and Stetski the B.C. interior. Were they to look for other points of common interest in the opposition lobby, they could do worse than muse about the Canadian Pacific Railway.

That’s because on this day in 1887, CPR Engine No. 374 steamed into Vancouver for the first time, having traversed a transcontinental route that passed through all three of their modern-day ridings.