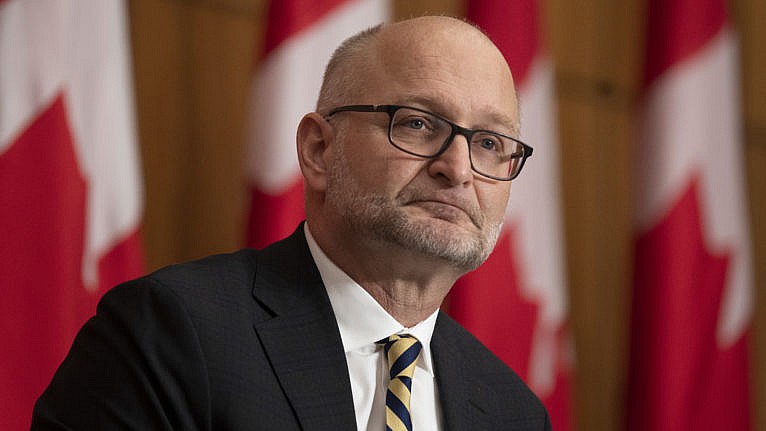 Minister of Justice and Attorney General of Canada David Lametti at a news conference on December 7, 2021 in Ottawa. THE CANADIAN PRESS/Adrian Wyld

These letters are essentially marching orders for each minister, in which the prime minister spells out his expectations and priorities, calling on his front bench to act on certain campaign and throne speech commitments. During a press conference discussing the second piece of legislation he’s tabled in recent days, Justice Minister David Lametti said Tuesday that he has yet to see his mandate letter. Responding to a reporters’ question about a promised Black Canadians justice strategy, Lametti said he couldn’t get into specifics “until we see the mandate letters.” Asked whether he knows when he will receive his mandate letter his response was: “I wish I did, I’m hoping it’s soon.”

The allegations against Edmundson date back more than two decades, to when he was a lieutenant-commander overseeing training at the naval officer training centre in Esquimalt, B.C. Retired Canadian Forces member Stéphanie Viau went public with her allegations in March in a CBC News story.

Viau alleged that Edmundson raped her onboard HMCS Provider in early November, 1991, while the ship was docked in Pearl Harbor. Edmundson’s lawyer, Brian Greenspan, said his client denies the allegations.

“Vice-Admiral Edmundson continues to deny any suggestion of criminal misconduct and looks forward to the opportunity to restore his distinguished reputation for service to our country,” Greenspan wrote in a statement to CBC News.

Fewer minimums: The Liberals introduced a bill Tuesday that would repeal mandatory minimum penalties for drug offences and some gun-related crimes, CP reports.

The bill would allow a judge to exercise discretion in imposing sentences that relate to the facts of the case, including considerations of the individual’s experience with systemic racism and whether they pose a risk to public safety. The legislation would allow for greater use of conditional sentences, including house arrest, counselling or treatment, for those who do not threaten public safety. It also would require police and prosecutors to consider alternative measures for cases of simple drug possession, such as diverting individuals to treatment programs, instead of laying charges or prosecuting.

Chinese warning: Beijing’s ambassador warned that Canada risks driving away Chinese investors and companies if it bans Huawei from its 5G network, the South China Morning Post reports. Cong Peiwu said he hoped Canada had learned a lesson from the outcome of the “Meng Wanzhou incident.”

The warning is contained in briefing documents drafted for Canadian Security Intelligence Service Director David Vigneault in preparation for a meeting he had with Prime Minister Justin Trudeau earlier this year. That meeting focused on the rise of foreign interference in Canada — something CSIS says has become “more sophisticated, frequent, and insidious.”

Boycott: In Maclean’s Aaron Hutchins looks to the Beijing Olympics and the question of whether Canadian athletes should be in attendance given China’s human rights abuses.

“Canada should not be going,” says David Mulroney, Canada’s ambassador to China from 2009 to 2012. “I feel terrible for the athletes, but I feel worse for Uighurs who are imprisoned. There are no good outcomes here. But participating in the Games as a genocide is happening is profoundly wrong.”

Repatriation details: In the Star, Tonda MacCharles has an interview with outgoing Chinese ambassador Dominic Barton, who shares some interesting details about the repatriation of the two Michaels.

He said Kovrig and Spavor, who had known each other casually before their arrests and were aware of each other’s plight, saw each other for the first time just before the flight. “They came into the room and then …” Barton paused, choked up. “Them seeing each other was pretty special, you know. They had their bags, they were given clothes, like sort of jacket and slacks to wear, but when they walked into the room, that’s the first time they’ve seen each other. And … it was just emotional, they hugged each other.”

Unimpressed: In the Globe, John Ibbitson writes that Mélanie Joly went too far in her praise of Barton.

New mandates: The Liberals announced Tuesday they will impose COVID-19 mandates on banks, telecommunications companies and all other federally regulated workspaces, Reuters reports. The new rules would come into effect in early 2022.

The ruling Liberals had initially promised to help most federally regulated sectors with vaccinations. But they are now taking a firmer line. Data show that almost 15 per cent of Canadians above the age of 12 are not fully vaccinated yet at a time when the new Omicron variant of the coronavirus is starting to spread.

Pressing pause: The Ontario government announced Tuesday it is extending its pause indefinitely on moving to the next step of the reopening plan as COVID-19 cases continue to increase, CTV reports.

Ontario warning: Ontario’s science advisory table warned Tuesday that Ontario could see between 250 and 400 COVID-19 patients in ICUs in January, not accounting for the presence of the Omicron variant, CBC reports.

MPP ejected: Cambridge MPP Belinda Karahalios was removed from the Ontario legislature on Tuesday morning by Speaker of the House Ted Arnott, Global reports. Karahalios, who tested positive for the coronavirus last month, initially refused to leave and had to be escorted from the building.

Grim quarantine: Health Minister Jean-Yves Duclos said Tuesday that the conditions reported in some of the federal government’s quarantine hotels are “totally unacceptable,” the Globe reports.

On Monday, The Globe and Mail reported that travellers who are required to stay at the quarantine facilities pending a negative test result were met with unsanitary conditions and not released until days after getting a negative result

Duclos said PHAC should do better: “I asked public health to do the job it needs to do, which is to make sure that the standards are met by the service providers,” he told reporters outside of the House of Commons.

Ford victory: Doug Ford had a legal victory on Tuesday when an Ontario Superior Court judge has ruled that controversial restrictions on campaign advertising do not violate constitutional rights, the Star reports.

Justice Ed Morgan dismissed a challenge by the Working Families coalition of unions, saying the government’s amendment to the Election Financing Act “does not infringe the right to vote” guaranteed by the Canadian Charter of Rights and Freedoms.