Canada's mayors to party leaders: 'Thanks!' 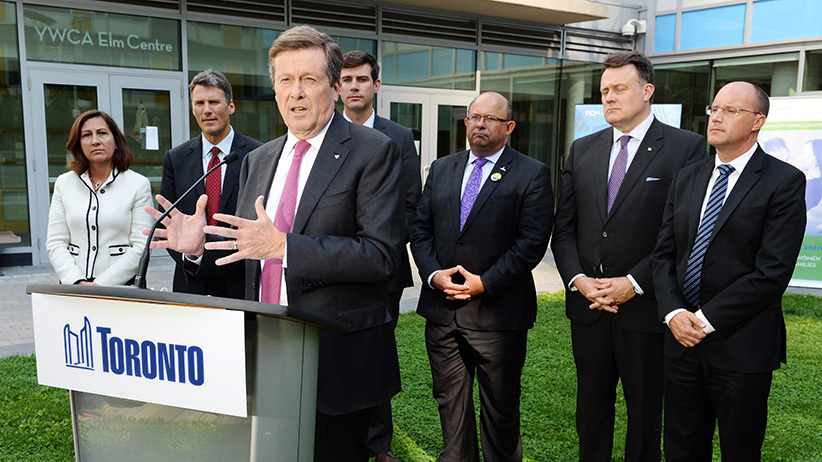 Canada’s big-city mayors have a message for the major federal parties, and it falls under the heading of “man bites dog.”

“All three have made commitments to the establishment of permanent, national transit funding for the first time Canadian history,” enthused John Tory, the mayor of Toronto, flanked by five fellow mayors of sizeable Canadian metropolises. “This should represent the beginning of a time in which cities can actually plan, knowing what funding will be available from the federal government.”

Yes, you heard that right. The most practised gripers outside Canada’s annual gathering of provincial premiers are paying the feds a compliment. They’re getting transit and infrastructure funding right. And hey, that’s a start.

It was, of course, a candy coating for the next big ask, which is money for affordable housing. The so-called “Big City Mayors Caucus” of the Federation of Canadian Municipalities exists, more or less, to squeeze cash out of Ottawa and the provinces, and on Thursday, they gathered in Toronto in hopes of getting housing onto the agenda of the federal campaign. Elections, they know, are the best time to extract promises that can later be spun into government commitments. You don’t get your share if you don’t put your hand out.

But the velvet glove this time was a welcome and novel twist. More than buttering up the eventual election winner, the mayors were holding up a model for shared-funding initiatives in the future—one that has the added benefit of common sense. Long-term funding commitments allow cities to plan, they noted, and—here’s a shock—planning produces good results. Of that, the mayors had the convenient example of the complex where they stood: funded 53 per cent by the YWCA and 47 per cent by three levels of government, the $80-million Elm Building is a bright, welcoming and safe environment that houses low-income women and their children. They couldn’t stop gushing about it.

So they have have framed their new request accordingly. For affordable housing, the mayors would like something akin to the permanent funding commitments the parties have issued for transit and infrastructure. Their spokesman on this day was Gregor Robertson, the left-leaning mayor of Vancouver and chair of the big-city caucus, who stood alongside the fiscal conservative Tory, as well as his counterparts from Edmonton, Halifax, Kitchener, Ont., and London, Ont. Not ideological bedfellows, all of them. But some friendships are convenient, and to give them their due, the message was unified.

The parties can start, said Robertson, by promising to sustain existing funding through the Canada Mortgage and Housing Corporation to maintain and repair social housing. “It’s starting to expire, and we don’t have commitments to maintain it.”

They must also realize, he said, that urban housing is an economic issue as well as a social one—a line seemingly directed at the Conservatives, who have trouble making a welfare-based case for social housing to their voting base. Tory described the “double whammy” that runaway house prices in Vancouver, Calgary and Toronto have inflicted on working families: “They have no affordable housing within a reasonable distance of their work, and no transit to take them to work from a place they can afford to live.”

“It’s not sustainable for the maintenance and creation and attraction of jobs to our cities,” Tory said, “which are the engine of growth in this country.”

Added Robertson: “Investing in housing is an incredible boost for the Canadian economy. It puts people to work building housing and it enables working people in our cities to live securely, close to where they work.”

So what are the parties saying about housing?

Actually, a fair bit. The NDP has promised to maintain existing affordable housing agreements, spending up to $650 million annually by 2019-20. The party is also proposing $500 million in incentives to build 10,000 affordable and market rental housing units in 2015-2016.

The Conservatives have proposed a package of incentives and tax credits, including a four-year, $150-million initiative that would allow social housing providers to pre-pay long-term mortgages without penalty. They’ve pledged to raise the maximum withdrawal amount on RRSPs from $25,000 to $35,000 for the purchase or construction of a home.

The Liberals, meanwhile, say they’ll make social housing and seniors facilities a priority under their broad-brush promise to provide $19.7 billion over the next decade for “social infrastructure” (mind you, that would include early learning and child care, as well as cultural or recreational facilities). The Grits also promise to renew “federal leadership on housing” with a national housing strategy while eliminating GST for investments in affordable rental housing.

The devil, it goes without saying, will be in the details of all these plans. But they all result from pressure applied by city governments, who are convinced that the feds have been slinking away from commitments to social housing they forged themselves half a century ago. Drawing Ottawa back is easier said than done. The Tories prefer market solutions to housing shortages, while fiscal pressure would almost certainly limit the commitments of the NDP or Liberals.

But the mayors appear to have absorbed at least one fact of inter-governmental politics: namely, you can attract more flies with honey than with vinegar—and certainly more than you can with whine.