One in four Canadians hate their political opponents. And these polarized voters are no fans of Trudeau. 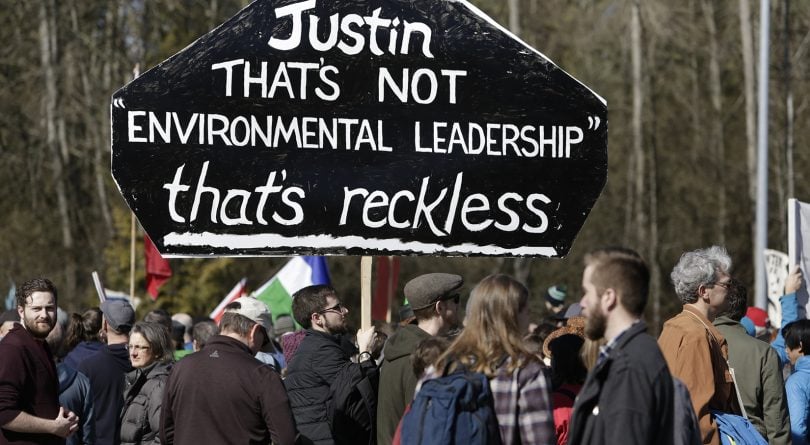 Coast Salish Water Protectors and others demonstrate against the expansion of the Trans Mountain pipeline project in Burnaby, B.C., on March 10, 2018. (Jason Redmond /Getty Images)

Maybe it’s the meanness of social media or the low bar set by Donald Trump, but politics—as Justin Trudeau and Andrew Scheer have both warned—is feeling nasty in the run-up to next fall’s election. Figuring out how many voters really fall into camps of mutual loathing, though, is tricky. After all, even loyal partisans are sometimes open-minded rather than ideologically blinkered.

To try to sort out who’s truly hardline, the polling firm Abacus Data asked a set of questions meant to probe polarization among Canadians, and provided the findings to Maclean’s. The pollster counted as “polarized” anyone who answered that they hate Liberals or hate Conservatives, while also disdaining compromise or viewing people who don’t vote like them as their enemies.

By that combined test, 26 per cent of the population counts as polarized, leaving 74 per cent somewhere between extremes. The polarized group is fairly evenly split between left and right: 47 per cent would vote Conservative today, while a combined 45 per cent back the left-of-centre options—21 per cent Liberal, 16 per cent NDP and eight per cent Green.

For Trudeau, the findings point to growth potential among the non-polarized majority, but not much upside in pitching to the polarized quarter. Asked generally about how Canada is faring under him, 50 per cent of non-polarized voters agreed it’s “headed in the right direction,” while only 32 per cent of the polarized group concurred with that sunny prognosis.

On Trudeau’s handling of immigration and refugees—another election-year hot button that’s bound to be pressed repeatedly by Scheer—59 per cent of polarized voters think the Prime Minister is doing a poor or very poor job, far higher than the 34 per cent of non-polarized voters who sharply disapprove.

In some other areas, though, favoured Conservative themes look solidly popular no matter which group is under the microscope. For instance, 75 per cent of polarized voters agree that Canada needs “deep cuts to taxes,” but even among the non-polarized majority, a sizable 58 per cent want to see those cuts.

Abacus conducted the survey Dec. 13-18 online with 2,000 Canadian adults, weighted to match the population for age, gender, education and region.