The company's White House correspondent typifies its push to feed the world-wide appetite for wild-eyed rhetoric. And he's a keen fan of fantasy. 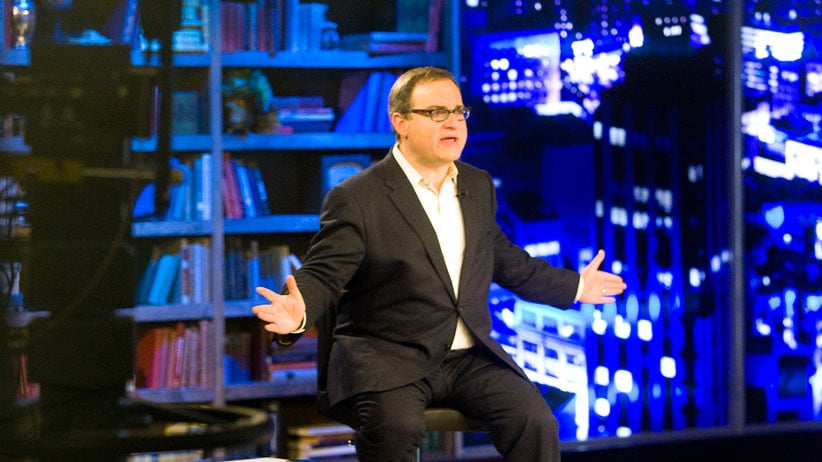 Levant, once star of the now-defunct Sun News Network, has led Rebel Media into the company of the world’s top purveyors of conspiracy and far-right bombast

Until last summer, before Jack Posobiec began his new life as a pro-Trump activist and had his own journalist’s microphone at White House press briefings, pretty much all he tweeted about was Game of Thrones. His Twitter name was @AngryGoTfan, and he wrote exclusively in ALL-CAPS. Trump came up in his musings once in a while–though no more often than in any other American’s last year–but most often those tweets, too, incorporated the HBO fantasy show. Posobiec would compare Trump’s Mexican border wall to the series’ massive northern barrier, or call him to battle against the “khaleesi” (the conquering queen) Hillary Clinton. He regularly promoted the piece of fan fiction he wrote for his GOT blog, a short romantic scene about Trump and Sansa Stark, the aristocratic redhead.

“The first time Donald Trump locked eyes with her, he built a tower straight to Sansa’s heart,” Posobiec begins. At story’s end, Sansa’s hand reaches for Trump’s and she flirtatiously says: “You’re hired.”

In the Trump era, the star-making machinery whirrs fast and weird. Working for Breitbart segues to a desk at the White House; a savvy white supremacist becomes a movement’s cover boy; and one of the left’s most beloved Trump critics writes for Teen Vogue. And Jack Posobiec has unstuck his caps-lock button, stopped yelling about Game of Thrones and got a job as a Canadian media outlet’s conspiracy-minded Washington bureau chief, as part of quest to become a more global purveyor of firebrand activism and right-wing paranoia.

He’s landed at the caustically conservative Rebel Media because its boss Ezra Levant operates his own unusual star system. One of his regular commentators, Jay Fayza, is a McMaster University undergraduate who Levant spotted in a video confronting liberal protesters. “This guy doesn’t care what the social justice warriors think of him. He’s unbreakable,” says Levant, the self-dubbed “Rebel commander.”

Posobiec went to the Rebel instead of an American conservative outlet because, he tells Maclean’s, Levant’s the only one who asked him. In a brief email exchange, he explains it’s a “worldwide” audience with 725,000 YouTube followers and growing. “I loved the way the Rebel combines credible reporting, debunking the mainstream media, and advocacy,” the new correspondent says. The website sits high in regard south of the border among those at the far-right edges of America’s conversation, for whom Fox News is too tepid and CNN deserves every epithet Trump can fling at it.

Levant terms Posobiec a “contrarian,” a term he likes to apply to many of his YouTube stars. “I like that he’s Trumpy, an outsider,” he adds.

Sure, he’s Trumpy. The guy rose to prominence late last year as a booster with the group Citizens for Trump. He defends the embattled president, still. He routinely calls major media stories that counter Trump narratives fake; likewise FBI and CIA conclusions that Russia did in fact hack the Democratic National Committee. Posobiec also has a Trumpy penchant for spreading conspiracy theories constructed out of flimsy or non-existent wisps of fact. In his world, everybody is funded by progressive billionaire George Soros, the Syrian president’s chemical attack on his people was maybe faked, and, most notoriously, he was a principal citizen investigator in last year’s “pizzagate” fantasy about a Washington pizzeria, Democrats and a child sex ring (he had suggested the shooter who later visited the restaurant was a “false flag” actor planted to squelch further digging).

He got international attention again this month as the first person to tweet about the trove of purported emails from French president Emmanuel Macron’s campaign, which Posobiec tweeted he found on 4chan/pol, the alt-right’s preferred message board (widely suspected as another foreign hack; Posobiec dubbed it #macronleaks). The newly minted rebel seized on a dubious report claiming an email exposed a Macron aide buying drugs with Bitcoin (just stay with us here), and then wove that into a narrative less realistic than Trump hooking up with a Seven Kingdoms princess: “It may be that [liberal globalists] found this guy very, very young and they found a way to essentially turn him into a puppet, turn him into a marionette and they’re plying him with drugs, keeping him drugged up and getting him to do whatever they want…  the same kind of mind control they use for celebrities, for actors, for musicians that we see around the world.”

In an email, Posobiec stood behind this claim, basing it on material from the Macron email dump published on the conspiratorial site Gotnews.com, run by a fellow who is banned from Twitter and has a penchant for claiming world leaders are gay. Posobiec’s wild story about the Macron aide did not appear on Levant’s Rebel site, to be fair. He floated it last week to Alex Jones’ Infowars, the reigning champion of conspiracy theorizing that Hillary Clinton is literally the devil and the Sandy Hook school shooting never happened.

“As to spicy stories, I tell our team, the facts of the world are crazy enough—there is never a need to indulge in conspiracy theories,” Levant tells Maclean’s. Though after Quebec police arrested a white man for a mosque shooting earlier this year, his correspondent Faith Goldy suggested rather forcefully that the idea Muslims could be victims of a hate crime was fishy. The federal Liberals’ anti-Islamophobia motion wasn’t just a threat to free speech, she said, but a case of “rising sharia.” And late last year, well before Jones himself apologized for his pizzagate antics, Levant said in an interview his supporters wanted him to investigate the story. “That story is not alive but it’s not dead. It has not been debunked. It’s not live enough or approved for us to go with,” he told Maclean’s in December. “And believe me, I get emails saying we should do it.” 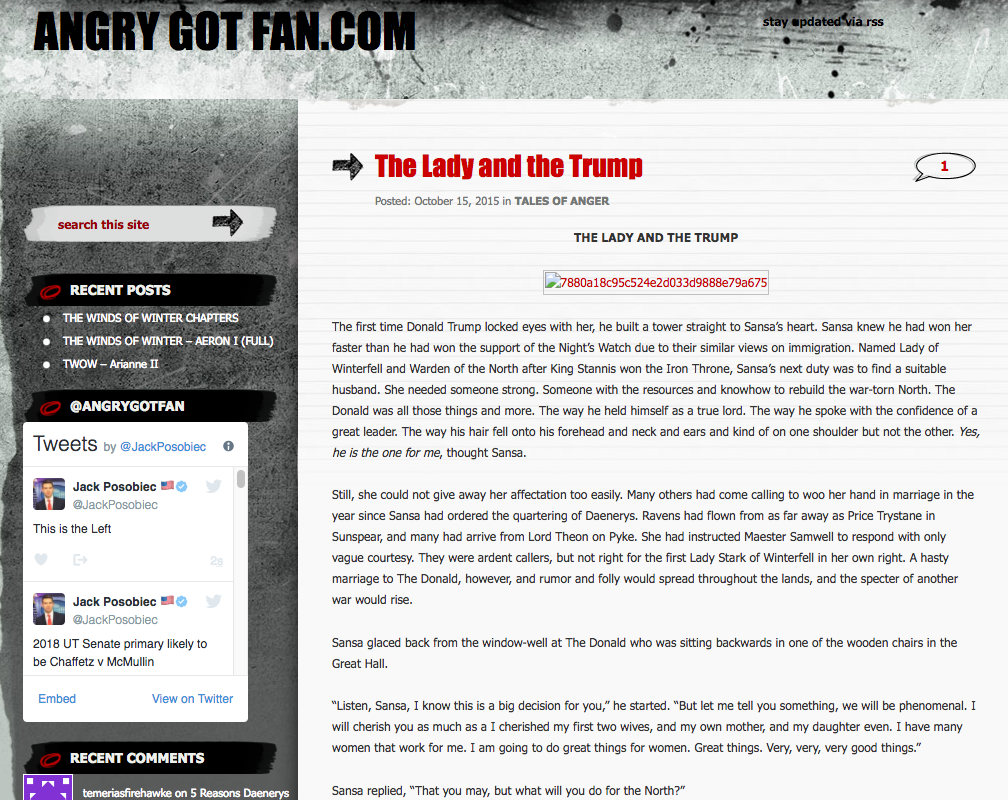 With his latest rookie journalist and budding conspiracy-monger in Washington, Levant gains in his growing roster a star of pro-Trump new media, who helped organize the “Deploraball,” the sort of media wing of Trump’s inauguration weekend in January. Shortly after that event, Levant reached out to Posobiec; he signed on as a Rebel correspondent in April, and got White House press access this month, a patina of credibility Trump’s administration has granted to various non-traditional conservative outfits. On Tuesday, as Russia and James Comey scandals added up to a disastrous and murky day for Trump, Posobiec repeatedly shouted to the president and a cabinet secretary: “What about Seth Rich?”—a dark and bogus story alleging that a slain Democratic aide, not Russians, spilled to Wikileaks.

Though Posobiec reports for a Canadian company, there’s no Canadian perspective on his America-First work—don’t expect NAFTA takes from the Pennsylvania-bred former Navy officer. Canadian eyeballs aren’t really what Levant’s after anymore, or what he’s getting. Canadians now make up less than 30 per cent of his website’s viewership, down from half earlier this year, according to analytics trackers Alexa and Similarweb. Its American traffic nearly matches the Canadian, something which started well before Posobiec with Rebel Media’s habit of flying staff to sites of major Muslim-involved shootings and the bombast of Canadian-born Vice co-founder Gavin McInnes, who has his own pro-Trump group, the decidedly chauvinistic and streetfight-ready Proud Boys.

Rebel Media has meanwhile added correspondents in Australia and Britain, where readership upticks suggest that Levant—this former Reform Party aide and Stockwell Day spokesman—is on his way to becoming a far-right media mogul with global reach. After Sun News TV channel collapsed in 2015, he saw a wide-open market for unadulterated, far-right conservatism in Canada; he’s chasing the same opportunity abroad. Overseas, his deputy rebels communicate to local audiences rather than Canadian ones, touching on issues Levant claims established media there don’t touch: in Australia, anti-feminism and immigration issues; in England, almost singularly crimes for which Muslim men have been arrested. New Rebel provocateur Tommy Robinson used to lead the anti-immigrant English Defence League but left it over worries about far-right extremism–then founded another one. With the Rebel, he’s made a habit of videotaping himself confronting and yelling “scum!” at brown people outside courthouses and out of court, street-gang antics which got him arrested last week under British contempt law. He wishes Trump’s ban on Muslim countries went farther, and he’s organized a campaign and rallies in Sunderland in support of a woman allegedly raped in a case for which six Mideast immigrants were arrested and released without charge.

Rebel Media also sent a Quebec radio host Eric Duhaime to France for weeks to root for nationalist Marine Le Pen’s presidential bid and hit Emmanuel Macron with whatever they could find, reporting on the Macron “leaks” when others wouldn’t. It appeared in French at lerebelle.media. When Macron scored one for the pro-refugee and pro-European Union sides, Levant himself predicted apocalypse: “I predict a spike in tourism to France. One last time to see the Eiffel Tower before it’s bombed, Notre Dame before it’s a mosque.”

The Rebel’s initial push two years ago as an anti-Notley, anti-Trudeau outfit also decrying Muslim immigration in Canada has delved so deeply so much into pro-Trump, pro-Le Pen, pro-Brexit anti-Muslim-immigration-everywhere fare–and generally darker, more ardent polemics–that Levant recently split its website and YouTube presence into two subchannels: Rebel Canada and the Rebel Edge, a sort of global edition. “There is no opinion too offensive,” a montage of commentators say.

Despite Posobiec’s newly exalted status in the White House press corps, and his 117,152 Twitter followers, his YouTube hits for the Rebel‘s main site don’t suggest his fans have followed him there, and editors have kept him off the Edge page thus far. Perhaps they’re waiting for him to figure out this journalism thing, leaving his trolling life behind–he decidedly invented his Quebec-based Rebel colleague’s role in the Macron leaks affair when speaking to a La Presse reporter; then, when he realized serious reporters take answers they get seriously, he offered a counter-story, and subsequently apologized for the hash that followed.

Levant chalks that up to “bumps in the road” on a path from political activist to journalist-activist that he himself followed. Duhaime, the Quebec contributor suddenly facing heat at home for conspiracy-peddling, disavowed his fellow Rebel, suggesting on his Quebec radio show that Posobiec was a “bit of an bizarre character” who liked media attention and the chance to say wacky things, according to La Presse.

But the ever-strong popularity of partisan hoaxes and racial polemics suggest an international audience that wants just that. Ezra Levant remains willing to capitalize on the demand.