And with another pipeline spill, it's hard to see how the newest provincial blueprint for an energy strategy will accomplish anything 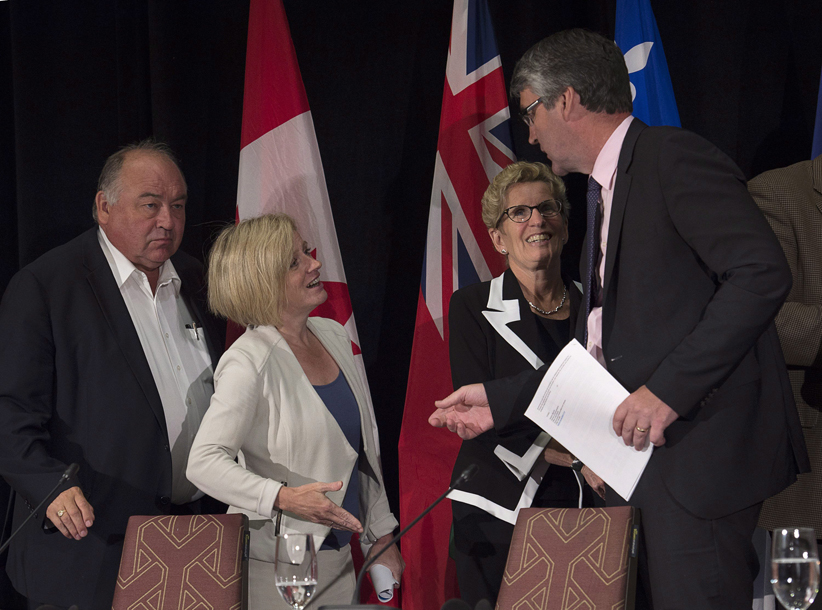 The scene: A meeting room in the Quebec legislature, February 2016. An immaculate wood table with chairs around it, the most august ones occupied by Alberta Premier Rachel Notley and Quebec Premier Philippe Couilllard. Tense aides surround them.

Philippe: As I said, call me Philippe.

Rachel (forces smile): Philippe, please allow me to once again request a strong public endorsement for the Energy East pipeline. The prosperity and benefits will be felt well beyond my province and into yours.

Philippe: This is a tough sell for the people of Quebec.

Senior aide Brian (whispers to Rachel): Remind him of the strategy.

Rachel: Of course, Monsieur Philippe, you will recall the Canadian Energy Strategy all premiers signed, only last summer. We agreed, all 10 of us, that “our country must have the necessary pipelines, electricity systems and other energy infrastructure to move energy products” and “facilitate national energy self-sufficiency and independence.” And that we should also speed up decision-making processes.

Philippe: Does the strategy says all that? That’s not very definitive. I also recall the document says “a lower carbon economy requires changes in behaviour and in finding new ways of doing things.” And that latest spill near Red Deer brings to mind that line about ensuring “the safe and responsible transport and transmission of energy products.”

Rachel: Does the strategy say all that? That’s not every definitive.

Intergovernmental relations intern Justine: It also says the provinces must strengthen energy systems against the threat of cyber attacks.

Former Alberta premier Alison Redford launched Canada’s premiers toward devising this energy strategy in 2012. In a bid to be a champion of pan-Canadianism like her predecessor mentor Peter Lougheed, she aimed to secure a strong embrace of oilsands development, as well as the pipelines the land-locked sector has struggled to move ahead with, due to environmental, aboriginal and much provincial political resistance. Redford emerged from political exile Friday to hail the realization of her national project: “It comes with the potential for the premiers—acting with common purpose—to rise above historical tiffs,” she wrote in the Globe and Mail.

It should not surprise Redford nor anybody else that getting all of Canada’s premiers on the same page means that page isn’t going to say much of anything substantial. The document, released at the annual premiers’ gathering Friday in St. John’s, firmly commits the provincial leaders to identify all sorts of things: priorities, needed investments, research gaps, and opportunities galore. But that’s just the pipelines and transmission section. The strategy also speaks of greenhouse gas emissions often, and aspirations for options toward an “integrated” carbon reduction strategy in a lower-carbon economy. Any talk of absolute cuts was reportedly stripped from the final version.

How would it change the game on the pipeline debate? After the announcement Couillard said his government would stick to the seven conditions he and Ontario’s Kathleen Wynne urged Transcanada to meet before blessing the Energy East bitumen pipeline. British Columbia’s Christy Clark said convincing the public of environmental responsibility is “the only way we can get to yes” on energy projects. Summit host Premier Paul Davis called the document “monumental,” but in a call with Alberta reporters Notley referred to the strategy as “more of a discussion document. It’s an educational tool.” A 36-page framework that dared not call itself a framework, lest it lose its veneer of action and goals.

Perhaps this is all unfair. Perhaps criticizing a 13-premier consensus document as wishy-washy is too obvious, like complaining the latest speech from the throne was short on details. The annual Council of the Federation summits seldom yield announcements with this much seeming national significance. But this document even pales to its less-known predecessor document, the 2007 meeting’s A Shared Vision for Energy in Canada. It spoke some Stephen Harperese, calling Canada an “energy superpower on the world stage.” A year after Enbridge first announced its bid for a Northern Gateway pipe to the B.C. coast, well before Redford led Alberta, this strategy cautioned that “insufficient infrastructure capacity prevents development of some resources” and urged “new and expanded pipelines” for fossil fuels. It similarly lacked solid action items—as though they’d have budged any premier’s position—but the language was crisper. It’s telling that the updated document, championed by an Alberta premier, has less bite.

Since 2007, the petroleum industry’s demands for extra pipeline capacity have only grown more urgent, as the proposed project list keeps growing. (Arctic Gateway, the latest dream, was floated again this week). But the larger bubble to swell is the environmentalist-fuelled public anxiety over pipeline safety. Nexen’s explanation and apology for a five-million-litre spill of a bitumen-sand slurry south of Fort McMurray actually overlapped with the end of the premier’s news conference. “The timing is not awesome,” Notley told CBC Radio earlier in the day. (Dude, no kidding.)

Notley, the third Alberta premier since Redford, sounded like Tories past on Friday, after criticisms earlier in the week from media and Saskatchewan’s Brad Wall that she was appearing too conciliatory. The NDP premier stressed that pipelines are the safest way to transport product, that the provincial energy regulator will thoroughly investigate the rupture, and that newer pipelines are much safer and more reliable than the aging infrastructure that spiderwebs across Alberta and Canada.

Although in this case, the double-walled pipeline had been installed less than nine months ago. Shutdown systems weren’t activated, and the sprawling spill was noticed by a contractor walking by.

Wall, used to having a conservative Alberta premier to serve as the summit’s main energy sector cheerleader, appointed himself to the task this week, and in so doing likely inspired some right-wing Albertans to mull launching the Saskatchewan Party of Alberta. He protested that “oil” and “gas” aren’t four-letter words.

Pipeline, however, remains a pair of four-letter words, and it’s hard to see exactly what consensus the premiers reached Friday to change that reality.