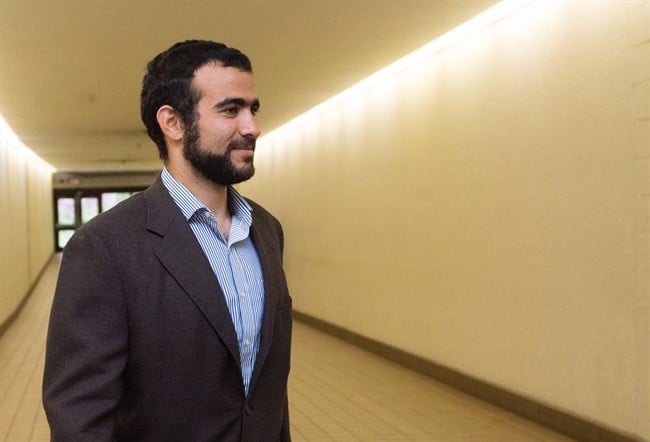 Omar Khadr leaves court after a judge ruled to relax bail conditions in Edmonton on Sept. 18, 2015. THE CANADIAN PRESS/Amber Bracken

OTTAWA – The federal government has formally apologized to former Guantanamo Bay inmate Omar Khadr for any role Canadian officials may have played in his mistreatment while in U.S. military custody.

“Today, we are announcing that the government of Canada has reached a settlement with Mr. Omar Khadr, bringing this civil case to a close,” the statement reads.

“On behalf of the government of Canada, we wish to apologize to Mr. Khadr for any role Canadian officials may have played in relation to his ordeal abroad and any resulting harm.

“We hope that this expression, and the negotiated settlement reached with the government, will assist him in his efforts to begin a new and hopeful chapter in his life with his fellow Canadians.”

Goodale and Justice Minister Jody Wilson-Raybould were scheduled to hold a news conference in Ottawa shortly after the statement was released.

The statement does not confirm any payment details, nor media reports that the money has already been paid. “The details of the settlement are confidential between Mr. Khadr and the government.”

Speaking on condition of anonymity, a source familiar with the situation told The Canadian Press that the government wanted to get ahead of an attempt by two Americans to enforce a massive U.S. court award against Khadr in Canadian court.

“The money has been paid,” the source said.

Word of the quiet money transfer came on the eve of a hearing in which a lawyer planned to ask Ontario Superior Court to block the payout to Khadr, who lives in Edmonton on bail.

The Toronto lawyer, David Winer, is acting for the widow of an American special forces soldier, Chris Speer, who Khadr is alleged to have killed after a fierce firefight and bombardment by U.S. troops at a compound in Afghanistan in July 2002, and another U.S. soldier, Layne Morris, who was blinded in one eye in the same battle.

Tabitha Speer and Morris two years ago won a US$134.1-million default judgment against Khadr in court in Utah. Khadr was in prison in Canada at the time, after being transferred in 2012 from Guantanamo Bay, where he had spent 10 years.

Legal experts have said the application, aimed at getting any money Khadr might be awarded to satisfy the Utah judgment, would be extremely unlikely to succeed, in part because Khadr’s conviction in Guantanamo Bay runs counter to Canadian public policy.

The American judgment was based almost entirely on the fact that Khadr pleaded guilty to five war crimes – including killing Speer – before a military commission, which has widely been condemned.

Khadr, now 30, has long claimed to have been tortured after American forces captured him, badly wounded, in the rubble of the bombarded compound. He said he confessed only to be allowed to leave Guantanamo and return to Canada, because even an acquittal would not have guaranteed him his freedom.

In a statement issued shortly after the apology was released, Khadr’s lawyer, Dennis Edney, savaged the way his client was treated by the former Conservative government of Stephen Harper.

He cited a 2010 Supreme Court ruling that said Khadr’s treatment “offends the most basic Canadian standards” of how youth suspects ought to be handled.

“After more than a decade of Ottawa failing its moral and legal obligations to defend Khadr’s human rights, prime minister Trudeau has made a formal apology and financial settlement. He is to be congratulated in taking such a principled step, despite the hateful comments from others, including members of the former Harper administration.

“These individuals choose not to face the truth, preferring to trade in bigotry and divisiveness.”

Supporters have also long pointed to the fact that he was just 15 years old when he committed the acts he confessed to – and therefore he should have been treated as a child soldier in need of protection, not prosecution.

Word earlier in the week that the government was planning to pay Khadr and apologize to him sparked anger among many Canadians who consider him a terrorist now profiting from his crimes.