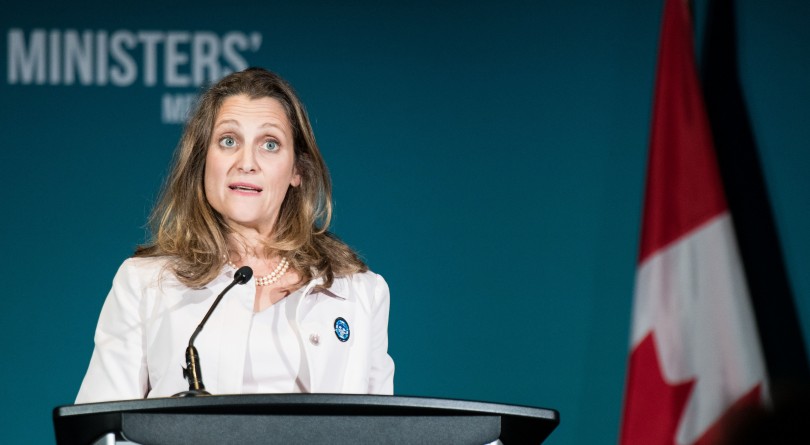 WASHINGTON—Apprehension was giving way to measured but mounting confidence Sunday that the fall finale to Canada’s long-running NAFTA drama may finally be at hand—with the famous unpredictability of the man in the White House giving all involved cause for caution.

Foreign Affairs Minister Chrystia Freeland and Ambassador to the U.S. David MacNaughton were in Ottawa taking part in an aggressive, long-distance, last-minute push to get Canada into a trilateral free trade deal with the U.S. and Mexico on the eve of a key congressional deadline.

Central to the discussions Sunday has been an effort to secure some sort of assurances that will allow Canada to avoid the dreaded Section 232 tariffs on steel, aluminum and auto exports, which U.S. President Donald Trump has either threatened or already imposed on national security grounds.

Trade experts briefed on the progress so far say an agreement is well within reach.

“They’re moving towards closing the deal—it’s really not a question of if, it’s a question of when,” said Daniel Ujczo, an Ohio-based international trade lawyer at Dickinson Wright who represents large U.S. automakers and auto-parts manufacturers.

“There’s just a lot going on, and not a lot of time to do it in…. At the end of the day, U.S. negotiators are agreeing, but it still has to be the president that signs off, and who knows where he is on things.”

Both Ujczo and Hassan Yussuff, the head of the Canadian Labour Congress and a member of the federal government’s NAFTA advisory council who was also briefed on the talks Sunday, say the question of how to deal with the 232 tariffs remains the central issue.

Ujczo said while Canada would rather have tariff protection spelled out when the deal is announced, he expects that as a compromise, all three countries will say they plan to meet again in the near future to hammer out the details of a detente on the tariff threat.

Trump, who has already imposed tariffs on Canadian steel and aluminum, has also repeatedly threatened to impose even more crippling levies on auto imports if a deal can’t get done.

Ultimately, Ujczo said he expects Canada and the U.S. to reach a so-called “side letter” to the main deal that would resemble a similar agreement reached last month between Mexico and the U.S., which preserves duty-free access to the U.S. market for vehicles that comply with the agreement’s rules of origin.

Those rules require that a certain percentage of an imported vehicle’s components be manufactured in the United States.

Some have characterized the side letter as effectively establishing a quota on the number of autos that can be exported to the U.S.—anathema to the very principles of free trade. But Ujczo said it would only apply to a very small percentage of vehicles that don’t comply with the origin rules.

“This objection is largely more philosophical than practical—the idea of having quotas as a side letter to a free trade agreement. The practical consequences are limited, if any.”

Ujczo said the two sides have also largely settled on a dispute-resolution mechanism similar to that in the original NAFTA known as Chapter 19—an issue that has long been a major stumbling block in the talks—and on a higher duty-free threshold for goods shipped into Canada: $100, up from $20.

Despite the fact that it’s one of Trump’s favourite talking points, the politically sensitive question of greater U.S. access to Canada’s dairy market is also no longer a hurdle, say sources familiar with the talks.

Yussuff was summoned to Washington on Sunday to be briefed on the progress to date.

Tariffs are “where the focus is,” he said. “They’ve been spending quite a lot of time trying to figure that out.”

Even Prime Minister Justin Trudeau has been reportedly pulled into the fray: on what’s usually a personal day, his itinerary said he’d be spending Sunday in “private meetings.”

Chapter 19 and the 232 tariffs had emerged in recent days as the two biggest challenges in front of negotiators. And the clock is ticking: the U.S. Congress has imposed a Sunday night deadline in an effort to get a deal voted on before Mexico swears in a new government.

A persistent threat of tariffs is “highly unusual in a trading relationship,” Yussuff said.

“People are working hard on the Canadian side, and I’m optimistic we’ll get there, but as you know, these things are complicated.”

Government officials in Ottawa, meanwhile, were playing down reports that a deal is imminent.

The government “is still having constructive discussions” with U.S. counterparts, and “some” progress has been made, said one insider, speaking on condition of anonymity given the sensitive nature of the talks.

“Our focus remains on the substance of the issues—not on timelines—and of course on getting a good deal for Canadians.”