Canadian soldiers are the new deterrents in the Baltics 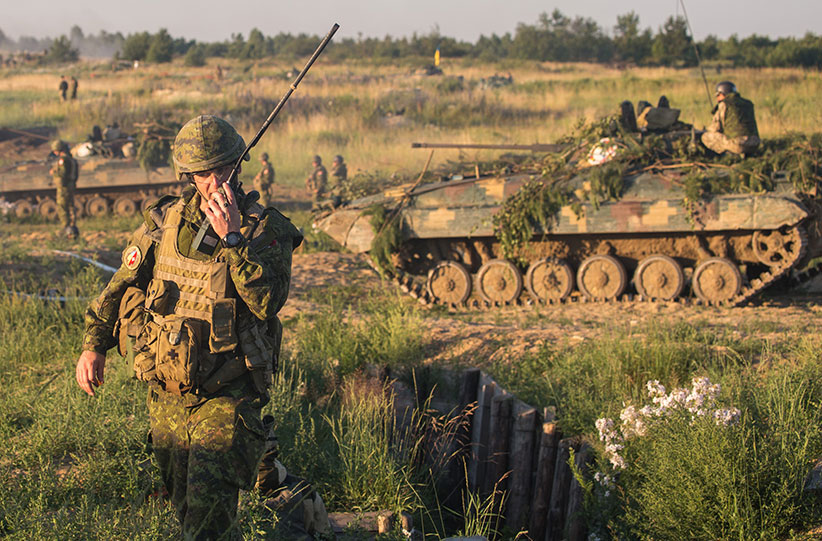 A Canadian soldier sends the signal to begin the simulated attack on a defensive position during a live firing exercise during Operation UNIFIER in Starychi, Ukraine on June 30, 2016. (Joint Task Force Ukraine)

Deterrence. It’s the coldest of the Cold War terms and suddenly, like an old piece of meat left in the back of the freezer, it’s been thawed, reheated and put back on the Canadian military menu. At the recent NATO Summit in Warsaw, Canada announced it will lead one of the four new NATO battle groups based in the Baltics and Poland, sending up to 500 soldiers, six CF-18s and a frigate to Latvia. The cost will be about $385 million over three years. Senior government officials repeatedly described the new force as a “deterrent message” to a “new and rising Russia.” It is a serious contribution to a serious threat and has been widely and rightly supported. It puts Canada in the same league as the U.S., the U.K. and Germany in this mission. The problem is, no one appears to know what, exactly, a modern message of deterrence really means.

Here is part of a transcript of two senior government officials trying to explain to a puzzled media what deterrence the force conveys to the Russians. The transcript was sent to me by the Department of Defence.

Senior government official: “We’re using the word deterrence, but we’re careful to call it modern deterrence. So it isn’t a code or construct with soldiers standing toe-to-toe across a border. It’s not that construct. It’s more agile, more flexible, and recognizes that there are other tools you need to deter. It’s layered deterrence. Do you know what I mean?”

Layered deterrence? No one got that. The official gamely forged on. “So what it’s really saying is, to a potentially hostile force, if you come in, not only are you going to not just stroll on in without a problem, but it’s a multinational force that you’re going to be encountering.”

A multinational response to an invasion isn’t new—that’s been the NATO mandate since 1949—but this is supposed to be a step up from the previous posture of “assurance.” Note that the senior official did not say a Russian incursion will actually be “deterred,” just that it won’t be a “stroll.”

Even that mild description, however, prompted a sudden loss of nerve. Again, this is the actual transcript.

Senior government official one: “I mean, these are, these are not big forces.”

Senior government official one: “They’re not significant forces. If you look at what Russia is doing with forces up to 80,000 folks and snap exercises. This isn’t a threat to Russia, and any rhetoric that you might hear from Russia—”

Senior government official one: “—over the next couple of days that says it is, is clearly ill-founded.”

Okay, it’s a delicate balance to send NATO troops to Europe without escalating tensions with Russia, but the officials were openly dismissing deterrent forces as insignificant, a fact reported by the CBC’s Murray Brewster. A few minutes later, they reduced it to something else entirely: merely a “tripwire.” Meaning?

By this time I was so baffled I asked Justin Trudeau’s former senior adviser on foreign affairs, Roland Paris, to explain it. Paris left Trudeau’s office in June to return to his job as a professor at University of Ottawa, so he knows this file intimately. “Sending a deterrence mission to Eastern Europe and assuming an important leadership role within NATO delivers on the Prime Minister’s campaign commitment to maintain Canada’s strong support for NATO,” he said. “It is part of an approach to Russia that combines deterrence and dialogue, which is the correct approach in my view.”

While this isn’t your parents’ kind of deterrence—the idea of mutually assured destruction, backed up by massive nuclear arsenals and huge land forces­—clearly, the Liberals have changed their campaign rhetoric to a more defensive tone.

“The return of the Cold War in Europe is a clear sign that Canada can’t go soft on defence,” says Fen Hampson, the director of the global security & politics program at Carleton University. “The Baltics are deeply exposed and have been subject to Russian incursions—the kidnapping of an Estonian intelligence officer, cyberattacks and provocative military exercises along their borders. It’s high time we followed the example of our British and Australian allies, who spend two per cent of their GDPs on defence instead of the paltry one per cent we do now.”

Justin Trudeau has made it abundantly clear that’s not going to happen, but Canada is still the sixth-largest contributor to NATO, and Trudeau has just deepened our commitment. The question is, to what?

Don’t be misled. The mission in Latvia is not a classic deterrent, and its message is aimed at both Russia and at NATO itself.

“The entire point here is that symbolism can be meaningful—that a multinational deployment into the Baltics, even one that would get steamrolled, changes Putin’s calculations,” says Stephen Saideman, a professor at the Norman Paterson School of International Affairs. “Now the decision to start the Third World War is in his hands, rather than him acting and then NATO having to figure out whether to respond.”

In other words, in the worst-case scenario of invasion, Canada and its battle-group allies are there to be sacrificed in order to ensure that NATO members don’t back down from their collective obligations. That’s the tripwire. It’s meant to deter NATO from walking away from the Baltics. “The response is now wired in via the dead Americans, Canadians, Brits and Germans who would tie the hands of politicians in a way that dead Estonians would not,” Saideman says, like a true Cold Warrior.

All NATO allies are equal, but some are more equal than others. Including dead Canadians.