Canadians to watch at the Olympics: Christine Nesbitt

The speedskater won gold in Vancouver. She hopes to do even better in Sochi. 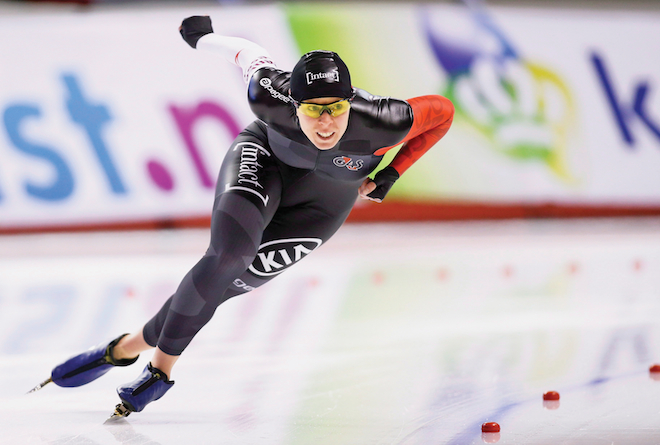 One of the most enduring memories of the Vancouver 2010 Winter Games was speedskater Christine Nesbitt’s victory in the 1,000-m event at the Richmond Olympic Oval. You can look at her win the way most people saw it: a thrilling come-from-behind finish before a home-country crowd to earn Canada’s only individual gold medal in long-track skating. Or you can look at it as Nesbitt saw it: an event favourite who nearly let down herself and her country with a slow start to her race and a mediocre middle. Almost four years later, memories of Richmond still bring a cringe. “That was such a terrible race,” she says. “Still to this day, I’m proud that I won a medal—well, the gold medal—but it’s not how you’re supposed to win a medal. Everyone talks about everything coming together for your Olympic gold medal, and it’s the performance of your life; the stars are aligned and it’s just this incredible feeling,” she says, heaving a sigh. “And mine was like the opposite of that.”

But the thing of it is, some of the most memorable performances, and the true test of champions, are those who draw on their grit and training to overcome adversity and build a win from a tough set of circumstances. Marnie McBean, one of the best Olympic rowers Canada has ever produced, told her as much: “Anyone can win on a good day. You won on a bad day.” But, says Nesbitt, “You want to win on a good day.”

Even Nesbitt has to agree she’s had a great run, post-Vancouver. In 2010-11, she won the overall World Cup title in the 1,500-m, finished second in the 1,000-m and won the World Sprint Championships. Next season she was the champion at both distances, winning every 1,000-m World Cup or World Championship race she entered. She also became only the fourth Canadian speed skater ever to win the Oscar Mathisen Award, named after the legendary Norwegian skater and given for the year’s top performance by a woman or man. That, even Nesbitt admits, “is a really big deal.” Indeed, she’s a bona fide star in those parts of Europe and Scandinavia where chasing a rubber disc is not the only celebrated validation for lacing on skates. She gives credit for a coaching change three years back that sees her skating with Mark Wild and Xiuli Wang, the former coach for retired legends Clara Hughes and Kristina Groves. Wang, she says, is a stickler for the small details that have taken her to a new level. “It’s all those one-per-cents I’ve found that add up to four or five per cent better, which is significant.”

The start of this World Cup season, however, has not gone to plan. Nesbitt has been far from the podium in individual events in both Calgary and Salt Lake City, finishing as far back as 12th in the 1,000-m in Utah—the sort of results she hasn’t seen since her earliest years on the national team.

She said after the Calgary races she’s at a loss to explain her subpar performance, though she admits as a veteran she’s feeling pressure as one of the few Olympic medal contenders on a women’s team still finding its feet after years as a consistent powerhouse. “They bring a lot of positive energy and a lot of excitement, which is great for me as I get older and grumpier,” she said of the younger team. “But definitely there are moments when it feels like I have to carry the team.” That said, she conceded, “I want to be the best, so I have to take that responsibility.”

This season a bad race that got her on the podium would look pretty good. Those who know her have little doubt she has the technique and the fitness level to regain her winning form, but the Olympic clock is ticking. No one will be more frustrated at this faltering start than Nesbitt herself. “Yeah, I work hard and I’m critical of myself,” she said before the start of the season, “but that’s just how I am and how I get the best out of myself.” That attitude can be her best trait, and perhaps sometimes her worst. It’s time to look back at her Olympic gold medal performance and see it for what it really was: not a disappointment, but an inspiration.