Canadians to watch at the Olympics: Tessa Virtue and Scott Moir

The veteran pair will make these Games count 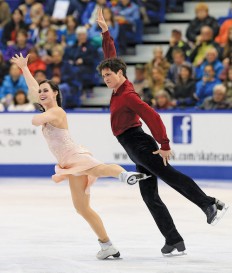 The four minutes that are so imprinted on the memory of Canadians are still a blur to Scott Moir and Tessa Virtue. Their own recollections of the elegant, emotional and perfectly synchronized free dance to Mahler’s Fifth Symphony that brought the home crowd to its feet and won gold at the Vancouver Winter Games mostly revolve around the sense of relief that followed: those moments at centre ice, where they were entwined cheek-to-cheek, listening to the roars and realized that the job was finally done.

The 2010 Olympics had a fairy-tale ending for the ice dancers, but they weren’t exactly fun. The pressure on the young pair—Virtue was just 20, and Moir 22—coming into their first Games as gold-medal favourites was enormous. “I remember going around the village in sort of a haze,” she says. “I knew it was beautiful and amazing and emotional, but I wasn’t really registering anything.”

The fact that Virtue could barely walk only added to the burden. In the fall of 2008, she’d undergone surgery to try and relieve the pain in her shins and calves—chronic exertional compartment syndrome, in the medical lexicon—that had hobbled her for years. Moir spent much of that season training on his own, using a sandbag attached to a hockey stick as a stand-in for his elfin partner. But the fix didn’t work and, by Games time, her legs were worse than ever. It took five hours a day of physiotherapy to keep her out there— a sacrifice that was at the top of Moir’s mind when he whispered, “Thank you so much,” in the moments after they clinched gold.

Thankfully, Sochi promises to be a different experience. Not only are they now hardened veterans at 24 and 26, with two world championship wins over the last four years, Virtue is now skating pain-free. After a second round of surgery in late 2010 again failed to fix the problem, she turned to a physiotherapist and sports scientist who helped her change the way she skates, and even walks, strengthening her hamstrings and glutes in order to redistribute the stress. “It’s the last thing on my mind when I’m out there on the ice,” she says, “which is such a relief.”

And their mindset is now centred on drinking in what will surely be their final Olympics. (The pair, who have a bond as close as any siblings, have been skating together for 17 years.) “My dreams came true in Vancouver,” says Moir. “But reflecting on that has made me think that what I really enjoyed most was the process: the training and working together and creating these programs, which are a piece of us, kind of like a child.”

This season, the pair have debuted two entirely new routines. A medley of Louis Armstrong’s Dream a Little Dream and Ella Fitzgerald’s version of Cheek to Cheek for the short program. And a free dance to instrumental works by two Russian composers—The Seasons by Alexander Glazunov and Alexander Scriabin’s Piano Concerto in F-sharp Minor—is clearly designed to soften up the Sochi crowd. And they appear to be in top form, winning their season opener in Finland, then taking gold at Grand Prix events in Canada and France.

A second-place finish at the World Championships in London, Ont., last spring stung—it’s Virtue’s hometown, and Moir is from Ilderton, a burg of 2,000 just outside of the city. “We weren’t happy,” says Moir. “We wanted to be World Champions before going to the Olympics.” But losing to their friends and training partners, the U.S. pair Meryl Davis and Charlie White, has stoked an already great rivalry. (Davis and White came second in Vancouver and the two teams have evenly split the four Worlds since.) “Right now, I just want that gold medal in Sochi,” says Moir. “Everything in my life is about that.”

The 2014 Games also offer Virtue and Moir a chance at two trips to the podium, with the Olympic debut of the team skating event, where Canada’s best man, woman, pair and ice-dance team will shoot for the best combined score. The drawback is that it means having to be in competition mode for virtually the entire two weeks.

Virtue is also determined to make these Games count. “We’re so focused and hungry for gold again. That’s what gets us up in the morning.” But this time, she’s also vowing to actually enjoy the Olympics. “At some point, we’re going to have to flick the switch,” she says, “to take the pressure off ourselves and bring it in and skate for different reasons— not because there’s a medal on the line, but because we deserve to enjoy the moment. We’ve worked hard for it.”

There’s no debate. After all they’ve given Canadians, Virtue and Moir are due some happy memories of their own.