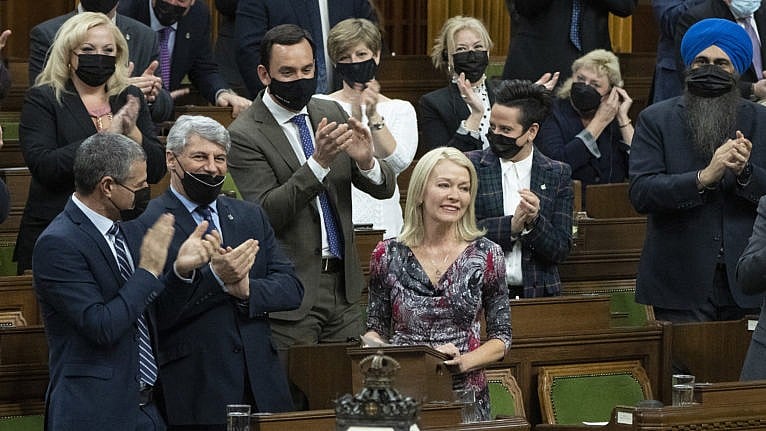 Bergen smiles as she rises for the first time since assuming the Conservative leadership during Question Period, Ottawa, Feb. 3, 2022. (Adrian Wyld/The Canadian Press)

New (interim) Conservative leader Candice Bergen was welcomed to her new job with a resounding standing ovation from her caucus colleagues and a story revealing that she argued that her party shouldn’t ask the Freedom Convoy protesters to go home. Marieke Walsh, reports in the Globe that, while she was deputy leader to Erin O’Toole, she emailed: “I don’t think we should be asking them to go home. I understand the mood may shift soon. So we need to turn this into the PM’s problem.”

While the Conservatives debated the contents of a possible statement on Monday, protesters were outside Parliament Hill for a fourth day, blockading streets and ignoring traffic laws. On Thursday, many businesses remained closed over safety concerns, and residents of the core were on day seven of horns and fireworks disrupting their lives. A Conservative Party spokesperson did not provide a response on Thursday to a request for comment on Ms. Bergen’s stand and whether it has changed.

PPC threat: Global’s David Akin has an interesting Twitter thread pointing out that Bergen, who has spoken up for the protest, comes from a riding where the PPC vote surged in the 2021 election, likely based on objections to health restrictions that brought the convoy of horn honkers to Ottawa.

Fairly popular: The protest, which continues to make life miserable for people in downtown Ottawa, is surprisingly popular with Canadians, according to an Abacus poll in the Post.

Not popular downtown: The protest may be popular across the country, but it is not popular where it is happening. Reuters reports on the growing anger in downtown Ottawa.

The city’s police force has stood idly by as protesters filled jugs of diesel to top up their rigs, which they keep running to provide heat in sub-zero temperatures, rather than cutting off the fuel supply. “For six days and nights, residents living in downtown Ottawa continue to experience unprecedented violence on their local streets,” said city councillor Catherine McKenney in a letter to Prime Minister Justin Trudeau on Thursday.

Mounties called in: After McKenney sent her letter, Mayor Jim Watson got on the phone to Public Safety Minister Marco Mendocino, who announced that the federal government will provide Mounties, CP reports. Don’t expect the army, though.

Earlier in the day, Prime Minister Justin Trudeau played down the notion of a military response to the ongoing Ottawa protest, saying that sending in troops is “not in the cards right now.” One must be “very, very cautious” about deploying troops on Canadian soil in such cases, Trudeau said at a news conference Thursday. “It is not something that anyone should enter in lightly.”

Potential for violence: A counter-protest is being organized for Saturday, which University of Ottawa professor Regina Bateson warned could lead to violence in a worrying Twitter thread.

Poor policing: In the Globe, Gary Mason wonders why the Ottawa police have failed to do a better job managing the situation.

Canadians across the country have looked on at what is taking place in the capital with a mixture of anger and incredulity. Why has nothing been done? Sure, no one wants to see the police moving in right away with batons and pepper spray, but you’d like to see some kind of sanctions for blocking streets and sounding horns at all hours of the day. People have been beaten, tasered and arrested by police in this country for doing far less than these demonstrators. Police won’t even threaten to tow their rigs away and as of Thursday had given out just 30 tickets.

Although police did not identify the accused in a news release, a court document identified him as Jeremy MacKenzie, who was in Ottawa for the so-called truckers’ protest against COVID-19 measures. The host of an anti-authority podcast and YouTube channel, MacKenzie is a Canadian military veteran who served in Afghanistan. The RCMP alleged in a search warrant application that he had post-traumatic stress disorder.

No fund them: MPs are taking steps to haul executives from GoFundMe before a parliamentary committee to “to answer questions about the California crowdfunding company’s ability to screen out hate campaigns,” the Globe reports.

On Thursday, New Democrat MP Alistair MacGregor said the House of Commons public safety committee needs to know what security measures GoFundMe has “to ensure the funds are not being used to promote extremism, white supremacy, anti-Semitism and other forms of hate which have been expressed among prominent organizers of the truck convoy currently in Ottawa.” MPs on the committee unanimously passed a motion to call company officials to testify. The convoy organizers deny ties to hate groups

Tory race: Meanwhile, Conservatives, newly leaderless, are getting ready for a leadership race, the Globe reports. It might take until fall, they said.

Mark Strahl, the MP for the British Columbia riding of Chilliwack-Hope, said he hoped the new leader would be in place by mid-September for the fall session of Parliament. “Due to the minority parliament, we need to get a new leader in front of Canadians, working on their vision, working with our caucus,” he said.

Phones ringing: The Post has a roundup of people whose phones are ringing, including Jean Charest and Patrick Brown. Brad Wall is not going to run. Social Conservatives hope Leslyn Lewis will run. All eyes are apparently on Pierre Poilievre.

Poilievre put a team in place in the last leadership race before deciding not to go for family reasons, but a source pointed out that “people are just as enthusiastic, if not even more, to support him this time around” if he decides to run for leader. “I think the only thing that’s up for debate right now is whether this is going to be a Pierre Poilievre coronation or if it’s actually going to be a real leadership race,” said the source.

Sad news: Kevin O’Leary called up Laura Stone, who is on mat leave, to say “there’s no f*cking way” he’s running this time.