Mulroney wins the PC nomination for York-Simcoe, a riding north of Toronto 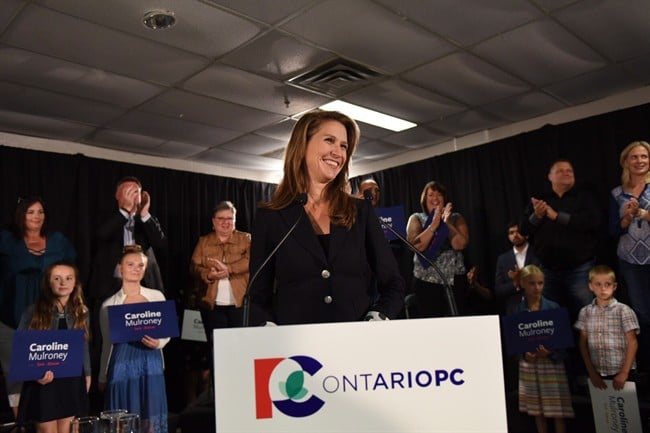 Caroline Mulroney speaks after being named as the Ontario Progressive Conservatives nominee for the riding of York-Simcoe in Toronto on Sunday, Sept. 10, 2017. THE CANADIAN PRESS/HO – Caroline Mulroney Campaign

TORONTO – Caroline Mulroney has been named the Progressive Conservative nominee for the riding of York-Simcoe.

Mulroney, vice-president of an investment firm and daughter of former Prime Minister Brian Mulroney, accepted the nomination at a meeting in the riding on Sunday.

In a speech, she criticized the province’s Liberal government for its controversial minimum wage hike and thanked her parents for teaching her the importance of public service.

York-Simcoe, north of Toronto, has been held by Progressive Conservative Julia Munro since 1995.

Munro has announced that she is retiring, and that she supports Mulroney’s campaign.

“Caroline is a fantastic addition to our modern, inclusive and pragmatic Ontario PC team,” he said in a statement.

“Caroline understands the importance of public service, and I know that she would do a fantastic job filling the shoes of Julia Munro as MPP.”

Mulroney is the vice-president of Toronto-based BloombergSen Investment Partners, and used to work at a venture debt fund. She also co-founded the Shoebox Project for Shelters, which collects and distributes gifts to women who are homeless or at risk.

Ontario’s provincial election will be held in June.