Cars, kids, and cats in the day that was on the campaign trail

Greasing the TPP trade deal, a slightly less-than-capacity campaign crowd, and introducing the Politicats in our recap of the day in #elxn42

The Canadian auto workers’ union, Unifor, warned that the tentative Trans-Pacific Partnership trade deal could cost Canadians in their industry 20,000 jobs. To alleviate those worries, Prime Minister Stephen Harper was in Whitby, Ont., on Tuesday to announce that, if re-elected, his government would invest $1 billion over 10 years (starting in 2017-18) in the Automotive Innovation Fund. Harper’s pledge also comes a day after announcing $4.3 billion in compensation to farmers negatively affected by the TPP deal.

Good news for the auto sector, but for the rest of us?

The subsidies to the auto sector are just as damaging as the tariffs they replace, except the taxpayer pays them rather than the consumer.

With Justin Trudeau now finding himself leading some polls, the Liberal leader took part in a town hall hosted in Toronto by Vice on Monday evening, where he pledged to put an end to boil-water advisories on First Nations reserves within the next five years. The announcement came the same day as the release of his party’s full election platform, which also included an investment of $750 million per year over the next four years for First Nations education.

And, when the formal Q&A was done, Trudeau had loads of selfie requests, which prompted a parting question from Vice.

Trudeau stood in the middle of an empty Olympic Stadium on Tuesday morning in Montreal to explain that his child care plan would help get 60,000 kids in Quebec out of poverty—enough to fill the same stadium that once hosted the Montreal Expos.

Our Canada Child Benefit will lift 60K kids out of poverty in Quebec alone – that's every seat in the Big O! #elxn42 pic.twitter.com/D9hUqxJHgO

The Tories may claim the Canadian economy is looking strong, but that’s not the message coming from the International Monetary Fund. In its World Economic Outlook released on Tuesday, the IMF downgraded its forecast for economic growth in Canada in 2015, by half a percentage point, down to one per cent, besting only Italy and Japan, when compared to G7 countries.

The forecasts for 2016 were also downgraded to 1.7 per cent. Canada’s own projections?

That 1.7% RGDP growth projection by the IMF is scary. Bank of Canada projected 2.3% (e.g. EVERYTHING IS AWESOME!)

Aren’t Stephen, Justin, Thomas and Elizabeth just so cute and cuddly that you just wish you could bring them home with you? Before you answer, we’re not talking about the politicians. We’re referring to four rescued kittens—three male and one female—at the Regina Cat Rescue who’ve been named after the federal party leaders.

The Politicats, as the foursome are dubbed, are each up for adoption, raising money for spay and neuter surgeries. (So far, Justin is already spoken for.) 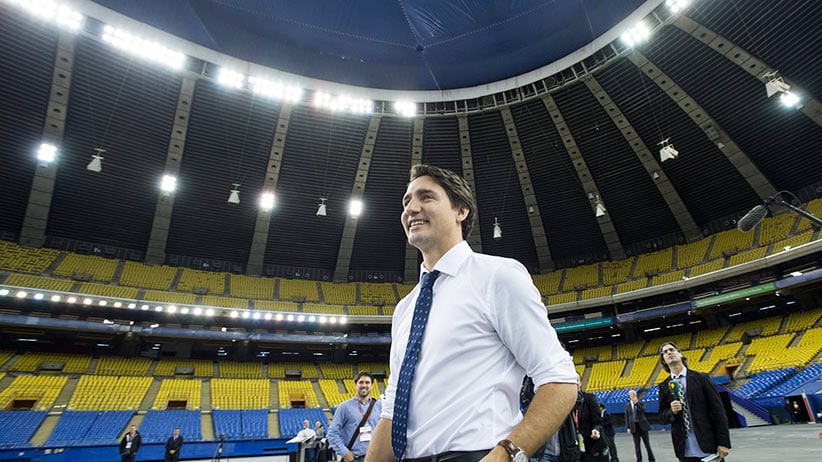 “Thomas is pretty snuggly. Stephen’s a bit reserved. Elizabeth definitely likes to kick things off and have some fun,” said volunteer Rachel Molnar in an interview with the Regina Leader-Post. As for Justin, “He’s a wild card.”

Clarification: An earlier version of this article incorrectly stated the interview with Regina Cat Rescue was from the Star Phoenix newspaper. The interview was picked up from its sister newspaper, the Regina Leader-Post.

FILED UNDER: 2015 federal election Editor's Picks The Day That Was