Changing the future for Canada's conservatives, one dinner at a time 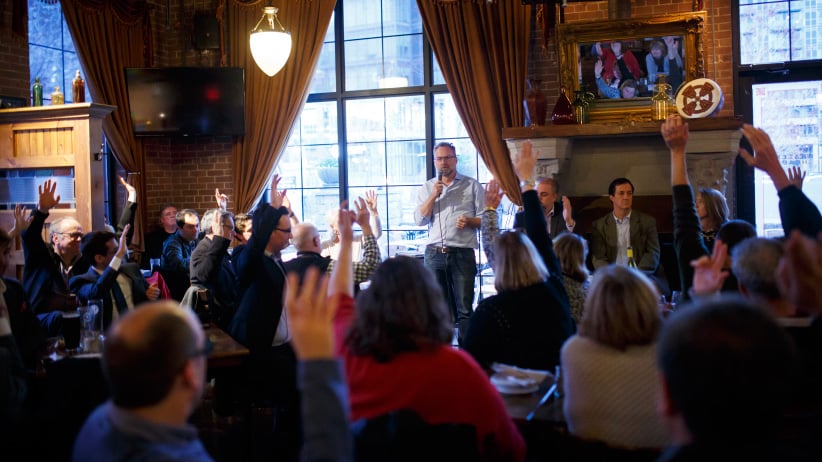 The pub in Toronto was so densely packed that an elbow bump meant a dramatic spill of Guinness. Tiled by tables of four, with narrow columns for navigating, the venue left just enough room to walk the talk of changing who runs the Conservative Party.

As columnist Scott Gilmore hosts dinners across Canada—rolling think tanks on creating a new conservative party, or modernizing the existing one, anyway—the tour seems to be not just for kicks, but rather for real. In a recent Maclean’s column, Gilmore called for a new conservative party and, to start the conversation, offered himself up for mass blind dates with the body politic. While Gilmore admits to potential boondoggling, the 200 strangers who took up his invitation in Toronto produced solid ideas, which they fluidly scrawled on a whiteboard for Gilmore to send to the Conservative leadership candidates. Register a new party, they might not, but attendees at least reported new motivation to vote for one of the candidates who comes closest to their beliefs, and they’re starting a Slack channel for future talk of re-orienting the party. To the extent that a small group of thoughtful, committed citizens can change the world, this grassroots, no-nonsense night holds potential.

RELATED: Confessions of a self-hating Tory

“A lot of people are getting all worked up that I am trying to split the Conservative party,” Gilmore told the crowd. “There’s a lot of people that think this—us getting together—is a bad idea, that it’s going to hurt the party. I think that’s bulls–t.”

Gilmore’s column envisions a fiscally right-wing party that defends LGBTQ rights, welcomes immigrants and nods to the existence of climate change. “Maybe it’s time we considered starting something new: a right-of-centre party that genuinely believes in individual liberty,” he wrote. So come one, come all—Gilmore invited his readers (minus his mother, who he claims hates his work), to unite in their disillusionment, share pints and lay plans. Andrew Coyne of the National Post speaks to the crowd at Scott Gilmore’s New Conservatives Dinner at Brazen Head Pub in Toronto, Ontario on Tuesday, April 25, 2017. (Photograph by Cole Burston)

“You can have conversations about radical ideas when radical ideas are needed,” said journalist Andrew Coyne, who spoke on a panel in the pub. “For all the arrogance and swagger of the Harper government,” he continued, “there is a sense that we can’t possibly talk about what we believe in, that we have to hide our agenda, [that] we have to do things by stealth.” Coyne urged people to own their values and not be ashamed intellectuals, as were many of the Conservative Millennials interviewed by fellow panellist Sarah Boesveld, of Chatelaine.

“What does the Conservative party stand for? I don’t have the first goddamn idea,” offered Matt Gurney, a radio host and the final prepared speaker. He proposed that politicians today should end boutique tax exemptions, stop warehousing white-collar criminals, reinvest in the military, and “don’t be a d-ck.” He was so angry at the candidates in the last election that he spoiled his ballot (Gilmore voted Liberal, he wrote in a 2015 column). 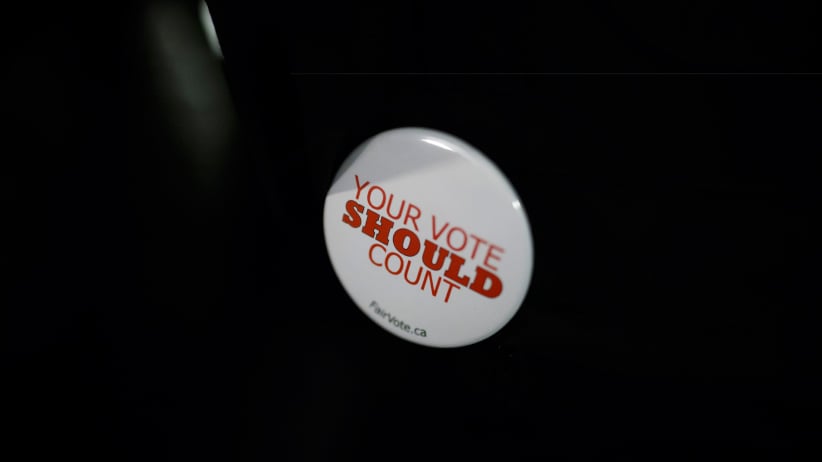 The pin of a guest at Scott Gilmore’s New Conservatives Dinner at Brazen Head Pub in Toronto, Ontario on Tuesday, April 25, 2017. (Photograph by Cole Burston)

Gurney complained that Coyne kept stealing his answers to audience questions, but the panelist telepathy didn’t extend through the crowd, which splintered on whether to create a new party or reorient what they’ve got—with or without social conservatives. A pig farmer took the microphone to say politics must “marry” rural and urban concerns, while another in the audience suggested they start a financial-transparency database like the $10 million initiative by America’s Steven Ballmer, former chief executive of Microsoft. “Good idea,” confirmed Gilmore.

Hypothetically, the crowd could register a new party. They would need to submit an application to Elections Canada with the name of a leader and at least one candidate endorsed in a general election or by-election. They’d also have to find a new name: the “Progressive Conservative Party” is the only Canadian party registered as a trademark.

Conservatives have a tradition of dividing. Offshoots have been the Reconstruction Party, Reform Party, the Canadian Alliance and parts of the Bloc Québécois, and they’ve had progressive prime ministers over time—most notably John Diefenbaker, who supported social insurance and pensions. He also prevented Canada from investing in nuclear weapons, even after John F. Kennedy came to Ottawa to pressure him (Kennedy’s staff left behind a memo in the meeting room, reading “what we want from the Ottawa trip” was “to push” Canada toward the American position.) A man shares his thoughts on a whiteboard at Scott Gilmore’s New Conservatives Dinner at Brazen Head Pub in Toronto, Ontario on Tuesday, April 25, 2017. (Photo by Cole Burston)

What Gilmore wants from his own cross-Canada trip is discussion, and the Toronto crew delivered—if only their Fitbits tracked their jaws. Attendees included a risk consultant for diamond mines and a former provost of Queen’s University; the bartender said of the tips, “They took care of us.” But for each neck wearing pearls, another hung with headphones. There was Odane Finnegan, who is a charity fundraiser and self-described “six-foot-six black guy,” as well as a woman named Casey with tattoos across her feet that symbolize the story of her last week with her dying dog.

“I’m a conservative because I’m an optimist,” Gurney said during the night’s panel. “I think if you leave me alone and leave most people alone, we’ll figure it out. I trust you. I don’t think you’re out to screw me.” The audience agreed with calls of “Hear, hear.” Next to Gurney, Coyne crunched on ice cubes, his brow in a permanent furrow.

Winnipeg is next on the champagne trail, and Gilmore asked what message he should deliver. “Jets suck,” piped up an audience member, and Gilmore replied, “This trip across Canada may be a boondoggle, but it’s not a suicide mission.”

The Toronto mission was supposed to end long before midnight, but stragglers kept debating supply management and objective truth after the waiters had cleared the tables, after all the salt and pepper shakers had been put to bed in a kitchenette. Still under a banner of, “Guinness, est. 1759,” they talked of something new and reluctantly bold, to be established now.

Clarification: This article previously identified Matt Gurney as a Conservative with a capital “C.” He identifies as a non-partisan, small-c conservative.