Terry Glavin: Bernier was going to have to be defenestrated sooner or later. He has now done Scheer the favour of jumping out the window, all by himself. 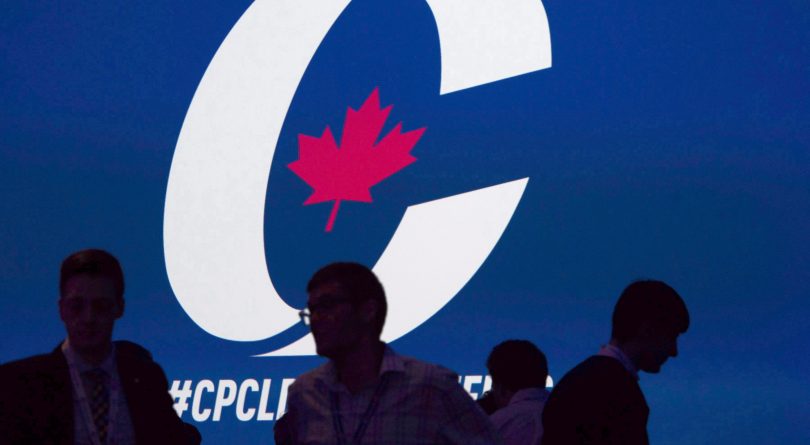 Supporters take their seats during the opening night of the federal Conservative leadership convention in Toronto on Friday, May 26, 2017. A final winner will be picked to lead the Conservative Party of Canada on Saturday night. (Nathan Denette/CP)

It may turn out to be a big fat nothing, of course. Maxime Bernier’s notorious laziness as a parliamentarian may well prove to be a reliable foreshadowing of the inevitable washout that will become of the apprehended libertarian insurrection he has now openly mounted from within Andrew Scheer’s Conservative Party.

It’s also quite conceivable that something rather more than just a fleeting personal vanity project will result from Bernier’s announcement that he is at last breaking away to form a new political party of his own, after having deemed the Conservative Party “too intellectually and morally corrupt to be reformed.”

The whole thing has cast quite a pall over the Conservative policy convention that just kicked off in Halifax, with 3,000 party members expected to attend. Even so, there could be one hell of a silver lining for the Conservatives in all this.

Bernier’s gone-rogue pronouncements about “too much diversity” and “political correctness” are bound to draw defectors from the Conservative Party’s jackass wing. The greater Bernier’s success, the more he’ll be ridding the Tories of a great deal of ballast and riffraff, saving the party the trouble of carrying out the difficult and delicate work of a good old-fashioned purge.

A new right-wing party on the scene with Mad Max as its helmsman, shouting as he does about the Conservatives and their inattention to the perils of “extreme multiculturalism,” would situate Scheer’s Conservatives closer to the Canadian comfort zone—the political centre. Bonus points for the Conservatives: they could boast that they evicted Bernier precisely because of his rude, right-wing bellyaching—and don’t be fooled by his claims that he walked out solely over injuries inflicted upon his cherished principles.

Heading into what already promises to be a long, ludicrous federal election countdown to the big day—on or before Oct. 21, 2019—Justin Trudeau’s Liberals were banking on their ability to jump at every loose remark or gaucherie that might be employed to confirm their caricature of Scheer’s Conservatives as a party riddled with swivel-eyed misogynists, anti-immigrant hooligans, homophobes and Muslim-loathing xenophobes.

It worked for Trudeau against Stephen Harper in 2015. It also left the New Democrats at a loss for ways to out-woke the Liberals. The NDP remains confounded by the predicament, with federal leader Jagmeet Singh engaged in public arguments with Alberta NDP Premier Rachel Notley about pipelines as he makes a bid, only now, to win a seat in the House of Commons in a byelection in Burnaby.

Bernier’s persistent harping about “identity politics” and “having people live among us who reject basic Western values” gifted the Liberals with a fundraising and membership-drive bonanza. And well played, too. The four-term MP for the Quebec riding of Beauce had used the opportunity of his expulsion from the opposition shadow cabinet in June to court donations and pledges of fealty from some of the creepier elements at the Conservative Party’s fringes.

READ MORE: Jen Gerson: Maxime Bernier may be in for a nasty surprise

But with Bernier gone, and especially if his minor but menacing hard-right glee club leaves with him, the Liberals are going to have a far harder time making their “narrative” stick.

It doesn’t reflect a turn to right-wing populism, but recent public opinion polling suggests that Canadians across the spectrum increasingly harbour genuine anxieties about immigration targets, about refugee policy, about what the Liberals mean by “diversity,” exactly, and so on. So far, Bernier’s manifesto comes down to the complaint that Scheer’s Conservatives, in power, would be “just a more moderate version” of Trudeau’s Liberal government. Well, who would outnumber whom here? The Canadian voters recoiling in horror from that prospect, or voters who might rather like the idea?

Bernier could always retreat into his disquisitions on the economic distortions involved in equalization payments between the provinces, but there aren’t many votes in that. His preoccupation with supply-side economics in the dairy industry rests on the unconvincing notion that this is an insurmountable sticking point with the Trump administration in the suspended NAFTA talks. Besides, it comes off like paranoid gobbledygook about the power of the cow lobby, and it certainly isn’t the kind of thing that will split much of the conservative vote.

RELATED: Stephen Maher: Who belongs in the party of Maxime Bernier?

True, Canada’s conservative movement has long served as a proving ground for splittists and wreckers, most notably of the populist variety. Brian Mulroney’s disastrous final years in the Prime Minister’s Office left the old Progressive Conservatives with two MPs in 1993, the rest either losing fair and square or winning by absconding to the Bloc Québécois and the Reform Party. After the Reform Party came the Alliance Party, then the Canadian Reform Conservative Alliance, then the Conservative Party, which didn’t get the upper hand until Stephen Harper’s first minority government in 2006.

While Bernier once enjoyed broad support in the Conservative base, those days are gone, and his recent antic-making has done him far more harm than good. Scheer’s Conservatives are not going to crumble just because Maxime Bernier is devoting himself to making rude, self-aggrandizing noises.

The Conservatives pride themselves in managing their fractiousness by encouraging big-tent, right-of-centre viewpoints to jostle and contend and sort themselves out. After last year’s leadership race, which was strewn with also-rans, Scheer barely squeezed past Bernier, and then he permitted Bernier to get away with being a useless shadow cabinet member until his June demotion.

But it’s another thing altogether to tolerate a habitually unreliable and annoying caucus colleague, a sullen grandstander and a “sore loser,” as Harper describes him. It was clear Bernier was going to have to be defenestrated sooner or later. Bernier has now done Scheer the favour of jumping out the window, all by himself.

Well, not quite all by himself.

Shadow cabinet front-bencher Michelle Rempel’s usually deft handling of the exceedingly combustible citizenship, immigration and refugee file has earned her such standing in caucus that nobody would want to mess with her. Rempel says Bernier never once consulted with her before sounding off about immigration policies that he says will lead to Canada’s “cultural balkanization.”

On Wednesday morning, an exasperated Rempel let Bernier know, in a very public way, that he had to make up his mind, jump or be pushed. “I would also say my colleague has a choice to make—does he want Andrew Scheer to win or does he want Justin Trudeau to win?”

I caught up with Rempel in Halifax by telephone Thursday night. It had been a long and eventful day, and Bernier had made his decision. “It’s never a happy day when you lose a member of the family,” Rempel said. As for Bernier’s declared intention to form up a new party to compete with the Conservatives: “It’s disappointing. The whole situation is disappointing. But really, I don’t know what he’s going to do. All I heard was him calling us a bunch of names.”