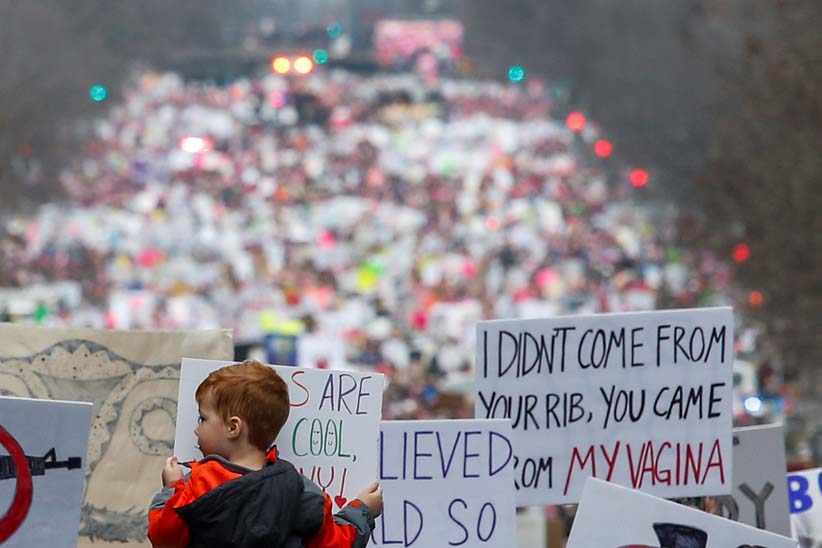 A boy is seen amid placards as he and others head towards a sea of activists taking part in the Women’s March in opposition to the agenda and rhetoric of President Donald Trump in Washington, D.C., U.S. on January 21, 2017. (Adrees Latif/Reuters)

TORONTO – A recent vigil in Toronto to honour victims of the Quebec mosque shooting included the standard rallying cries for unity and impassioned speeches denouncing hate.

It also featured a toddler wailing at the back of the room, a trio of grade-schoolers scooting through the crowd in search of a clear spot to sit side-by-side, and several droopy-eyed youngsters battling sleep on their parents’ laps as bed-time came and went.

Kids seem to have become a regular fixture at the current wave of marches, demonstrations and political protests across the continent — and many parents pledge to make political action an ongoing part of their lives.

“If this isn’t an appropriate place for kids, what is? This is what we’re going to have to deal with in our lives,” 12-year-old Matthew Zoric-Jacobs said following the vigil at a local mosque, where hundreds of neighbours gathered on a Tuesday evening to decry Islamophobia.

His step-sister Sumayya Iman Malik said she, too, felt compelled to do her part.

“I’m in this community and if this is how I’m feeling I want to stand up for my rights,” said the 12-year-old.

It’s easy to get down by watching the news, added Malik, a Muslim girl who said anti-Islamic rhetoric has made her “feel really sad.” But participating in these events “makes me feel like I’m part of a change,” she added.

And there seems to be no shortage of events to take part in, especially in the United States where an order banning travellers from seven majority-Muslim countries has stoked even more anger against President Donald Trump.

In Toronto, hundreds of protesters chanted outside the shuttered U.S. Consulate to protest Trump’s executive order on immigration last month, while thousands turned up for the Women’s March the weekend before.

Lesley Wood, an expert in social movements at York University, said this surge in spontaneous political action is partly spurred by online media, which offers the double whammy of both promoting and creating social pressure to take part in big protests.

“When you get that sort of level of mobilization, you’re going to get people who are less the regular suspects. So it feels safer, it feels urgent, it feels like it’s more normalized,” said Wood, adding that the speed at which protests can be organized also leaves little time to arrange child care.

“You’re going to be more likely to see people who don’t normally protest, including people bringing their children.” 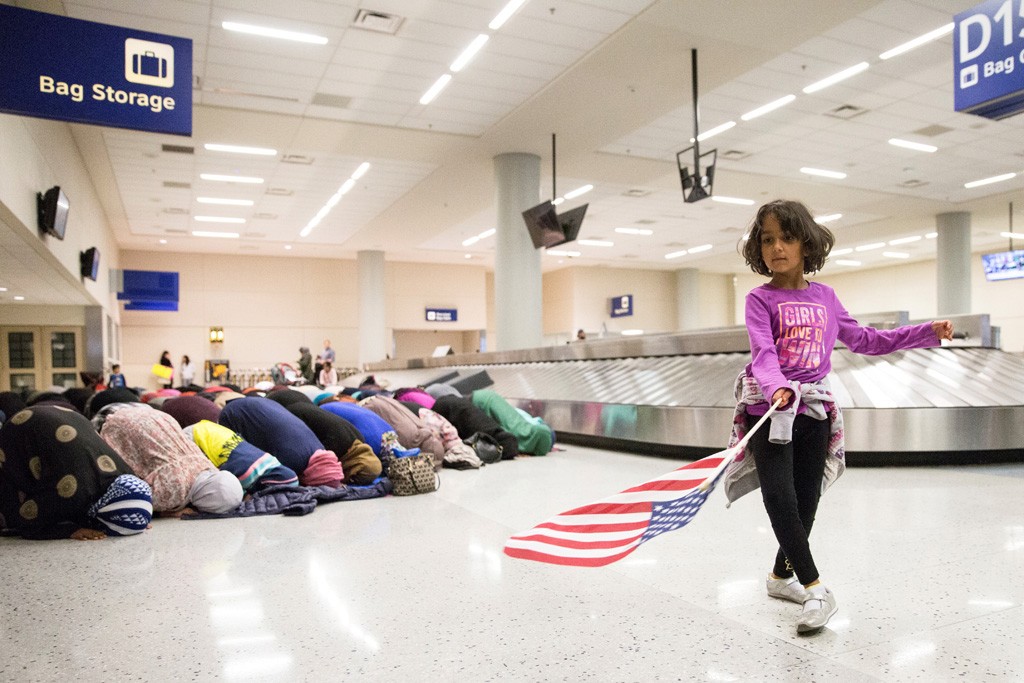 In Toronto, that includes 54-year-old Phil Rees, who said he attended his first political demonstration, about climate change, a few years ago but is unsure whether the tactic actually had an impact. He turned up at last week’s vigil and the Women’s March before that with his 12-year-old daughter, mostly drawn by the hope such events will offer her a sense of empowerment.

“I hemmed and hawed for a long time about the value of demonstrations and marches and things like that and I thought it really was time for me to try it out personally,” said Rees, who runs a small spray foam insulation business.

“What I’m learning so far is that it seems to be a good thing to be out and about with other people who feel similarly and want to express that. So I think it’s a good thing for my daughter to be in involved in group activities like that.”

Wood, a sociology professor, said family participation does send a big message to politicians: average Canadians are outraged, not just the radical fringe. And that, in turn, can draw even more families to join in protest.

“On some level it means that you care. And if you care, you protest,” she said.

Whether children are able to grasp the issue at hand depends on various things, including the age and interest of the child, added Wood, who started bringing her 12-year-old to protests when he was just eight weeks old.

If your child is bored and clearly not interested, it’s time to leave the gathering, she advised.

After an hour of speeches at the Toronto vigil, nine-year-old Yaseen Malik said he understood the issues — but nevertheless failed to recount what was said.

Still, his mother Sarah Latha said she wouldn’t think of attending a protest without Matthew, Sumayya and Yaseen.

“Being politically involved is a part of who I am. It’s a part of who the children are too, through me,” said the 38-year-old, whose South African-born mother introduced her to the anti-apartheid struggle as a child.

“I know that sometimes people are critical of adults and parents who expose their children to politics but in our home it has been a part of instilling in them a sense of empowerment and hope. That they don’t need to feel helpless.”

She said social media has made this more of an imperative.

“They’re exposed to stuff before I am even exposed to it so I don’t have a choice anymore. And I think for me it’s been about equipping them to navigate just how complex the world is.”