'Lock her up' chant is heard during Chris Alexander's speech

The Conservative leadership hopeful says he didn't approve, but didn't try to stop the crowd from referring to Alberta Premier Rachel Notley in this way 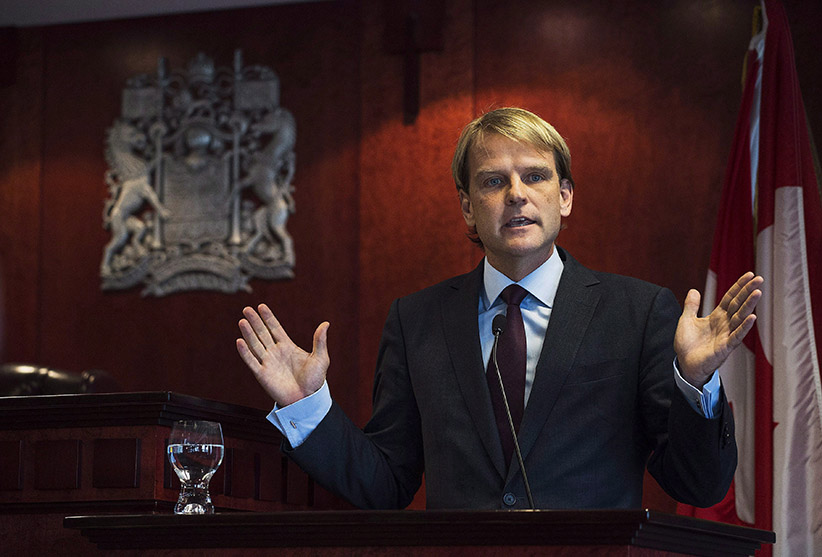 Federal Conservative leadership hopeful Chris Alexander says he didn’t stop a crowd calling for Alberta Premier Rachel Notley to be locked up because politicians need to listen to constituents.

The former immigration minister was speaking at a rally against the provincial NDPs’ planned carbon tax Saturday when protesters began the “Lock her up” chant popularized during president-elect Donald Trump’s campaign.

The Edmonton rally was organized by Rebel Media, an online news and right-wing opinion outlet, and video of the incident was posted on Twitter by the website’s Alberta bureau chief Sheila Gunn Reid.

The video shows the ralliers start by chanting “Vote her out,” but as they grow louder, the message changes.

As they chant “Lock her up,” Alexander smiles and appears to gesture in time with the chant, nodding along.

Someone can be heard shouting, “That’s enough! That’s enough!” in the background, and as Alexander smiles and nods, the camera turns to face the crowd.

At no point in the video does Alexander stop the protesters or say anything about their chant.

“You don’t pick it up in the video, but I started to say the words in time with them, ‘Vote her out,’ and then the next point I made was about the ballot box,” he said. “I expressed my disapproval by talking about something completely different: voting. I think that was pretty clear.”

He said he thinks the chants came from a place of pain.

“Alberta’s hurting. Unemployment there is at nine per cent; that’s the highest in 22 years,” he said, adding that many of the people in the crowd had lost their jobs.

The province is introducing a broad-based carbon tax on gasoline at the pumps and home and business heating bills, starting on Jan. 1, which Alexander says will just make things harder for people who are already struggling, though the NDP say it’s an important part of lowering carbon emissions.

Representatives for Notley declined to comment on the incident.