Christine Elliott and the Pips

Paul Wells: The other candidates in Wednesday’s PC leadership debate spent much time focused on Elliott. Like backup singers to a possible premier. 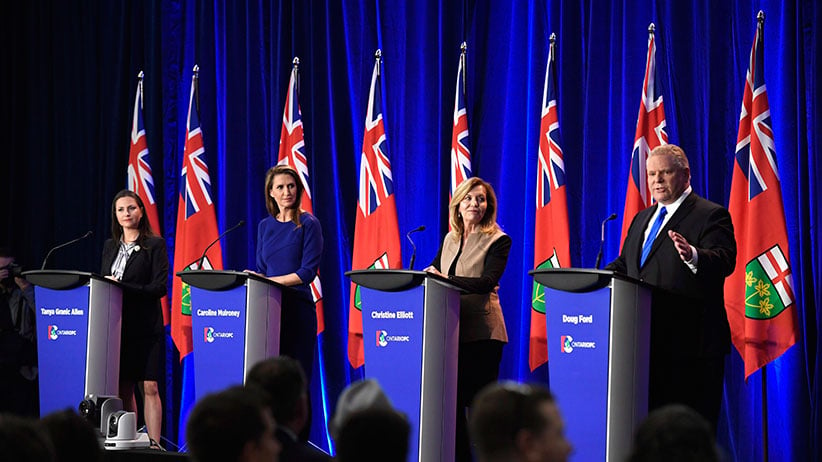 The Ontario PC leadership race started from scandal in late January and will end, one devoutly hopes, as scheduled on March 10. Conceiving, organizing and executing a full campaign, with two debates and a complicated voting process designed to guard against, ahem, impropriety has taxed the organizing chops of a hard-working provincial party executive who must wish none of this ordeal had been visited upon them.

Who this process will spit up as Upper Canada Toryism’s standard-bearer for a provincial election that will follow only three months later is anyone’s guess. It’s not like there’s a precedent for any of this.

If I’m left, in the absence of craft or science, to fall back on folksy rules of thumb to guess the frontrunner in this race, then, I guess I’ll point out that just about every other candidate in Wednesday’s Ottawa debate spent a good deal of time hurling accusations at Christine Elliott.

It’s almost like they’ve decided they need to worry about her.

I carry no water for Elliott, whom I believe I haven’t met and who is running for the leadership for the third time after coming in third to Tim Hudak and another guy in 2009, and second to Patrick Brown in 2015. This is, on the face of it, not the sort of record that would cause an observer to spontaneously burst into hoots of enthusiasm. And Elliott’s cautious, detail-free performance in the first leaders’ debate two weeks ago in Toronto did not do more to distinguish her as the likeliest winner.

But she sure seems to get under the other candidates’ skin.

“Where were you when Patrick Brown was trampling on the grassroots through our policy process?” Tanya Granic Allen, the candidate of resentment against the disgraced former leader, asked Elliott.

Elliott, who’s been Ontario’s “patient ombudsman” for two years, insisted she was selected by a non-partisan advisory panel and that the phone call from the province’s Liberal health minister only formalized the offer. Ford was unimpressed. “Insider,” he snarled.

Elliott stood out not merely because the other candidates made her dance but because she was pretty nimble in drawing her own distinctions with them on selected issues.

At one point Granic Allen, a Christian conservative who opposes Wynne’s elementary school curriculum and any trace of any environmental policy of any kind, declared she’d not merely stop the spread of wind turbines in Ontario, she’d physically remove the ones in place now. “I’m going to take those wind turbines and I’m gonna rip ‘em right out of the ground,” she said.

It fell to Elliott to explain the fine points of contract law, such as the fact that it exists. “There are a lot of people who’ve negotiated their own contracts,” she said. “We have to find ways if we can try and terminate them early.”

Granic Allen was unpersuaded. She is like the person who sits in the front row from the first day of school to the last and is unpersuaded by anything that might get said in between. “We can pay out,” she said of the wind-turbine people. “We can pay them, fine, we’ll pay them to the end of their contracts.”

Elliott persisted. “If that’s what you say, nobody will come to Ontario.”

By the standards of this race, it was an unusually pointed and clarifying exchange. Elliott came off as cooler and more informed by the demands of the real world than her opponent. Frankly, that’s not necessarily a good thing. Grassroots leadership campaigns depend more often on motivating rage than on the fine points of policy. And especially given the chaotic genesis of this race, anyone can win it.

But the exchange with Granic Allen was one of a small number of moments when the central claim of Elliott’s candidacy—that she’s a grown-up who’s served in the Ontario legislature and dealt in sophisticated ways with the realities of power—seemed both true and interesting.

In some ways, all of the candidates had a good night. Caroline Mulroney is pretty clearly her mother Mila’s daughter, soft-spoken and non-confrontational and without a hint of the Brian Mulroney blarney. But she was more specific on her policies than before, and a couple of times she allowed a glimpse of an agreeably dark sense of humour. Ford was Ford, blunt and cheerful. Granic Allen has probably already succeeded in establishing herself as a standard-bearer among social conservatives in the province.

In other ways they all had a predictably awful night. Nothing any of them said adds up as a governing plan for the province. By and large they all oppose a carbon tax that would be a lucrative source of government revenue, even as they wish the Liberals would reduce the debt—and even though most sketched vague but unmistakably ambitious plans for improving health-care delivery in the province’s rural areas.

Taking in fewer revenues while increasing spending and driving debt down would indeed be a hell of a trick, but the lot of them were short on explanations for how they’d do it. Ford was pretty sure health-care costs would plummet if only somebody would “listen to the nurses.” Most of the night operated at about that level of generality.

Probably one of them will be the next premier. The momentum of the Wynne Liberals’ unpopularity will be nearly impossible to brake. Elliott seemed, at crucial moments, like the only one who’s familiar with the tasks normally carried out by a premier. Which helps explain why her opponents so frequently turned toward her, gestured at her, echoed or anticipated or rebutted her spotlight moments. Like backup singers. However this ends, she can tell herself she had one good night amid the chaos.