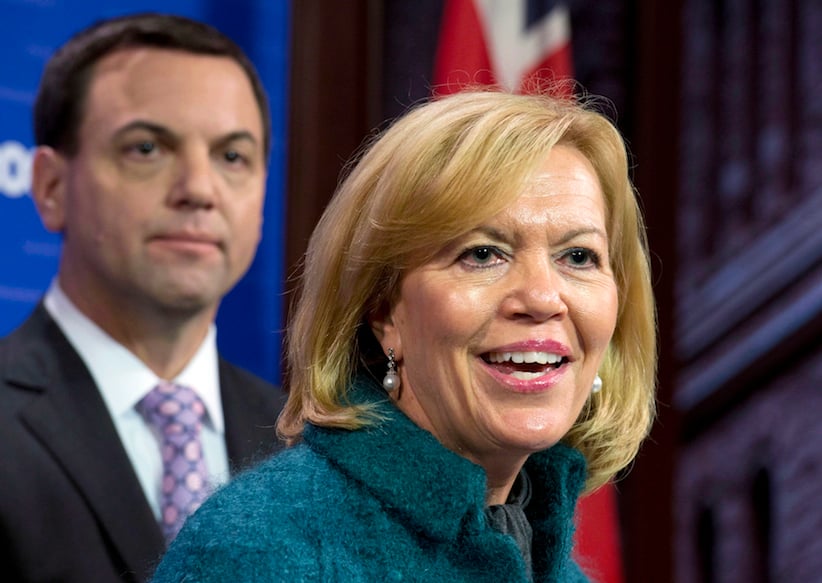 TORONTO – Christine Elliot, the deputy leader of the Ontario Progressive Conservatives, resigned as a member of the provincial legislature Friday, three months after losing her second bid for the party’s top job.

The MPP for Whitby-Oshawa, who has not been seen around the legislature since losing the leadership race to former Barrie MP Patrick Brown last May, said in a brief statement that her decision to step down was not easy.

“While I put my name forward to lead our party, party members made a different choice,” she said. “I fully respect our members’ decision, and I wish my colleagues and the party every success in the future.”

Brown quickly put out a statement thanking Elliott for her public service.

“Christine has been a tireless advocate for her constituents and Ontario, and an esteemed member of our caucus,” he said. “We appreciate her well wishes and in turn wish her the best as she embarks on this next chapter of her life.”

Elliott “could be the fiercest of adversaries in debates” and “left her mark on Ontario’s political landscape,” said Premier Kathleen Wynne.

“She was passionate, but never personal,” said Wynne. “Her regard for Queen’s Park and its elected members made her one of the most respected MPPs in the house.”

The mother of triplet boys, now in their mid-20s, entered politics when she won a seat in Whitby, east of Toronto, in a 2006 byelection, replacing her husband after he moved to federal politics.

Elliott placed third in the PC’s 2009 leadership contest, which was won by Tim Hudak, who resigned shortly after last year’s election loss to the Liberals.

Hudak’s resignation triggered a lengthy leadership contest that ended up as a head-to-head showdown between Elliott, the establishment candidate supported by most of the PC caucus and party heavyweights like former premier Bill Davis, and Brown, a young federal backbencher with virtually no provincial profile.

She was openly critical of the once mighty Progressive Conservatives during her leadership campaign, saying the party had become a “toxic brand,” especially with young people and women.

Like Brown, Elliott vowed to rebuild the party from the ground up, but in the end Tory members went with a fresh face who had helped the federal Conservatives make big inroads with many ethnic communities in the vote-rich suburbs around Toronto.

Elliott, who had also served as the Tory health critic, said she would stay active in her community helping people with disabilities.

“I entered public life in 2006 to advocate for the rights of vulnerable people and their families,” she said. “Although my role will change, I remain committed to advocating for a fully inclusive Ontario where all people can live lives of purpose and dignity.”

Elliott grew up in Whitby and graduated from the University of Western Ontario, where she also got her law degree, and later co-founded her law firm with Flaherty.

Wynne has up to six months to call a byelection to replace Elliott.

Brown, meanwhile, is running in a byelection next Thursday in Simcoe North in an attempt to get a seat in the Ontario legislature after resigning as the MP for the neighbouring riding of Barrie when he became party leader.