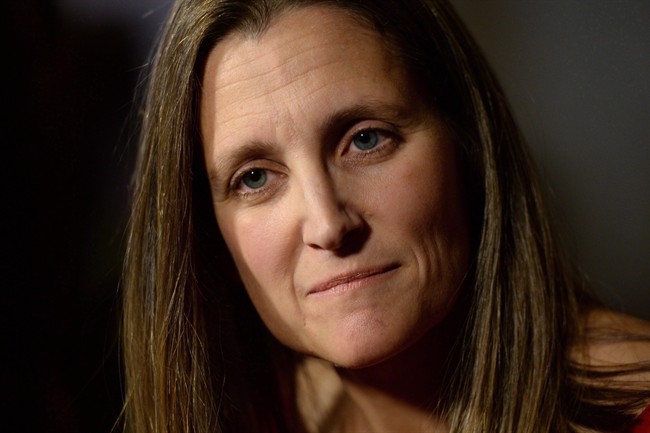 Enormous opportunity exists for Canada amid growing protectionist and nationalist movements in the United States and elsewhere, Freeland told an international-relations group Thursday.

She believes Canada is bucking the trend in the face of populist movements seeking easy targets such as immigrants and trade agreements.

The country’s open and trade-friendly environment, she added, will translate into unique opportunities ahead despite forecasts of soft economic growth.

“And yes, I do think that represents very significant and distinctive opportunities for our country in 2017.”

Freeland told the nearly 300 in attendance she has high hopes for the Canada-EU Comprehensive Economic and Trade Agreement (CETA), which is expected to be ratified this year.

Canada is a trading nation, Freeland said, and there is strong public and cross-party support for international trade agreements that places the country in a unique situation compared to others.

But it won’t be an easy year, she added.

“I do think that, of course 2017 is already set to be a complicated year for all countries that are connected to the global economy, and that is very much true for Canada,” Freeland said.

The ongoing softwood lumber dispute with the United States and a vow by president-elect Donald Trump to renegotiate the North American Free Trade Agreement loom large on a packed horizon.

But she said CEOs and investors have expressed support for Canada as Trump’s apparent pro-U.S. policies begin to take shape.

Freeland said it will be up to the Canadian government to remind the new U.S. administration the relationship between the two countries is balanced and one of the most productive in the world.

“The Canadian and American economies have a very close relationship, it’s not possible to separate the two,” she said.

On the softwood lumber front, she would only say that talks are ongoing.

The dispute reignited late last year when U.S. lumber producers petitioned the American government to impose duties on Canadian softwood lumber, saying it was being sold for less than fair value in the United States.

Freeland noted that negotiations on the matter have been “historically difficult.”

Quebec Forestry Minister Luc Blanchette, who attended the event, reminded the federal government the industry provides 60,000 jobs in 220 municipalities in the province.