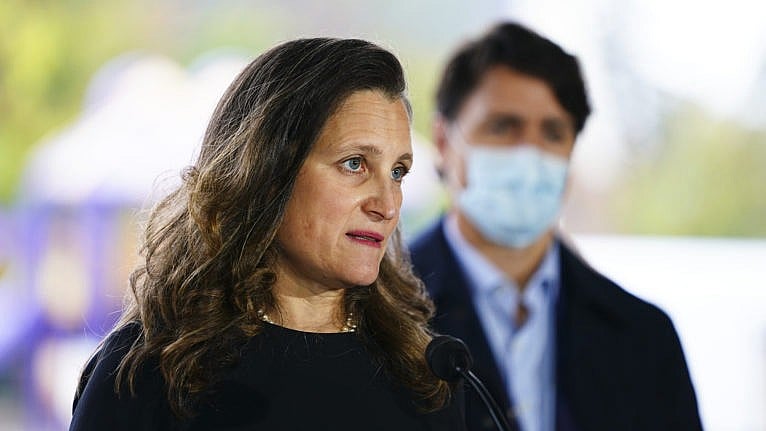 At an estimated cost of over $111-billion, the CEWS has been the largest by far of Ottawa’s more than $289-billion in direct support measures announced during the pandemic. Speaking at a news conference with Prime Minister Justin Trudeau, Ms. Freeland announced what she said will hopefully be the “final pivot” in terms of direct income support programs. “The existing income and business support programs will end on October 23rd as previously announced. We are moving from the very broad-based support that was appropriate at the height of our lockdowns, to more targeted measures that will provide help, where it is needed, while prudently managing government finances,” she said. Thursday’s announcement includes two new programs: one is a wage and rent support program aimed at the tourism sector called the Tourism and Hospitality Recovery Program. The Minister said this would apply to hotels, restaurants and travel agencies that are still facing public health restrictions.

Trudeau’s passport pass: On Thursday, Justin Trudeau announced there will be no federal vaccine passport for international travel. Instead, a national proof of vaccination system will be offloaded onto the provinces. Provincial proofs of vaccine will show your name, date of birth, and COVID-19 vaccine history—including which doses you got, and when you got them.

“I’m happy to confirm that all provinces and territories have confirmed that they will be moving forward with a standardized national proof of vaccination,” Trudeau said. Fingers crossed other countries approve. The Globe reports:

He said the documentation is already available in all three territories, as well as Saskatchewan, Ontario, Quebec, Nova Scotia and Newfoundland and Labrador. The federal government is picking up the tab so all provinces can make the change.

“We made a commitment to ensure that there is a national standard for a proof of vaccination certificate,” he said. “So that people can travel domestically but particularly internationally.” He did not directly answer a question about whether other countries have confirmed they will accept the new vaccine documentation for travel. But he said he is “very confident” it will be accepted worldwide. Canadians can still use their previous provincial documentation for travel until their province issues the new standardized version.

It’s the vaccines, Tories: As Conservatives ponder the election just past, writes Andrew MacDougall in Maclean’s, they ought to think a little harder about the role that vaccination played in preventing electoral advances. MacDougall, former director of communications to Stephen Harper, says the party was “offside with 80 per cent of Canadians’ views on vaccinations,” and is still offside, as the dispute over vaccinations on the Hill demonstrates.

Doing things like objecting to the “secretive” Board of Internal Economy dictating the House of Commons’ position on vaccine mandates for Parliament, as the Conservatives did this week, is to both score a point and miss it completely. Yes, it should have been a vote in the full House of Commons, but that’s not really the objection here, is it? The full vote will come soon enough and then the problem will be laid bare for all to see. But don’t Canadians who have reservations about vaccines deserve a voice in the House of Commons? Sure, but there’s no reason that voice can’t belong to someone who is fully vaccinated. We already know the vaccine-resistant and hesitant aren’t responding to the government’s entreaties; watching the Conservatives duck the conversation gives them extra cover. They probably won’t listen to anyone, but surely it’s better to say you’ve tried, especially when the vast majority of Canadians are watching and wondering where you stand.

Farisa Navab, 20, died on Sept. 11 from a rare autoimmune disease.  On Tuesday, images of Navab and 10 other people appeared on the social media of Randy Hillier, an Independent MPP for Lanark-Frontenac-Kingston. The posts suggested they died or suffered from a “permanent adverse reaction shortly after receiving their first or second dose of the COVID-19 vaccine.” “It’s straight up lies,” said Ammarah Navab, noting her sister died of a genetic disorder. “It’s complete fake news.”

Equalization to stay: Justin Trudeau does not intend to obey the results of an Alberta referendum that calls for the end of the federal equalization program, he said Tuesday, CTV reports.

“To eliminate equalization, which is what’s proposed in Jason Kenney’s referendum, is something that cannot be done by the federal government,” Justin Trudeau said Thursday. “It needs to be done by the federal government working with seven provinces or territories representing over 50 per cent of the Canadian population.” The final results were expected to be released Oct. 26, but partial results released by some municipalities showed about 60 per cent of Albertans who voted agreed with [Jason] Kenney.

Foreigners to blame: An inquiry launched by Jason Kenney has found that foreign donors provided nearly $1.3 billion in funds for Canadian environmental campaigns between 2003 and 2019, the National Post reports.

The report, compiled over two years by Calgary accountant Steve Allan, fulfils a major election promise for Kenney’s United Conservative Party and lays out the network of environmental organizations, and some of their funding sources, that have sought to limit the growth — or shut down entirely — Alberta’s oil and gas sector.

“From my perspective, I was surprised at how much we found, how co-ordinated and sophisticated and well-funded these campaigns were,” said Alberta Energy Minister Sonya Savage in an interview. “It was a lot of money, coming from across the border, from foreign jurisdictions that came in to influence domestic policy, to influence legislation and regulatory matters, policy, and we should care about that.”

CMA calls out Moe: The president of the Canadian Medical Association says “it is time to stop asking nicely” for Saskatchewan to fight the fourth wave of COVID-19, CBC reports.

Dr. Katharine Smart issued a statement Thursday, one day after Saskatchewan’s chief medical health officer, Dr. Saqib Shahab, broke down while presenting dire new modelling on the province’s COVID-19 situation. That modelling suggests the number of Saskatchewan residents infected with COVID-19 and placed under intensive care could more than double by the new year if no additional public health measures are brought in — and if people don’t change their behaviours in the next few weeks.

Bad idea, Horgan: Vaughan Palmer, writing in the Vancouver Sun, advises the provincial government, which is changing the access to information law to “feed the entire bill into one of their shredders.”

Maclean’s live! Join Paul Wells next Thursday at the NAC in Ottawa when he sits down with Anne McLellan and Lisa Raitt, who will be fresh from co-chairing their two-day summit, Coalition for a Better Future. If you’d like to attend in person (proof of vaccination required) register here. Tickets are free but limited!