Cleaning up the splatter in Alberta 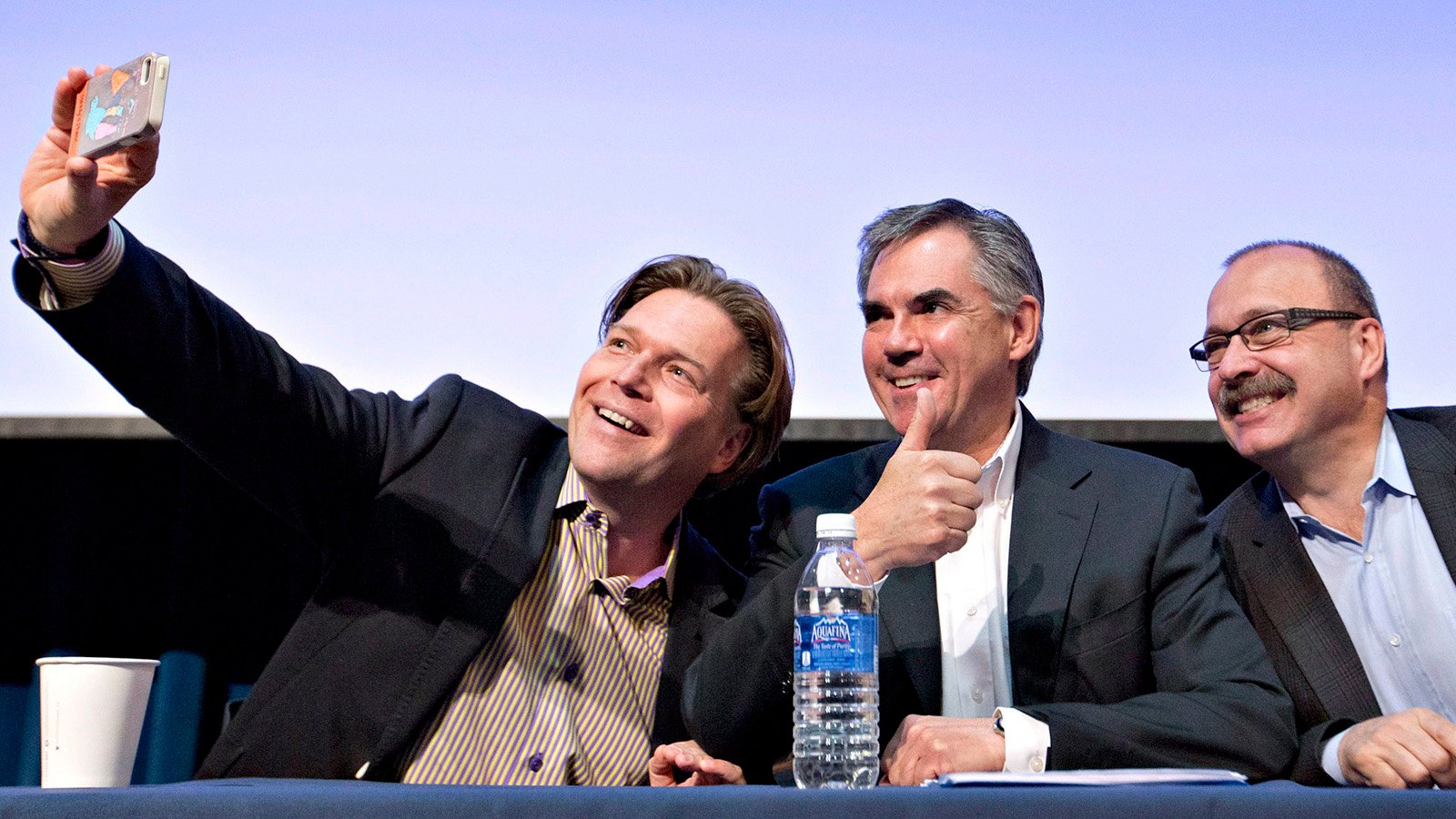 The fireworks that accompanied last week’s special report by Alberta Auditor-General Merwan Saher were, at first blush, a little mysterious. The A-G’s report into disgraced premier Alison Redford’s bizarre use of government aircraft had already been partially leaked, and did not contain much that had not already been reported. But it was greeted with remarkable excitement—broken down, line by line, on social media as if someone were tweeting the Dead Sea Scrolls.

Even a political commentator born in Social Credit Alberta needed a little time to realize why. It wasn’t that Redford and her daughter had been allowed to treat Alberta government aircraft like theme-park rides. It wasn’t that the premier had tried to build a secret downtown crash pad in a government building in the capital. It was that an independent officer of the Alberta legislature was pointing it all out, harshly, in plain English, with no fudge.

Such characters—departmental ombudsmen, freedom-of-information (FOI) commissioners, and the like—have usually been very tame creatures in Alberta, often doing more to make scandals disappear than they do to rectify them. (The Edmonton Journal observed in July that over the past 20 years, two-thirds of Alberta FOI requests for provincial records yielded no documents whatsoever.)

Redford had actually asked for Saher’s investigation. She probably expected him to emphasize that the written policy on use of provincial airplanes is vague, that it allows for plenty of discretion, and that it is backed up by little oversight. All of which is true (and in the report). It did not get her off the hook.

Last year, when the Opposition asked ethics commissioner Neil Wilkinson to investigate Redford’s role in choosing her ex-husband’s law firm to handle a lucrative lawsuit against tobacco companies, the result was more typical of Alberta. Wilkinson absolved Redford on technical points—there is no conflict of interest when you hand a huge contract to your ex-husband, who is still part of your political inner circle, because, hey, Alberta’s a pretty small world and we all have to get along. His report also harrumphed about how “a person’s reputation . . . should not be rashly impugned” and how an ethics commissioner’s “sworn duty is . . . to ignore partisan hyperbole.”

One implication of his ruling was that Redford had lied to the Legislative Assembly about not being involved in picking a firm, which violated what is supposed to be ethics Rule 1 for a minister of the Crown. But that issue was carefully, indeed, explicitly, overlooked by the commissioner. That is business as usual in Alberta. Saher’s view of his job—apparently, he believes it involves something other than writing defences for dubious conduct—is less familiar.

When Redford was made Progressive Conservative leader, the province was widely congratulated on its progress. From that point of view, her downfall is almost certainly more significant. Alberta has now had the first political scandal, or set of scandals, of a type that is almost proverbially typical of British Columbia. It is not that there are no precedents; the precedents just didn’t sprout into scandal before. The machine that has run the province for 43 years, the network of personal loyalties and institutional connections that has always suppressed any signs of wobble in the works, is showing wear.

PC premiers have been disposed of before when they became inconvenient to electioneering, but the party may not have the smooth transition to a new regime that it so strongly desires. The opponents of leadership frontrunner and party-elite favourite Jim Prentice, for instance, seem increasingly less content with putting on a good show and taking a prominent place in cabinet when the jousting is over.

The party had planned a leadership campaign without televised debates, but candidates Ric McIver and Thomas Lukaszuk held an extraordinary joint press conference on Aug. 11, announcing that they had co-signed a request for at least one TV debate with Prentice. Party president Jim McCormick gave them the brush-off, noting that “the three candidates have been in the same room in front of our members and the general public plenty of times this campaign.”

Meanwhile, at almost the same moment, the Prentice campaign was caught on audiotape by a McIver worker offering PC membership cards for free at a festival in Calgary’s Chinatown—a practice that is not unlawful, but that “the [party] does not condone,” according to a spokesman, because it savours of vote-buying.

As Lukaszuk and McIver grow less tolerant of the quickie coronation planned for Prentice, ripples from Redford’s problems are splashing onto the pants of Finance Minister Doug Horner, whose department is in charge of the fleet of aircraft she abused. By law, all requests for Alberta Air Transportation Services flights are “subject to approval” by the finance minister. According to Saher, it was Horner’s staff who made fictional block bookings to guarantee that others on official business couldn’t board the plane with Redford and dizzy her with their proletarian stench.

Moreover, when challenged in the Assembly on a flight that had carried Redford to Grande Prairie, Alta., solely for a party fundraiser, Horner claimed that the premier had coincidental government business there. The flight is condemned in Saher’s report: “We reviewed Premier Redford’s schedule for that day and did not identify any government business scheduled in Grande Prairie.”

On Aug. 9, after the auditor-general’s report was formally issued, Horner sent an email to political colleagues acknowledging that “it has been a very difficult few days” and that “some of you think I should step down because of this and some of the other difficult files that I have had the privilege to manage over the last two years.” His answer: to heck with that. In the email, Horner argues that authorized users of the airplanes “do not get ‘approval’ from my office,” but denies being ignorant of how the planes were being used, and then again says he did not “mislead Albertans” about their use.

“I do fear the loss of the respect of colleagues and supporters because of the misleading spin that is being attempted here,” he concludes. “So, to those who believe I should resign over this, the answer is no. I look forward to continuing to work toward getting Jim [Prentice] elected as our new leader and premier.” The email does not address the topic of the block bookings by Treasury Board employees.

Readers who vaguely remember the name “Horner” will understand what a problem this might present for Prentice if he coasts successfully into the premiership in September. The finance minister is the son of Hugh Horner, one of the paramount founders of the Alberta PC dynasty, and nephew to three other ex-MPs. He is also the author of the cryptic, illogical Redford budgets that invited condemnation from the C.D. Howe Institute, a chorus of former Alberta finance ministers and, yes, that troublemaking auditor-general.

A premier who invites Horner into cabinet would re-energize the party’s Redford issue on Day 1. A premier who doesn’t may have to fight the 2015 election without an important asset north of the capital. Lukaszuk, in yet another uncharacteristic breach of party bonhomie, told the CBC he doesn’t care whether Horner resigns now. “If I am so lucky as to be the premier, you are going to see a major housecleaning at the top, without a doubt, and the cabinet will look significantly different.”

This kind of rough intra-party play is new for Alberta, although conditions were somewhat similar in 1993, when new PC leader Ralph Klein had a showdown with his caucus over gold-plated MLA pensions. The PCs have consciously, and successfully, made themselves a device for managing the province’s resource wealth for the benefit of the middle, professional and working classes. Leftism no longer fights exclusively for industrial workers, but, by the old standards of Marx and Lenin, Alberta ought to be a dream come true.

For a generation, tradesmen and even unskilled workers have it as good here as they have ever had it anywhere on Earth. And, as the economy attracts more tradesmen, their political power becomes greater. (Which is why the feds’ Temporary Foreign Worker program is so popular here: It guarantees that the historic industrial “working class,” which faces market competition solely from Canadians who have training and formal certification, has continued access to cheap cleaning, cooking and domestic care.)

Alberta’s privileged classes thus have a sort of unspoken deal with the PCs, and it is this deal the PCs are counting on as they try to hustle Prentice to the podium in September. But the 2011 election results and the current polls show Albertans wondering whether Danielle Smith’s Wildrose Party could not manage things at least as competently as Ed Stelmach or as ethically as Alison Redford. The province’s labour markets remain tight, and oil prices are buoyant, but the treasury is borrowing. Young liberal urbanites who were stampeded into voting PC in 2011 will not be so easy to terrorize a second time.

In short, Alberta politics have never been more interesting. Yet it is worth remembering that both Stelmach and Redford won enormous election victories, and that the PCs have survived in power through a 150 per cent increase in the province’s population. Four decades’ work is not undone overnight.