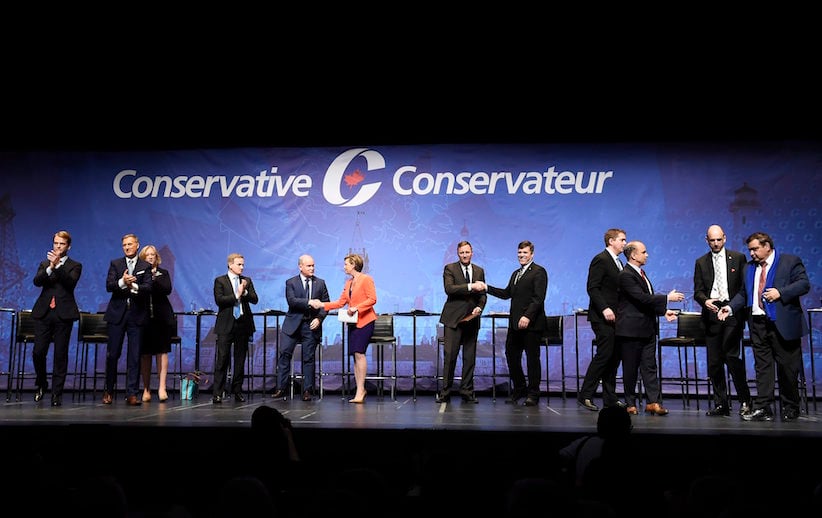 OTTAWA – The Conservative leadership race now enters the final weeks with penultimate debate showcasing the task at hand for the majority of candidates: take down clear front-runner Maxime Bernier.

Wednesday night’s final party debate in Toronto was supposed to be a big political spectacle in its own right, with the May 27 climax looming on the calendar.

But then celebrity businessman and front-runner Kevin O’Leary went and quit the race just hours before, a development that some party members seemed to welcome; when the debate moderator announced he wouldn’t be on stage, sustained applause broke out.

O’Leary threw his support behind Bernier, his closest rival in the contest. The Quebec MP is known for his libertarian bent and self-proclaimed “Mad Max” nickname. His competitors seized on both as they turned on him fast.

Michael Chong called his policies “extreme,” highlighting Bernier’s pledge to cut the size of federal programs by a third.

“Mr. Harper only cut six and a half per cent,” Chong said. “That will hand the next government to the Liberal party of Canada.”

What’s necessary to beat Trudeau was a point of contention during the event, with candidates also pivoting to attack Kellie Leitch and her proposals on face-to-face interviews for all immigrants and tests for Canadian values.

OPINION: Farewell to Kevin O’Leary, a man who didn’t come back for you

Lisa Raitt, an MP from a Toronto-area riding, said giving the suggestion the party is not inclusive is a direct way to lose all the seats the party has in that area.

“While it may sound wonderful, and you may think you are dealing with security issues, all you’re doing is labelling me, as a Conservative from Ontario, somebody who is intolerant and I will not stand for that,” she said.

But everyone mostly saved their fire for Bernier, the pile-on heaviest over the MP’s bedrock pledge of abolishing supply management, an issue that’s leapt into the national spotlight anew after catching the attention of U.S. President Donald Trump who has said he wants it gone too.

With supply management key to the livelihoods on many farmers, the other 12 candidates are in favour of it, and leapt on Bernier for seeming to side with Trump.

“You don’t start off negotiations by unilaterally surrendering an entire section of our economy,” said Andrew Scheer.

But Bernier said he doesn’t understand why his competitors are so in favour of a program that raises prices for so many Canadians.

“It is a little bit bizarre that I am the only one who promotes more freedom and all the other candidates want to promote a policy that was brought in by Pierre Elliot Trudeau?,” he said.

Bernier only learned of O’Leary’s endorsement in a call during the wee hours of Wednesday morning, and his voice was hoarse as he stumbled over his words to convince voters to come onside.

“It is important to do the big, the bold reform at the federal level, don’t be scared about that,” he said.

The party says 259,010 people are eligible to vote for the next leader and the winner will be declared May 27.

Scheer framed the contest as coming down to a choice between him or Bernier, accusing him of seeking to “impose a personal ideology that will speak to a more and more narrow sector of the Canadian electorate.”

But it’s a ranked ballot, and so candidates are also trying to lock in second-place votes.

O’Toole took a direct swipe at Scheer, accusing him of deliberately seeking to sit out life as a politician when he opted to run for Speaker, a move that drew boos from the crowd.

Even for those who are currently polling far down the pack made the case that all voters’ opinions need to be heard.

“You’ll be using your vote to send a strong, clear message about what matters to you,” said Pierre Lemieux, who is running explicitly to give social conservatives a voice in the race.

While O’Leary has said he’ll back Bernier, B.C. businessman Rick Peterson said he hoped O’Leary supporters would look in his direction, given he’s also an outsider businessman with no political experience.