In this week’s cover story, Quebec bureau chief Martin Patriquin looks at how the Parti Québécois recruited media mogul Pierre Karl Péladeau and what it means for the separatists in the upcoming election. 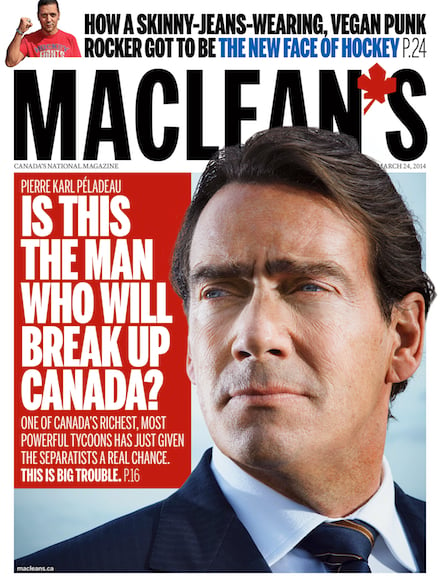 The Parti Québécois has long been a party of principled losers. The act of losing—elections, referendums, its leaders—is practically ingrained in the party’s DNA. Consider René Lévesque’s humiliating loss of the 1980 referendum and his subsequent shivving by party brass when he dared question the PQ’s sovereignty raison-d’être. Consider how every PQ leader in his wake has left the party under a similar cloud of bitterness and loss. Consider, as current PQ Leader Pauline Marois has clearly done, how the PQ’s stubbornly leftist base has shackled its leader to an equally stubborn (if unofficial) mantra: being ideologically correct is more important than any electoral win.

No more. Over the latter half of her 18 months in power, Premier Marois has done the near-impossible: squelched infighting and silenced dissent within the PQ’s ranks, pivoted away from her own party’s social democratic underpinnings and pushed forward with a contentious campaign on Quebec identity that has nonetheless put her party within reach of a majority government for the first time in more than a decade.

Marois has now punctuated her transformation by recruiting media mogul Pierre Karl Péladeau, former Quebecor CEO and arguably Quebec’s best-known, most notorious businessman. Péladeau the businessman has media holdings within and beyond Quebec, and has spent his career being coy on Quebec’s national question—if only to better do business in both official languages. Péladeau the politician put an end to the ambiguity at a news conference announcing his candidacy in the suburban riding of Saint-Jérôme. “My support of the Parti Québécois is a support of my deepest-held and most personal values, and that is to make Quebec a country,” he said, pumping his right fist in the air.

The French call it coup de theatre, a turn of events so spectacular it changes the dynamics of the entire campaign. Péladeau, 52, brings business bona fides and a conservative bent to the Parti Québécois, and serves as example to the success of the party’s quasi-ethnic nationalist electoral platform. All of this makes him (and the PQ) a contender in Saint-Jérôme and the neighbouring ring of suburban ridings around Montreal, home to large swaths of white, francophone conservative voters key to a PQ majority.

If it was at all ambiguous before, Péladeau’s entry can’t make it any clearer: should Marois win a majority on April 7, Canada will be subject to yet another unity crisis—and some are warning that the federal government is as ill-prepared for such a thing as it was in 1995, when Quebec came within a hair’s breadth of leaving Confederation.

Look for the full story, on newsstands Thursday.