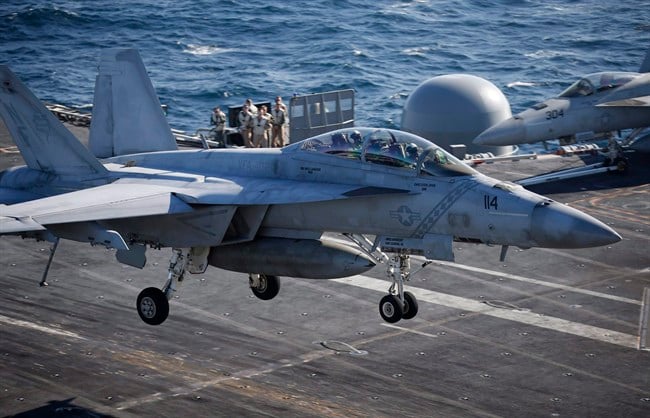 The Liberal government said Tuesday it will look to acquire 18 F-18 Super Hornets like this U.S. Navy F/A-18 Super Hornet to fill a capability gap. THE CANADIAN PRESS/AP-Kim Hong-Ji/Pool Photo via AP

The Liberals announced this week that the government will launch an open competition next year to replace all 77 of the air force’s CF-18s – a process that’s expected to last up to five years.

In the meantime, they say they will enter negotiations to purchase Boeing Super Hornets without a competition because the air force is facing a critical shortage of warplanes, which poses an “urgent” need.

Such a need is one of the few exceptions in the federal procurement law that lets the government purchase new military equipment as a stop-gap until a full competition can be held.

Public Procurement Minister Judy Foote’s spokeswoman, Jessica Turner, said in an email that applying the exception will let the government “move forward on an expedient basis to obtain the equipment that the men and women of the air force needs.”

But in separate interviews, Alan Williams and Dan Ross said they don’t believe there really is an urgent need as the government could pick a new fighter jet through an open competition in two years or less.

“I question the whole legality of this,” said Williams, who served as assistant deputy minister of materiel at National Defence from 2000 to 2005 and has been a vocal critic of sole-sourcing defence contracts.

“Holding a competition within a year is even doable. It’s not like you’re starting everything all over again.”

They also said operating an “interim” fleet would significantly increase the air force’s operational costs, not to mention the billions that will be spent to simply acquire the Super Hornets.

“This was probably the worst possible option,” said Ross, who succeeded Williams as assistant deputy minister of materiel and recommended the F-35 to the previous Conservative government.

“The taxpayers will bear the cost of this and it’s not necessary.”

The government has refused to say how much it expects to pay for the Super Hornets, or what it will do with them if another jet fighter wins the promised competition.

But Ross and Williams predicted the figure could run anywhere between $3 billion and $8 billion, depending on what is included and how long they are kept.