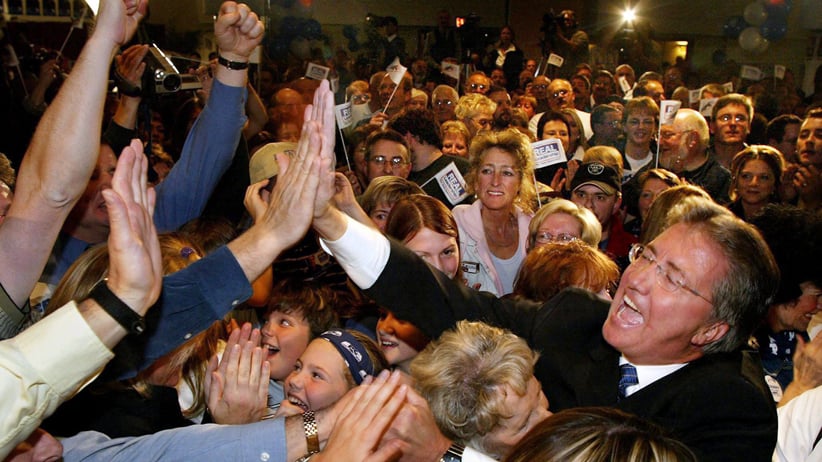 There’s a scene in Danny, the NFB’s new biopic of Danny Williams, that feels better suited to a New Jersey basement than a tête-à-tête between Prime Minister Stephen Harper and the then-premier of Newfoundland and Labrador. The meeting took place in a Gander hotel room in late 2006. At issue was Newfoundland’s oil royalties. Williams wanted them. Harper, though he’d eventually concede to Williams on the issue, was not prepared to hand over a bigger share at that point.

“You’re not going to [expletive] up my country,” Williams recalls Harper telling him, the assertion “like a red flag to the bull” for the scrappy ex-lawyer. “Oh, is that right?” he responded, inching closer to Harper. “If you [expletive] with my province,” he told the Prime Minister, “I’ll chase you to the four corners of the [expletive] Earth.”

Anecdotes like these are chock-a-block in the new film, a fascinating close-up of the Rock’s beloved former premier. At one point, Williams recalls blaring Tom Petty’s I Won’t Back Down over and over again when 10,000 government workers turned up outside his office in St. John’s Confederation Building, “a lot of them shaking their fists up at me.” Williams, in his first act as premier, had frozen public sector wages, then introduced the toughest back-to-work legislation in Canadian history to shut down a strike. The song, he says, “kept me motivated. I had to stay my course. We had to get this province to swing around.”

Williams, now the CEO of the IceCaps, the city’s AHL franchise, says his thirst for battle was innate: “Even playing hockey, I never could back down from a fight, never could back down from the bully, never could back down from somebody who was trying to push somebody else around. Maybe it came from being that little guy who got the smack in the face a long time ago, and nobody came to help him out.” The underdog metaphor works on more than a personal level. Williams understood, embodied and fomented Newfoundlanders’ long-held belief that the province is put upon by outsiders, an amorphous group “always coming in and cherry-picking us,” Williams explains.

Far from just a scrapper, the man sure can tell a story. His wrenching telling of his exit from his father’s law firm is almost cinematic. Williams, then a young lawyer, recognized that, at Williams & Williams, he was fated to forever be “the son, not the partner.” But he was his dad’s eldest, his pride. “As I walked out that day, he was standing at the top of the stairs. I remember looking up at him, tears streaming down my cheeks. He wasn’t going to cry—he was too proud a man for that. But I knew it had to be tearing his heart out because it was tearing out mine.”

Still, the film, often fawning, avoids deeper questions (how did a Maserati-driving, hotshot lawyer become a folk hero?) and sorely lacks a critical voice. Williams is repeatedly described as “brilliant”; as a lawyer, he was “like Matlock or Perry Mason.” And consider the treatment of his marriage: Williams’s wife, Maureen, is introduced in playful, candid snapshots—on Danny’s shoulders, in white go-go boots, in a cardboard crown—then summarily dropped. Dais shots are cropped, showing only Williams, leaving viewers to guess: Is Maureen camera-shy? Did she die?

One can surmise the reason for the excision. As premier, Williams once stopped speaking to the CBC for a period after a radio panelist, not employed by the broadcaster, mentioned the premier’s divorce in passing in a media critique. (By then, local media were treating Maureen the same way the NFB did, ceasing mention of her.) That Williams’s broken marriage was scarcely mentioned is instructive: The pit bull of Newfoundland politics also has a stranglehold on his own narrative. No one dares defy him.

“If you stick around for too long, you start to believe your own bulls–t,” Williams said, explaining his 2010 decision to step down. The announcement didn’t just shock media: Kathy Dunderdale, then his deputy, learned of Williams’s plans only hours before his farewell. In the three years since, Newfoundland’s ruling Tories have failed to rebound, losing the last four by-elections. Last month, the party installed its third leader in as many years, Paul Davis, who inherited a public works scandal and an unpopular party.

Danny, suffice it to say, lands just as Newfoundlanders have begun feeling a deep nostalgia for the man Paul Martin’s PMO reportedly dubbed “that asshole from Newfoundland.” In the coming weeks, the film will be screened across the province, from Labrador City to Corner Brook to Clarenville. In Newfoundland, Danny is still the king.