The former Grand Wizard of the Klu Klux Klan seeks office again. Can he win again? 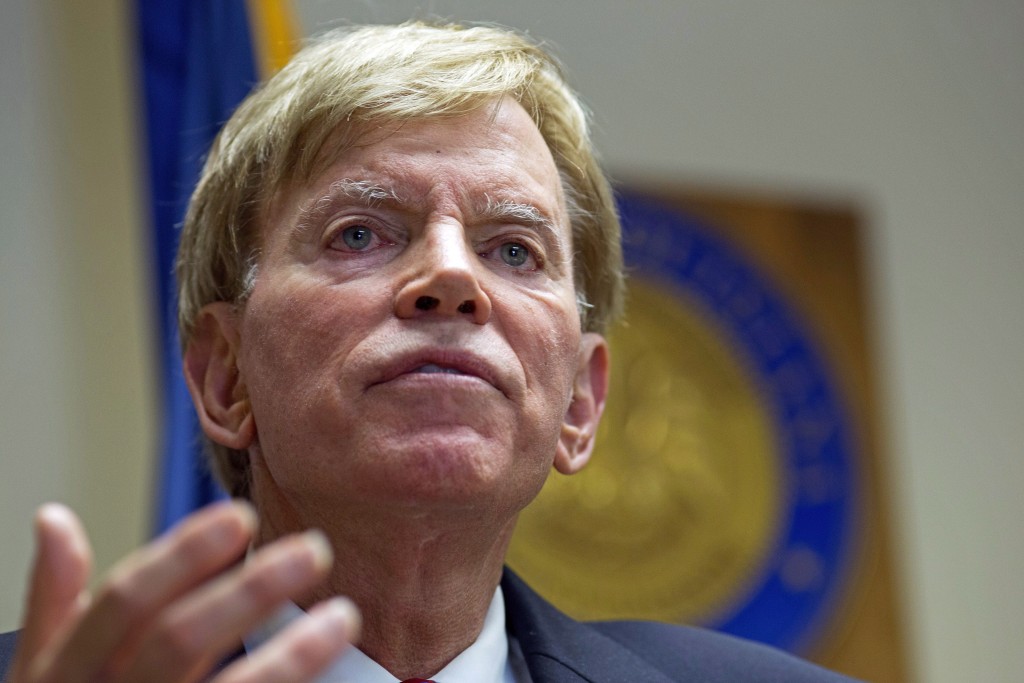 NEW ORLEANS – It would be hard to overstate how much former KKK leader David Duke has attempted to link his 2016 surprise Senate bid to that of the Republican presidential nominee, Donald Trump.

He mentioned Trump during a YouTube announcement of his bid and spoke repeatedly during an hour-long news conference about how Trump and the Republicans had embraced his vision of America. References to Trump now compete for attention on Duke’s website with anti-Zionist posts that include the theory that Jewish conspirators somehow worked passages from a Michelle Obama speech into Melania Trump’s convention address last week.

Duke, 66, has never matched the political stardom he achieved when he made a credible run for governor of Louisiana in 1991. And many analysts and observers say his time is past. With many candidates espousing “law and order” politics, Duke, a convicted felon known more for running for office than winning races, may simply have too much baggage.

But in an election where the rise of showboat businessman and reality TV personality Trump has taken the establishment by surprise, Duke obviously feels conditions are ripe for him to make another run. Analysts and observers say Duke can play on similar themes as Trump, such as fears of unchecked immigration, attacks against police, the loss of jobs to free trade and an outsider status. With the rise of social media, Duke feels he has other avenues to reach voters other than mainstream advertising or traditional media.

“What’s interesting to me is that he feels emboldened enough to step into the arena one more time,” said Michael Flamm, history professor at Ohio Wesleyan University and author of “In the Heat of the Summer: The New York Riots of 1964 and the War on Crime.”

“I do think the Trump campaign has brought a racial backlash element back into the mainstream,” said Flamm.

He shocked political observers in 1991 by getting into a runoff for the governor’s race with Democratic former Gov. Edwin Edwards, whose three previous terms had been marked by scandal. The prospect of a white supremacist as governor so startled many in the state that many Republicans joined Democrats to vote against him. His opponents printed bumper stickers imploring: “Vote for the crook. It’s important.”

Duke got 39 per cent of the vote and would never do as well again.

At work at the time, says longtime pollster Michael McKeon, were factors that went beyond any anti-black vote that was at the core of Duke’s appeal: economic doldrums following a crash in the oil economy in the 1980s, broad disaffection with the federal government and a fear of “a loss of control.”

Louisiana is again suffering with a weak oil economy. And, McKeon, who predicted Duke’s 1991 success, says anti-government fervour is even higher now.

Trump’s anti-immigrant, anti-free trade stance appears to dovetail with Duke’s long-held insistence that white descendants of Europeans in America are the victims of discrimination. Many white supremacists – they prefer the terms “Europeanists,” ”alt-right,“ or even ”white nationalists” – rallied behind Trump at the Republican National Convention last week.

Pearson Cross, a political scientist at the University of Louisiana at Lafayette, says Trump has adopted or co-opted many of the issues Duke has preached for a long time such as the dangers of unfettered immigration or unfair trade deals.

Speaking of Duke, Cross said: “He sees that his issues have come back to be centre at least in the Republican party.”

Trump faced criticism from some GOP leaders for failing during the primary season to immediately denounce the tacit endorsement from Duke, who once said on his radio show that a vote for any other candidate “is really treason to your heritage.” Trump eventually did disavow Duke and after Duke declared his candidacy Friday, Trump swiftly said Sunday on “Meet the Press” that he “rebuked” Duke’s support.

Cross said he anticipates that the Democratic party would attempt to link Trump and Duke, pointing out that a former KKK member admires Trump and the way he’s operating.

Whether any of this will give Duke an election boost remains to be seen.

“I assume if there are two candidates espousing law and order, the one who will win will be the one carrying less baggage,” Flamm said.

McKeon believes Duke’s time is likely past. In the age of social media, McKeon said, Duke’s ability to command attention has been greatly diminished.

“He was radical enough that he would say stuff that people would pay attention to him,” McKeon said. “Now, it’s virtually impossible to shock anybody.”

Others note that he has other baggage, including a guilty plea to bilking supporters and cheating on taxes in a 2002 federal case led to a stretch in prison and further political obscurity.

Twenty-four people have signed up for the race – a non-partisan election to choose retiring Republican David Vitter’s successor. Among them are well-financed Republicans and two well-known Democrats.

Cross said he doesn’t give Duke much of a chance. In 1991 there were a lot of voters who were dissatisfied with the Democratic party’s championing of civil rights. But at that time Republicans had not really made overtures to them the way they have in recent years, playing up concerns over immigration for example.

He anticipated the most likely runoff would be between one Republican and one Democrat and the Republican probably wouldn’t be Duke. Instead, he sees Duke’s Senate run as more of a way for him to show that he was talking about some of these issues like immigration or trade decades ago and to sell more books.