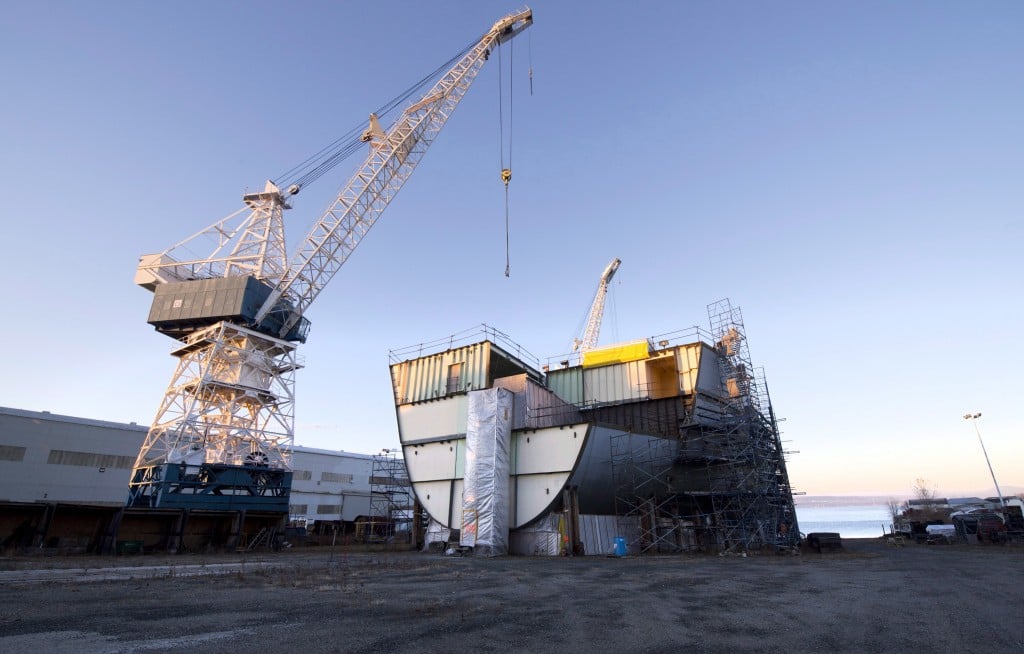 One of the three Cecon ships which construction has been halted over two years ago, sits sits on dry grounds Monday, November 19, 2012 at the Davie shipyard in Levis, Que. THE CANADIAN PRESS/Jacques Boissinot

OTTAWA – An unsolicited bid – potentially worth up to $1 billion – to provide icebreakers and multi-purpose ships for the coast guard was submitted to the Trudeau government late last month, The Canadian Press has learned.

The proposal by Quebec-based Chantier Davie Canada Inc. has the potential to undercut one pillar of the national shipbuilding strategy, which delegates the construction of civilian ships to Vancouver’s Seaspan shipyard.

In a presentation to Public Services and Procurement Canada, Davie is partially reviving a pitch made to the former Conservative government in 2013, where it offered to a construct a Polar Class 3 icebreaker and deliver it in 18 months.

The latest bid offers not only that, but three smaller so-called River-class icebreakers and two multi-purpose ships, which could be used for scientific research, border patrol of search and rescue.

The pitch involves converting three different types of vessels which Davie already has under construction – or can be obtained on the international market “at highly affordable prices.”

Some of the ships were being built for the offshore oil and gas sector, but the collapse in energy prices has led to their cancellation.

“This is a fast-track solution providing enhanced capabilities at a fraction of the newbuilding (sic) price,” said the proposal.

Davie says its ships can be delivered at 60 per cent of the cost of the current program with Seaspan and gives the federal government the option of either buying or leasing the vessels.

The prices are blacked out from a copy of the Feb. 24 cover letter to Public Services and Procurement Minister Judy Foote, which was obtained by The Canadian Press. But officials, speaking on background because they’re not authorized to talk to the media, say the pitch adds up to at least $1 billion, depending on the options chosen.

Alex Vicefield, CEO of Davie’s parent company, said the pitch “has been very well received,” but would not go into detail.

Public services and procurement spokesman Pierre-Alain Bujold would not confirm receipt of the proposal but did say the government has not issued a request for proposals for icebreakers and reaffirmed the department’s commitment to the overall shipbuilding program.

Vicefield said there is a business opportunity but also an important public policy issue at stake.

“We come from the international marine industry where we have to be innovative and lean to compete,” he said Wednesday.

“When we see a situation which is clearly facing all kinds of problems and we have solutions which can save our client many hundreds of millions of dollars and receive an even better product faster, it would not be in anyone’s interest to hold back.”

Davie used a similar approach to the federal government when it pitched – and won – a multimillion-dollar contract to provide the navy with a temporary supply ship. The former Harper government had to amend cabinet rules in order to allow the sole-sourced contract to go through.

Both Seaspan and Halifax-based Irving Shipyards, the other company in the national shipbuilding program, protested and the Liberals, shortly after being elected last fall, temporarily put the plan on hold. They relented and Davie has already begun the modifications for the leased ship.

Jonathan Whitworth, the CEO of Seaspan, said the new bid is an attempt to undermine the shipbuilding program, where the fundamental premise was to establish only two go-to shipyards in the country – one for combat, the other for civilian vessels.

“The worst thing we could do is to stop, alter or otherwise change the (National Shipbuilding Procurement Strategy) before it’s actually really gotten underway,” he said in an interview Wednesday.

One of the biggest criticisms of the program, which was launched in 2011, is that it has yet to produce a single ship, something the Davie proposal plays on in its presentation by referencing the age of the current decades-old fleet.

“What has become increasingly evident is that it would be considerably more cost-effective and considerably better for the men and women of the Canadian Coast Guard to fully replace these over-aged vessels,” said the presentation.

Whitworth would not discuss the potential legal ramifications of the Liberals running with the Davie proposal. But he said if the federal government was looking for stop-gap ships until Seaspan delivered, then it should allow an open competition among all the shipyards in Canada rather than a “sole-source gift” as the previous government did with the navy supply ship.