'We Europeans have our fate in our own hands.' 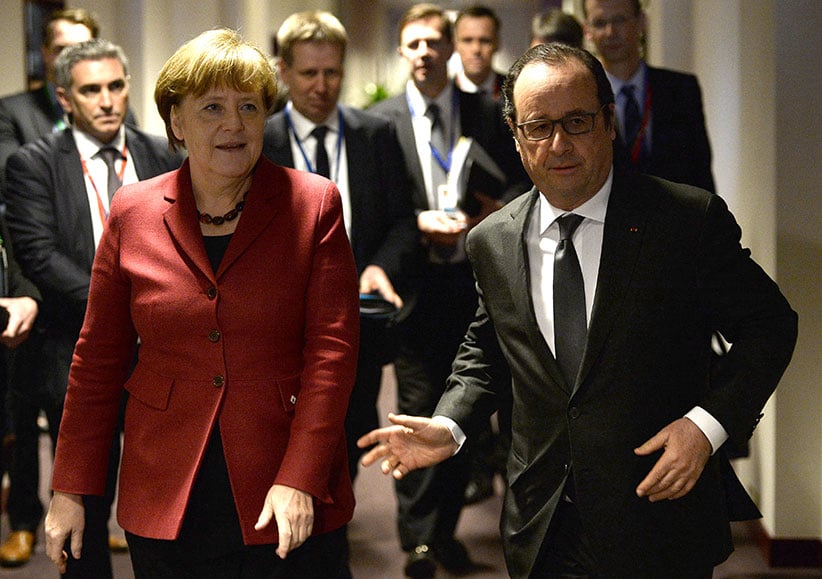 BRUSSELS — European Union nations bracing for the looming Donald Trump presidency showed defiance Monday in the face of the president-elect’s stinging comments on everything from NATO and German cars to the crumbling of the EU itself.

Trump also said Britain’s decision to leave the 28-nation European Union would “end up being a great thing,” and he predicted that other countries would also leave.

At a meeting of EU ministers, French Foreign Minister Jean-Marc Ayrault said the best response to such comments was simple — “it is the unity of the Europeans.”

In Berlin, German Chancellor Angela Merkel insisted: “We Europeans have our fate in our own hands.”

“I’m personally going to wait until the American president takes office, and then we will naturally work with him on all levels,” she told reporters.

French President Francois Hollande was even more outspoken in his defiance.

Europe “has no need for outside advice to tell it what to do,” Hollande said at a ceremony for outgoing U.S. ambassador in Paris Jane Hartley.

“Europe will always be willing to pursue trans-Atlantic co-operation, but it will base its decisions on its interests and its values,” he added.

Some EU officials fear Trump’s frequent, often acerbic Twitter postings might be the prelude to a caustic presidency after Friday’s inauguration.

“We are going to move away from, I guess, a kind of Twitter diplomacy, and then into a reality,” said Danish Foreign Minister Anders Samuelsen, adding that reality could be “perhaps more difficult than what is going on on Twitter.”

EU foreign ministers were already worried what Trump might do beyond their continent. They came out against any plan by Trump to move the U.S. Embassy in Israel to Jerusalem and warned that it could ratchet up tensions with the Arab world.

“It is very important for us all to refrain from unilateral actions,” EU foreign policy chief Federica Mogherini said. “We hope that there can be reflection on consequences of any move that is taken,” she said.

Although Trump had made similar statements about NATO during his election campaign, his recent comments still came as a bit of a surprise since his choice for defence secretary, retired Marine Gen. James Mattis, stressed his support for the NATO military alliance in his U.S. congressional confirmation hearing last week.

Trump’s views, in an interview published Monday with German daily Bild and The Times of London, contradict Mattis, Steinmeier said.

“If one compares the positions of the designated president and the future foreign and defence ministers, then one can’t discern a common foreign policy line among the new U.S. government,” he said.

There have even been fears the U.S. military commitment to Europe would wane under Trump. A German newspaper group reports that Lithuanian President Dalia Grybauskaite has urged Trump to continue meeting the U.S.’s financial obligations toward the alliance.

“Since World War II, the presence of U.S. troops has been a prerequisite for rebuilding the continent, safeguarding peace and ensuring security,” she told the RND network of some 30 German papers.

“We expect continuity from the new U.S. administration. Trump must maintain this leadership role, to ensure security, stability and peace,” she was quoted as saying.

Trump indicated he was indifferent to whether the EU stays together or not, a sharp break from the Obama administration, which encouraged British people to vote to remain in the EU in the June referendum.

“I believe others will leave … I do think keeping it together is not gonna be as easy as a lot of people think,” Trump said in the interview.

The British exit from the EU would “end up being a great thing,” he said.

British Foreign Secretary Boris Johnson said it’s “very good news that the United States of America wants to do a good free trade deal with us and wants to do it very fast.”

Trump was less kind to German industry officials, saying car manufacturers including BMW could face tariffs of up to 35 per cent if they set up plants in Mexico instead of in the U.S. and try to export the cars to the U.S.

Gabriel suggested Europeans should exhibit more self-confidence in dealing with Trump. “We’re not weak and inferior,” he said.

Whatever his goal, Trump’s comments were strong enough to make him the talk of the town in European capitals.

“It is clear that we are discussing this issue all the time,” Czech Foreign Minister Lubomir Zaoralek said at the EU meeting in Brussels.