Did Kathleen Wynne abuse the power of prorogation?

Since Stephen Harper prorogued Parliament to save his government in 2008, the rarely-used power has drawn criticism as a political tactic 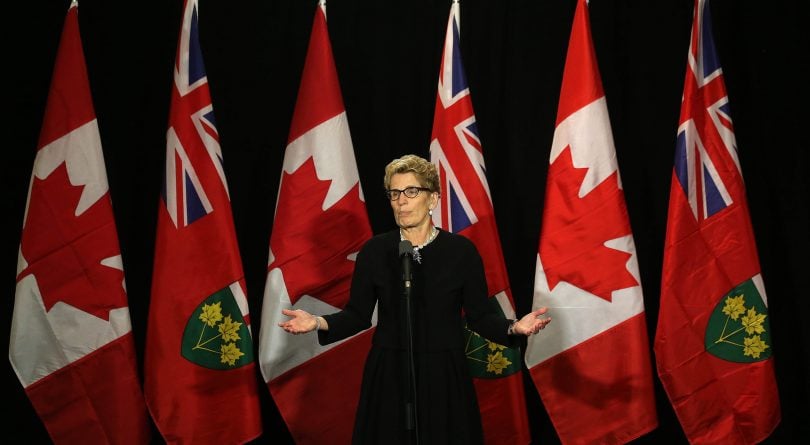 Ontario Premier Kathleen Wynne’s decision last week to prorogue the Ontario legislature and start a new session with a Speech from the Throne this Monday has been derided as a political stunt by her opponents. But did she abuse this rarely used power?

So much of what the public knows about prorogation has been tainted by the crisis of 2008, when Stephen Harper decided to invoke it three weeks after Parliament was summoned after the election that year, as he faced a sudden confidence vote and potential coalition government to replace his minority.

In the time since, whenever a government invokes prorogation, it is decried as “shutting down democracy” and of having nefarious intention.

In truth, prorogation is a normal part of the parliamentary cycle in the Westminster system. Traditionally, when Parliament only sat for a few months of the year, it would be called at the end of those months-long sessions in order to signal that it would start fresh when legislators returned. Yearly prorogations still happen in the U.K. parliament, on a clockwork schedule, with a built-in “washing up” period for the government to get the last bits of business through before prorogation is called.

READ MORE: Prorogue is kind of a weird word

Traditionally as well, prorogation would be accompanied by a speech from the Queen (it is now carried out in the U.K. by the Lords Commissioners) or Governor General. In Canada, it eventually devolved to being delivered by the Chief Justice of the Supreme Court of Canada, acting in their capacity as deputy GG—thanks to William Lyon Mackenzie King, who in 1939 took advantage of Lord Tweedsmuir being away to call for a prorogation. The practice ended in 1983 under Pierre Trudeau when he did away with prorogation ceremonies entirely.

The purpose of a prorogation ceremony is for the government to list off its accomplishments, which can be compared to the agenda that was set out during the previous Throne Speech—another way of Parliament being able to hold government to account for the promises made (and this is something that Justin Trudeau has floated restoring as part of his parliamentary reform ideas).

The use of prorogation to avoid the House of Commons was largely a non-issue for most of Canadian history, with the exception of the very early example of Sir John A. Macdonald invoking it to avoid a confidence vote on the Pacific Scandal in 1873. At the time, the Governor General allowed it, but limited it to 10 weeks, and at the end of that time, Macdonald’s government still fell.

This set of circumstances didn’t happen again until 2008, when Stephen Harper’s recently-elected minority government provoked the opposition by announcing the intention of doing away with the per-vote subsidy—a move that was seen to be attempting to kneecap opposition parties—and talks of a coalition soon followed.

Harper asked Governor General Michaëlle Jean for a prorogation to allow tempers to cool, and while she did end up granting it, controversially, she made Harper wait outside of her office for over two hours as a way of sending a message to him that it was a serious decision that warranted reflection.

Harper’s subsequent uses of prorogation in 2009, this time by a telephone call to Jean on the evening of Dec. 30 rather than an in-person request, was billed as letting Parliamentarians take in the upcoming Vancouver Olympics. But the move was criticized as trying to avoid having to answer for the Afghan detainee issue. In 2013, when Harper prorogued Parliament, this time with a majority government, it was far less controversial as he had mostly checked the items off of his agenda. Still, there were accusations that he was trying to avoid questions around the Senate expenses scandal.

Ontario did have its own questionable prorogation in October 2012 when then-premier Dalton McGuinty prorogued in advance of announcing his resignation, and to give time for his party to hold a convention to replace him—a convention that Kathleen Wynne won.

In this current example, Wynne used prorogation and the Throne Speech to lay out her government’s intentions in advance of a fixed-date election. While not improper—she was not trying to avoid a confidence vote or to turn the heat down on a scandal facing her government—there have been questions as to the propriety of using the Lieutenant Governor as the mouthpiece of what is essentially an electoral platform.

Other provincial legislatures have made a habit of this as well (albeit without the fixed election date), most notably Alberta, where having a Throne Speech in advance of an election call goes back as far as Peter Lougheed in 1975, and again in 1986, 1989, 1997, 2001, and most recently in 2008.

While Wynne’s employing the tactic may quite rightly smack of politics, she does have some Canadian precedent on her side.

Correction, March 20, 2018: In the U.K. prorogation is now accompanied by a speech by the Lords Commissioners, not the Queen as stated in an earlier version of this story.