After the G20 summit, news coverage focused on the U.S. president's commitment to lobby for the release of Michael Kovrig and Michael Spavor. But did he even make that promise? 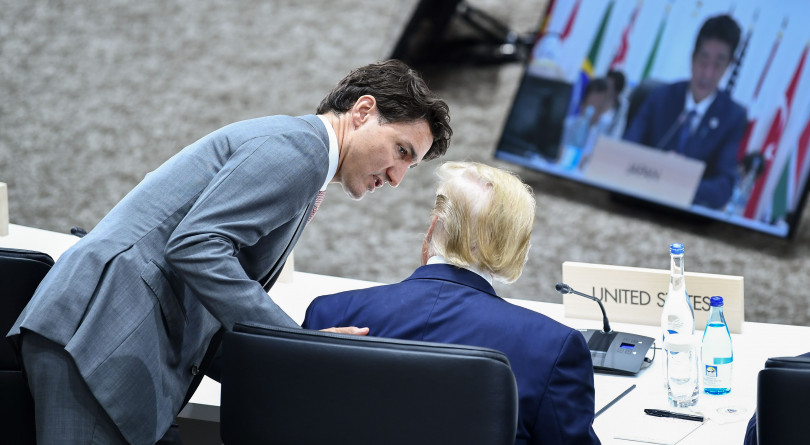 If you look at the transcript from the Oval Office, I suppose it looks like a commitment.

Asked—several different ways, about which more in a moment—whether he would raise the issue of two detained Canadians, Michael Kovrig and Michael Spavor, with Chinese president Xi Jinping at the G20 summit in Japan, U.S. President Donald Trump said on June 20, “I would. At Justin’s request, I will absolutely bring that up.”

Solid as a rock, right?

The problem with Trump is that virtually everything he says arrives with a generous side of word salad, so you’re left trying to extract firm meaning on the positions of the most powerful person in the world from a pile of mental and verbal flotsam and jetsam. Everyone is doing their level best and reporting back dutifully, but they’re still all just coming up with a damp handful of what-have-you.

Now, the G20 summit is in the rearview mirror and Canadian news coverage is focused on the fact that Trump may not have raised Canada’s seemingly intractable dispute with China—the arrest in December of Huawei executive Meng Wanzhou on a U.S. extradition order, the subsequent nabbing of the two Canadians and an escalating campaign of performative rage and trade snafus emanating from Beijing—with Xi at all. So it’s useful to take a closer look at the Oval Office conversation in which Trump appeared to say he would help out his buddy Justin.

The first reporter with a China-related question in the shouty herd crowded around Trump, Trudeau and some nice Nana-furniture in the Oval asked, “Mr. President, what are your concerns about China and the Canadians who are detained, sir?” Trump’s immediate reply was, “No concerns,” which registered like a man who reflexively bats away any notion of problems or snags, because such a thing cannot exist in a world in which he is firmly in charge and getting everything done tremendously.

But Trump may have realized midway through his reply that there was something more specific in the question, because he continued, “We’ll be discussing that. It’ll be one of the issues that I think we’ll be discussing right now with Justin.”

There were a couple of questions about other topics, and then someone asked, “Will you help Justin Trudeau get a meeting with Xi Jinping at the G20 next week to talk about the detained Canadians?” To which Trump replied, “Well, I don’t know that he’s trying to meet.”

Then he paused and twisted around to address Trudeau directly: “Are you trying to get a meeting?” I’ve heard some media interpret this as Trump tossing passive-aggressive shade at the adorable little Prime Minister who couldn’t even lock down a big meeting, but that didn’t seem to be it. Trump appeared to have no clue of the context or progression of events here. By way of answering Trump, Trudeau just smiled delicately and said, “We’ve got a lot of things to discuss.”

READ MORE: What a nice little airplane you have, Mr. President

From here, the press conference took on the feel of a class on the final day before the exam, with the keeners gamely trying to offer hints to the guy who clearly hadn’t done any of the readings. “He wants one, but Xi won’t meet with him,” one reporter offered, as part of this live staged reading of Coles Notes: The Current Situation Between China and Canada.

It often feels like press conferences are, for Trump, just a wall of noise and irritation, until he spies an opening afforded by a topic or framing he likes. And here a doorway marked “You Can Be The Big Deal Maker” seemed to open up before him, and he brightened and strolled right through. “I’ll represent him well, I will tell you,” he said. “We have a meeting set up with President Xi, and it’s obviously on the big transaction that we’re talking about and negotiating. Our people are actually speaking now, and we’ll see what happens with that. But anything I can do to help Canada, I will be doing.”

One more reporter tried to pin things down: “Are you planning to bring it up with President Xi when you meet with him?” And that is how we arrived at the most unequivocal statement from Trump and the thing everyone seemed to hang their hats on afterward: “I would. At Justin’s request, I will absolutely bring that up.”

But he delivered this line in a very specific offhand, upbeat and cavalier tone. Have you ever been out with friends, and in the happy flush of the moment late one night, you announce that this summer, you will visit your friend who lives in a remote and not-terribly-appealing city, and when they say “Are you sure,” you roar that of course you will, because you love them and anyway their city sounds great, so let’s book it. That was the vibe with which Trump committed, such as it was, to somehow intervening on Canada’s behalf with China.

Which is why it didn’t feel terribly surprising that there may not have been any follow-through: it was less a statement of intent than waving your hand in the air and bellowing “Yeah, sure!” in a moment when such a thing seemed destined to get a positive response from the room.

You could also see a certain careful equivocation afterward in public and back-channel statements from the Prime Minister’s Office and other high-level government sources on Trump’s putative offer of help—though it’s tough to say whether that is because the pledge seemed to be written on the wind, or because it’s risky to cast Canada’s foreign policy lot in too definitively with a volatile U.S. president who has his own considerable China problems right now.

In a news conference on the sweltering roof of the Canadian Embassy in Washington a few hours after the Oval Office photo op, Trudeau said he’d had an “extended conversation” with Trump about the two detained Canadians and the broader fisticuffs with China. But he stuck deliberately to the passive voice when he was asked more specifically about Trump’s help, saying only that “We absolutely expect” the subject of the two Canadians to be on the agenda in Osaka.

After the G20, no one would say what Trump had addressed. According to one amusing report, one White House official would not comment on the discussion with Xi, another inexplicably referred questions to the Canadian government, the PMO had nothing to add and Foreign Affairs Minister Chrystia Freeland’s office punted questions back to the White House. The snake eats its own tail, and since its mouth is currently full, it has nothing to add on the topic at hand.

Curiously, when Vice-President Mike Pence visited Ottawa a few weeks before Trudeau’s visit to Washington, he had offered up, without being asked, that Trump would address the detained Canadians when he met with Xi. “We are in the midst of significant discussions over our trading relationship,” he said. “But I can assure you in that context and going forward, we’re going to continue to urge China to release the Canadian citizens, even while we deal with the larger economic and structural issues between the United States and China.”

Notably, however, even that voluntary offer of help seemed to be met with circumspection from the PMO; when Maclean’s inquired whether Trudeau had asked for that commitment in his meeting with the vice-president or followed up on the offer afterward, the PMO did not respond.