Does John Horgan have the stuff to beat Christy Clark?

The leader the B.C. NDP says he's both kind and "hard-assed" enough to be premier 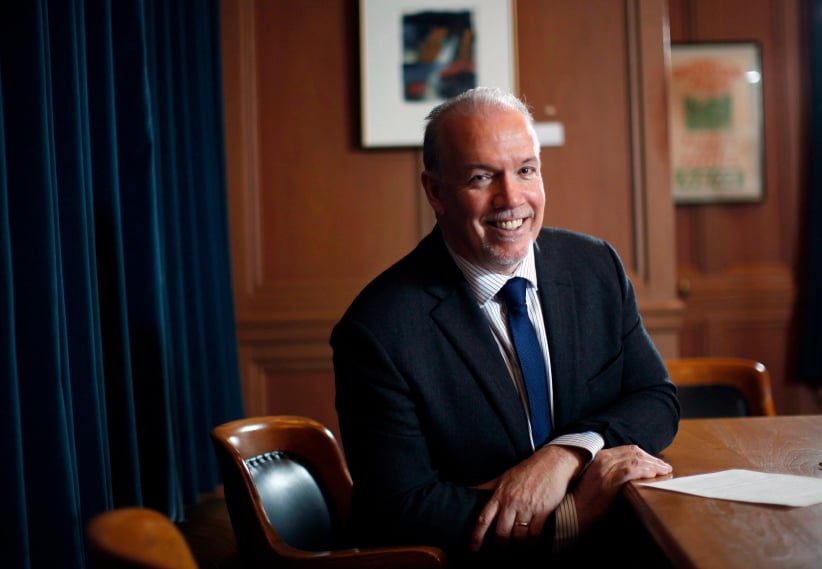 John Horgan is for all intents in full-campaign mode, with his first election as leader of the B.C. NDP less than a month away. Recent polls give him and his party a small lead over Premier Christy Clark and the B.C. Liberals, while controversy over the Grits’ fundraising practices, and the ongoing issue of high housing costs in the Lower Mainland, have further buoyed the NDP. Horgan, 57, spoke to Maclean’s B.C. correspondent Nancy Macdonald.

Q: What kind of opponent is Christy Clark?

A: Intense. Very capable. People underestimate her at their peril. I don’t want to personalize this, but I think whenever a political entity becomes accustomed to having its way as long as the Liberals have they become arrogant, bloated.

Q: Does she have a weak spot?

A: [The Liberals] think they’re invincible. They shouldn’t have won the last election and they did, and now they think they can get away with anything.

Q: You got an apology from the premier recently, after she falsely alleged the NDP criminally hacked the Liberal website, without evidence.

A: She apologized by voice mail. In it, she said we’d talk [at the next sitting of the legislature]. We sit 12 feet apart. She literally would not turn her head to me. What am I going to do? We engaged a lawyer; we had a really good case for defamation. There was nothing to be gained by it. She made a fool of herself all on her own.

Q: Clark announced recently that B.C.’s deputy attorney general has been asked to form an independent panel of non-partisan experts to consider ideas around campaign finance reform. What did you think?

A: I don’t believe a word she says. She put together a task force on climate action. Leading academics and environmentalists, municipal and labour leaders, worked hard, and came up with a climate plan for B.C. She didn’t implement any of it. There is no evidence the premier is going to take the panel’s advice, much less implement it. We would immediately ban corporate and union donations, ban donations from outside B.C., and limit the amount individuals can donate.

Q: Why do you oppose the Kinder Morgan pipeline expansion?

A: It might have made sense in the 1950s to have an export terminal for Alberta oil in the Burrard Inlet. But not now. The seven-fold increase in tanker traffic carrying raw bitumen—not a refined product—just doesn’t make sense for that sensitive marine environment.

Q: How will your opposition impact your relationship with Alberta’s NDP premier, Rachel Notley? Alberta New Democrats are staunch supporters of the Kinder Morgan expansion.

A: Rachel is a friend. She wants to get her natural resources to higher-priced markets. On this issue, we’ve agreed to disagree. Until First Nations people, and the people of British Columbia—particularly those living in the Georgia Basin, the Gulf Islands and the Juan de Fuca Strait—agree to accept the risk, I can’t see this being in our interest.

A: I’m not anti-pipeline at all. I take a balanced approach to these issues. [Kinder Morgan] is an Alberta issue brought home to B.C. by the Prime Minister of Canada. I support LNG—and I get a lot of grief over that. I’m all about maximizing the benefit of our resources in B.C. I don’t want to see B.C. exporting raw logs. I want to see B.C. exporting higher-value forestry products. Sending raw bitumen away in boats is sending jobs away, and I’m not prepared to do that.

Q: Last month, B.C. Liberal party surrogate, the Concerned Citizens for British Columbia, ran a full-page ad in both Vancouver daily newspapers. They “implore you to reverse your support for the NDP’s Leap Manifesto,” the radical manifesto that would overhaul Canada’s capitalist economy to quickly wean the country off fossil fuels. “Tens of thousands of British Columbians and their families would feel great pain if you implement the NDP’s Leap Manifesto,” it continued. Since you’ve never endorsed Leap, and have said it “doesn’t reflect the values of British Columbians,” what did you make of the ad?

A: It speaks to the dark money invading B.C. politics. I wasn’t in Edmonton, where the federal NDP recommended the party talk about [Leap] over the next couple years. And as I said the next day, it’s not for me. They’re deliberately obscuring the record. They used the same malicious tactics against the last NDP leader. I’m not going to sweat it. Anyone influenced by it likely wasn’t going to vote for me anyway. Growing up, I was always trying to make people happy. The Liberals consider that a character flaw. I think there’s more to be gained by uniting, rather than dividing people.

Q: What kind of New Democrat are you—more of a centrist, like Gary Doer, or a “CCF to Victory” true believer?

A: I’d say I’m a Harcourtian New Democrat. Like former B.C. Premier Mike Harcourt, I take a balanced approach to issues. I’m compassionate when it’s required of me, and hard-assed when that’s required.

A: I don’t know what Glen calls himself, but I know what Jimmy calls him: capable. That’s all I want to be. The labels of the past—communist and capitalist—have less relevance today; their importance has been declining since the Berlin Wall fell. What’s the most successful capitalist nation in the world right now? The communist Chinese. What they call themselves doesn’t really matter to people anymore.

Q: Glen Clark is predicting this will be the nastiest, most aggressive B.C. election campaign since 1996, when the NDP narrowly defeated Liberal Gordon Campbell, in a stunning, come-from-behind win—not unlike the one Clark pulled off in 2013.

A: The Liberals are going to put out all the stops on me for sure. I am going to hold them to account for their record. That’s my job.

Q: Where did you grow up?

A: Victoria. I was born Aug. 7, 1959—delivered via caesarean section. I was a surprise: I have two brothers—12 and 13 years my senior—and a sister six years older than me. From the start, I had very strong female role models. My dad died when I was a baby. My mom and sister raised me. It shaped my view of the world in positive ways.

Q: What did your mom teach you?

A: That we were fortunate people were willing to help us when we needed it; and that when someone needed my help, I had to step up. I’ve lived my life that way.

Q: You were the family jock, I understand.

A: I played basketball for Trent, and in Australia, for Sydney University, where I got my M.A.

Q: How do you differ from your siblings?

A: I was the only kid to get a post-secondary degree—because of the enormous sacrifices my mom made for me. My brothers were out of the house early—one became a firefighter, the other a longshoreman. My sister had three kids by 19. My life could have gone in a very different direction. I was failing out of high school in Grade 9—I failed four classes that year. I was checked out, focused only on sports. But I had a teacher who saw more in me than I saw in myself, and got me back on track. I ended up getting my Master’s degree. No one who knew me in my teens—or as a baby—would have considered that possible.

Q: You grew up poor, as I understand it.

A: My dad was the single breadwinner. After he died, my mom was able to get a job at the municipal hall.

A: A brain aneurysm—it hit on Christmas Eve.

Q: You were just six months old. Are you like him?

A: People say that a lot. I like to laugh. I’m passionate. He was Irish, a talker, as am I. My mom didn’t talk about him much, but when she did, it was always with a certain light in her eyes. He brought the Harlem Globetrotters to our house once, when I was a baby; they passed me around like a basketball. He loved the game; I was the only one in the family to play it. My brothers talk about how proud that would have made him.

Q: Did you feel his absence growing up?

A: My brothers watched out for me. When it really struck me was when I became a father myself. I was petrified at the prospect—I didn’t know how to do it. But both my boys turned out really well: both have degrees, careers. One is an account manager at Vancity Credit Union. The other is a musician in London. He teaches by day, and plays by night. But when my wife, Ellie, was pregnant, I was really panicking.

Q: How did you meet Ellie?

A: On our first day of university. We’ve been together ever since—33 years.

Q: Why do you think you work so well?

A: She calms me. She makes me laugh. She’s one of the most caring people I’ve ever met. If more people were like Ellie, the world would be a better place.

Q: Is your mom still alive?

A: She’s not. She got to vote for me once, though. She came to the polling station covered in John Horgan buttons, even though you’re not supposed to.

Q: Is she looking down on you?

A: I hope so. Everything I am is because of her. I’ll never forget it.