Donald Bayne relishes the boredom of his stage

Day 18 from the Duffy trial: A defence lawyer lulls a courtroom in the midst of voir dire 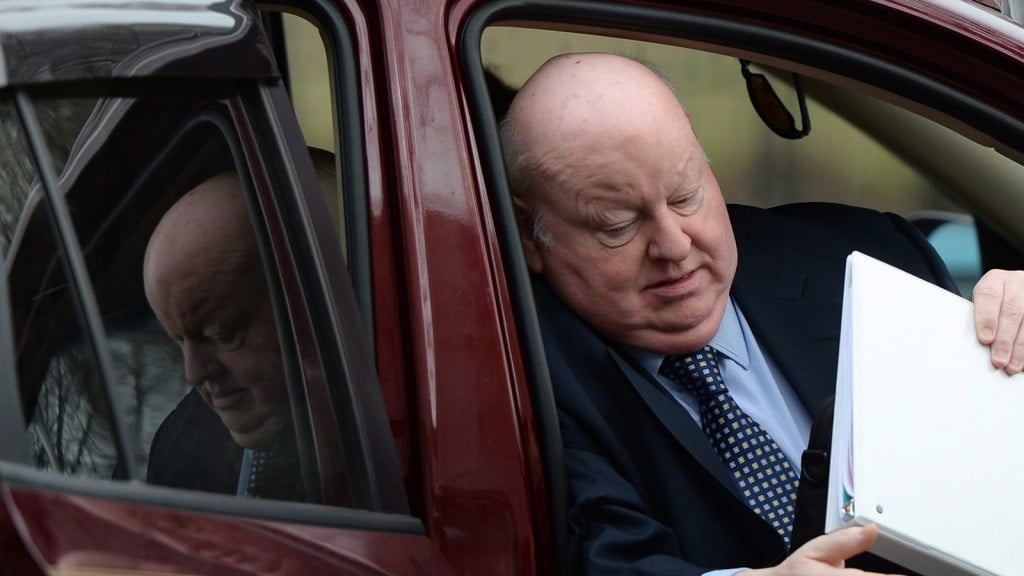 To be in Courtroom 33 today, and to hear Donald Bayne present his side of an argument about the admissibility of an internal Senate of Canada report, was to subject oneself to a dissertation on the nature of time’s passing, of boredom and its relationship to being, such that observers in the gallery, salaried courtroom staff, Crown prosecutors, maybe even the judge himself, were each individually confronted with their own mortalities, with the truth of the past’s irrecoverability, tedium as fact.

At 12:25 p.m., even suspended Sen. Mike Duffy, who is paying Bayne big moolah to defend him against 31 bribery, breach of trust and fraud-related charges at Ottawa’s Elgin Street courthouse, raised his fist to his mouth and attempted to stifle a yawn. It rose, anyway, to the surface of his being, briefly throwing it into disarray. Then Duffy massaged his prodigious forehead and, after that, his eyes, giving them all a good dough-kneading, returning his face to stolid order.

At issue in today’s proceedings: the 11th report of the Senate standing committee on internal economy, a document that Crown prosecutors don’t want entered as evidence because they deem it hearsay, or opinion. The ins and outs of that we’ll learn if we ever get to their side of this procedure, called a voir dire, a little trial within a trial used to decide narrow matters such as this. Bayne is doggedly arguing for its inclusion, because the report reinforces his idea of the Senate as a lawless realm where even the rule-enforcers have a dim understanding of how the non-rules work. Which would be awful helpful to his client Duff.

All day, Bayne’s rhetoric spun us into the stratosphere and achieved a sort of larger-than-life solidity, shorn of meaning but filled with identifiable words anyway:

“Interpretive and determinative!” “No suggestion of neglect or impropriety!” “A man’s liberty at stake!” “The full muscular onslaught of the Internet age!” “The keeper of the Senate records!” “Reproduced mechanically rather than by hand!” “No appreciable difference between a photocopy and the real thing!” “A big believer in judicial discretion and the wisdom of judges!” “To try and nail your feet to the floor!” “The sine qua non of admissibility!” “Importing hash oil!”

Bayne, Capt. Tedium, faster than a human attention span, his superpower an utter disregard for behavioural norms. In any other social or professional setting, this—to hijack a roomful of people and subject it to your voice for, like, five hours—would be acknowledged rude, probably even pathological.

In front of him, courtroom staffers demonstrated their chops as expert yawners and world-class whisperers. Behind him, a half-dozen reporters stopped taking notes. For their part, the prosecutors looked, from the back, positively cowed by Bayne’s verbiage, as though beaten about the head with sticks.

Justice Charles Vaillancourt? He has a superpower all his own: diligence and the capacity to remain alert in the face of Bayne.

From the spectator side, you entered the experience with a vague sense of self-congratulation that you ended up never succumbing to the dubious allure of law school. That warm feeling was soon replaced by a cooler assessment of the social utility of lawyers, and of silver-haired Ottawa defence counsel, in particular.

That was just the morning. As the lunch break wound down, and Bayne strode by the shuttered courtroom, members of the media reacted angrily when he flashed his teeth—Bayne’s is an older, Canadian version of the Jay Gatsby leer—and said he hadn’t quite finished his side of the voir dire.

“YOU’RE JOKING ME!!!” one reporter told him.

It became a very real question whether Bayne wasn’t performing some sort of filibuster, for it was a feat of endurance, his voice powerful until the end, though why he would want to prolong this process you’d need a legal mind as scheming and fox-like as his to know.

In the back row, meanwhile, a lawyer in full judicial robes flagrantly nodded off, his middle finger angrily distorting his brow. Elsewhere, jaws hung ajar. The eyes of a man who’d just entered the court widened in horrified astonishment as he watched the minutes sink into eternity, and it began to dawn on him that he’d never successfully recover all in his life that was lost. Then those eyes narrowed into subtraction signs, and he fell asleep.

By the mid-afternoon, Bayne’s presentation had reached such a length, such stultifying levels of tedium, that the absurd rolled in and erected a circus tent: Objects began floating in midair, thoughts appeared in solid form outside the heads of those sitting in the courtroom.

The atmosphere turned of its own accord to a laughing gas, prompting reporters to turn smiling at one another.

“Lord Tucker quoting Lord Blackburn in an earlier case,” said Bayne just then, a pronouncement that, in these new circumstances, journalists deemed hilarious.

Boredom is difficult to capture—without, you know, committing the sin. As New York Times book critic Michiko Kakutani observed of The Pale King, David Foster Wallace’s unfinished novel of boredom, set in an I.R.S. office in the midwestern United States: “Not surprisingly, a novel about boredom is, more than occasionally, boring.”

But, as Bayne perhaps sees it—let’s be really, really charitable to him and try to figure out what he was doing today—there’s good in that: As Bayne cranked us through the agony of time in precipitous deceleration, the existential abyss yawned before us like a sinkhole. Free of the flurry of furious activity that otherwise keeps them at bay, old heartaches rose to the surface of consciousness to trouble all our thoughts, half-remembered bad meals presented themselves to memory, awkward, embarrassing encounters with people not seen in decades.

Wrote Martin Heidegger, one of the few philosophers to tackle the topic of tedium: “Profound boredom, drifting here and there in the abysses of our existence like a muffling fog, removes all things and men and one self along with it, into a remarkable indifference. This boredom reveals being as a whole.”

Heidegger even had a taxonomy of boredom: “time as it drags,” “standing time” and “profound boredom.” Bayne acquainted us to all three.

Indeed, defenceman Bayne embraced this theme. You could not help but, in the weirdest way, admire him for it. The incredible exertion of voice, on his feet at the lectern. He is an athlete of tedium, the champion of monotony, and there’s something subversive in it—the Marlon Brando of Boredom, the James Dean of the Dull.

He is Duffy’s hero.

“To be, in a word, unborable,” wrote David Foster Wallace (before his suicide). “It is the key to modern life. If you are immune to boredom, there is literally nothing you cannot accomplish.”

Who knows? You might even get a disgraced senator off.

And he ain’t even done: Bayne claimed today he will finish his argument . . . tomorrow.

Meanwhile, Bayne and his Crown counterparts left the courtroom together today to make joint arrangements for a continuation of this trial beyond the hitherto allotted 41 days. There’s an outside chance we’ll learn tomorrow just how long the boredom will last. It may last forever.