Donald Trump and Canada: Are we really so different?

Justin Trudeau is drawing stark contrasts with the Trump administration. But it wasn't so long ago that a Canadian PM's values aligned with the new president. 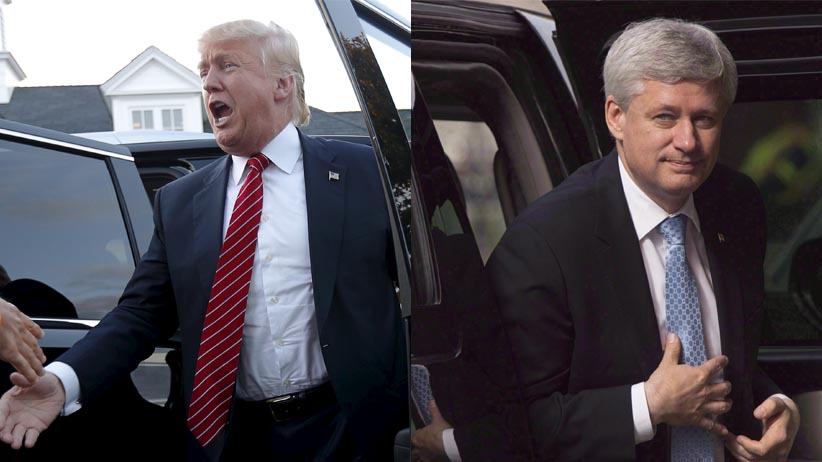 After a gunman killed six Muslims at a Quebec City mosque last month, the White House used the slaughter to defend its travel restrictions on seven Muslim-majority countries. Prime Minister Justin Trudeau, meanwhile, said to all Canadian Muslims that “we are with you,” sentiment that Canada’s opposition party leaders echoed immediately.

That cross-border disconnect has led to stark contrasts being drawn—in the Washington Post, for starters—between president Donald Trump’s “divisive, nationalist presidency” and “Canada’s current embrace of inclusiveness and multiculturalism.” Canada, writes the Post, is “the outspoken defender of values that Americans have long embraced as their own.”

That position as a champion of inclusiveness and democratic values may be true, or it may not: witness the government’s backing off of a promise cherished by many voters to reform Canada’s voting system, something the Edmonton Journal editorial board called “cowardly.”

Either way, any contrast with Trump on refugees tells only part of Canada’s story, and is in part a coincidence of timing. If Trump had been president roughly 500 days ago, columnists might be writing about an alignment of certain values across borders, albeit an imperfect one. It has only been that long, after all, since Canadians protested nationwide for their own government to open their hearts to Syrian refugees (as they now ask of the Trump administration).

Take Trump’s executive order on immigration, for example, which gives preferential treatment to religious minorities and has prompted allegations of discrimination. Canada has been there: former prime minister Stephen Harper’s government told visa officers in Jordan and Lebanon in February 2015 to track whether Syrian refugees were members of ethnic or religious minorities, in order to identify those cases for “expedited processing.”

Or take Trump’s tweet about taking in “thousands of illegal immigrants from Australia.” His choice of words expresses skepticism that these individuals being held in “processing centres” after arriving by boat can really be called refugees, regardless of status. During Harper’s era, Canada found itself in a debate over who was a genuine refugee and who were “bogus refugees.” The government implemented a system allowing for mandatory detention of “irregular arrivals”—a program that remains operational today.

The point here is not to re-litigate past Canadian political battles or lionize current political leadership, not to mention those vying for leadership positions. Harper’s Conservative Party of Canada has moved on and will pick a new leader on May 27. The differences between the candidates couldn’t be clearer, on everything from immigration to the environment. The New Democratic Party of Canada is also set to choose a new leader, and will also face a choice of how sharply it should change course from its path over the past few years.

That said, in the interest of muddying the waters on our cross-border disconnect, here are some other ways in which the Trump administration’s approach to governance shares some of the same tendencies—though quite exaggerated—as the Harper government that led Canada for close to a decade.

For one, there is Trump’s relationship with the press. As Policy Options editor-in-chief and former Parliament Hill reporter Jennifer Ditchburn has pointed out, reporters during the Harper years couldn’t help but feel that they were in an adversarial relationship with the government. Harper’s team, for example, fundraised off references to the “Ottawa media elite” that sunk to a “new low.” Trump and his chief strategist similarly call the press the “opposition party.” Worth noting here is that, as Reporters Without Borders and Canadian Journalists for Free Expression have stated, Canada still has a long way to go on press freedom.

The Trump administration is trying to tighten the screws on some public information, declaring that studies or data from Environmental Protection Agency scientists must undergo review by political appointees before any public release. The Sunlight Foundation is tracking several reports of U.S. government branches avoiding communication with the public unless authorized. The Harper Conservatives enforced rules requiring government scientists to go through government communications officers before talking to media, and subjected members of Parliament and ministers to vetting by the Prime Minister’s Office if they wanted to host public events.

Trump’s administration has taken websites about climate change offline; Harper’s government erased the website of the National Round Table on the Environment and the Economy, which published regular warnings about climate change. A New York Times report on a draft Trump order claims the administration may review multilateral treaties, including environmental agreements. Canada is no stranger to pulling out of environmental treaties, including the UN convention that fights droughts (which it re-joined only in December; message on the website: “Welcome back, Canada”) and the Kyoto protocol in 2011. (The Trudeau government ratified the Paris agreement last year.)

Another Trump provision commissions a “weekly report to publish a list of crimes committed by undocumented immigrants,” irking critics who say the initiative is meant to bolster anti-immigrant sentiment. Canada has published its own border police “wanted” list since 2011, and still does today, expanding it over the years to include several inadmissibility categories under the immigration law. Every so often, the government announces it has arrested another person on the list, each one numbered, as if the feds are keeping score.

Finally, there’s Trump’s focus on voter fraud. The president has insisted that millions of people illegally voted in the 2016 U.S. election, despite there being no evidence of mass, deliberate fraud. Trump’s spokesperson pointed to a study, though that study’s author said the White House misinterpreted his findings. Similarly, though less bombastically, Harper’s minister for democratic reform claimed in 2014 that new election legislation was necessary to cut down on voter fraud, despite electoral law experts saying it was not a widespread problem. That minister also pointed to a study, the author of which also said was being misinterpreted.

Again, none of this is meant to gloss over the Trudeau government’s missteps. Many Canadians have become frustrated with the government over a range of issues, from its handling of Indigenous affairs to its approval of large pipeline projects, its entitlement controversies, and now its abandonment of electoral reform. And to be fair, there are Trump-Trudeau parallels to be drawn, too. For example, Trump’s admiration of strongmen could be compared with Trudeau’s stated “admiration” for China’s “basic dictatorship”, or his government’s laudatory statement on the death of Fidel Castro.

Still, Canadians might want to reflect upon their recent past precisely so they can better hold their current prime minister to account, and continue to push for the values they want to see reflected in their country, their governments and their political parties.

Carl Meyer is a freelance journalist in Ottawa and a former reporter and managing editor for the Hill Times.