In Donald Trump they trust

He had a bad week, but Trump will bounce back. In this election, it seems American voters can’t help themselves. 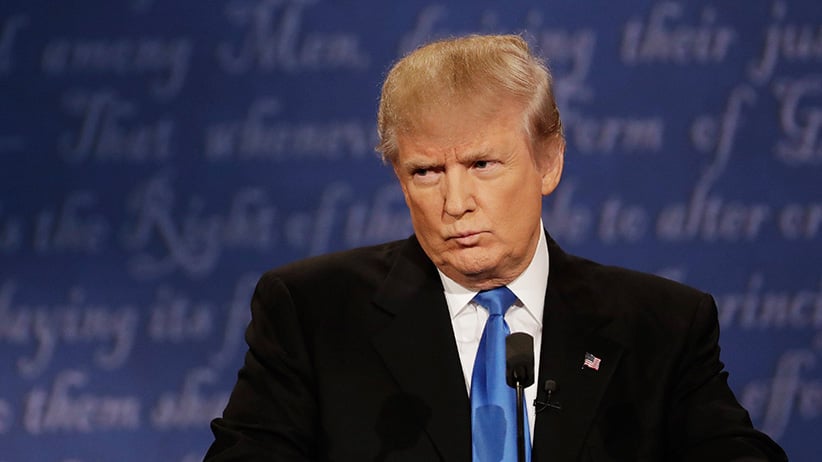 The week following the first presidential debate has been a bad one for Trump. But he’s bounced back before. (Patrick Semansky/AP/CP)

In the depths of the worst week of his train-wreck presidential campaign, Donald Trump unveiled a new catch phrase. Or rather, he recycled one. “Follow the money,” the Republican nominee commanded supporters gathered in a convention hall in suburban Milwaukee, “follow the money.”

Trump was referring to Hillary Clinton’s donors, accusing his Democratic opponent of taking cash from “special interests,” “Wall Street” and large corporations. “She and her financial backers will say anything, do anything, lie about anything to keep their grip on power—to keep their control over this country,” he thundered.

It wasn’t a slip of the tongue. Trump repeated his money exhortation eight times in a 45-minute address. Maybe the candidate and his speechwriters forgot that it was popularized in the 1976 movie All the President’s Men, about how reporters from the Washington Post—a paper Trump loathes — broke the Watergate scandal and torpedoed Republican Richard Nixon’s second term. Little matter, since by week’s end the tag line was reading more like the epitaph for his own Oval Office ambitions. As it turns out, following the money is even more instructive when it comes to Donald J. Trump.

There was the New York Times’ bombshell that the tangerine-hued billionaire declared a US$916-million loss on his 1995 income tax return — a minus that may well have entitled him to avoid paying any federal tax at all for the 18 years that followed. (Since Trump refuses to release his tax files, bucking the practice of all other presidential candidates over the past four decades, no one can say for certain.) Then news that the New York attorney general has ordered Trump’s eponymous foundation to stop soliciting donations, after months of digging by the Washington Post established Trump hasn’t given it any money since 2008, and has been using other people’s gifts to settle his own legal disputes. Then Newsweek revealed that Trump sent emissaries to Cuba in 1998 to sound out the Castro government on a hotel development, violating the U.S. trade embargo.

Related: What we know about Donald Trump’s taxes

There have long been doubts about the 70-year-old Republican nominee’s temperament and judgment, but now it is the essence of Trump’s brand — his wealth and supposed success as a businessman — that is being questioned. Trump says he “brilliantly used” the tax laws. His surrogates like New Jersey Gov. Chris Christie and Rudy Giuliani, the former mayor of New York, have gone even further, suggesting he’s some sort of accounting brainiac. Clinton can hardly hide her glee. “What kind of genius loses $1 billion in a single year?” she crowed this week.

The wobble in the polls that began with Trump’s erratic performance in his first head-to-head debate against Clinton on Sept. 26 is suddenly on the verge of becoming a galloping trend. The Democratic ticket has widened its lead in crucial battleground states like Florida, North Carolina and Pennsylvania, and is now winning almost all the national surveys. A new CBS poll has Clinton up by six points, and so does one from CNN. And a Politico/Morning Consult survey found that 55 per cent of respondents now hold a “less favourable” view of Trump after he spent several post-debate days lashing out at Alicia Machado, a former Miss Universe who accused him of insulting and sexist behaviour. (The feud reached its apex when Trump sent out a series of middle-of-the-night tweets calling Machado “disgusting” and suggesting voters “check out” her sex tape—which only he seems to know about.)

Staunchly conservative newspapers like the Arizona Republic and San Diego Union-Tribune have broken with decades of pro-Republican tradition and endorsed Clinton. Basketball superstar LeBron James — fresh off delivering an NBA title to Cleveland — published an op-ed urging his fellow Ohioans to vote for Hillary. Saturday Night Live garnered its best season-premiere ratings in eight years, with Alec Baldwin aping “the Donald’s” rasp and “tiny little butthole” mouth. And in the course of a single week, Trump’s chances of obtaining the 270 electoral college votes needed to become president plummeted from 45.2 per cent to 26.8 per cent, according to the election projection site FiveThirtyEight.

It feels like a tipping point has been reached — if you can ignore the fact that America has been here before. In July and August, following his underwhelming Republican convention, and a distasteful spat with the family of a slain Muslim-American soldier, Trump’s poll numbers were in free fall; senior Republicans openly talked about how to regroup for 2020. Yet all it took for him to close the gap and make the race for the White House a dead heat — Real Clear Politics’ polling average had the pair within a point in mid-September — was three weeks of almost-sane behaviour, and Clinton’s bad cold.

The pattern may well reassert itself. “There’s definitely going to be a narrowing of the race again,” says Adam Berinsky, a professor of political science at the Massachusetts Institute of Technology who studies American public opinion. “Given the nature of the political divide in the U.S., people pick their team and stick with it.”

Facing a pair of major party candidates they really don’t care for, Americans have been quick to express their disappointment — tuning out of the campaign when their standard bearer stumbles. But they have shown little willingness to switch sides. What the polls are capturing is more like crankiness than volatility. Berinsky believes Clinton will win in November, although by only two or three points. Trump’s messaging — with all its anger, not-so-veiled racism and talk of dark conspiracies and rigged elections — is off-putting to a majority. The ideas he champions however, are gaining traction. (This week’s Politico poll found 55 per cent support for putting U.S. soldiers on the ground in Syria to fight ISIS, and 58 per cent opposed to accepting any more refugees from the war-ravaged nation.) “He’s changed the nature of rhetoric,” Berinsky says, “and has potentially done damage to our trust in government.”

George Lakoff, a professor emeritus of linguistics at University of California at Berkeley, and an expert on political speech, argues that Trump has tilted the playing field of American politics even further toward conservative populism. He’s embraced the role of “strict father” — the archetype Lakoff uses to explain the longing for order and authority that binds Republicans together — and made its “only I can fix it” appeal even broader. “Trump’s been using your own brain against you. That’s what’s different,” says Lakoff. “He’s been a master salesman for 50 years.”

It’s not just what Trump says, it’s how he says it. Lakoff points to his use of hyperbole, frequent repetition and framing — labelling his opponents as “crooked” or “lying,” for example — as linguistic tricks that work on an unconscious level as well, activating brain circuitry and worming into thoughts, like a catchy advertising jingle. The proof of their efficacy is seen in how Americans are now openly debating concepts and policies, like border walls and racial profiling, that they would have been previously ashamed to discuss in private. “It’s not an ideology. It’s a moral view that says that an individual’s sole responsibility is to compete and win—period,” says Lakoff. “That’s where the Democrats have been failing. They think it all has to do with policy.”

Having already faced one near-death experience this campaign, Trump seems at least aware of how much trouble he’s in. While his stump speeches once bragged about the “tremendous” polls, he now entreaties to his supporters to be vigilant come election day. “You’ve got to go out, and you’ve got to get your friends, and you’ve got to get everybody you know, and you gotta watch the polling booths,” he instructed a crowd in rural Pennsylvania this week. “We can’t lose an election because of — you know what I’m talking about. So, go and vote and then go check out areas because a lot of bad things happen.” The “areas” in question, presumably being non-white and non-Republican.

If the Nov. 8 vote does turn out to be closer than the opinion polls predict, the doubts Trump is busy sowing could have long-lasting effects. Confidence in the integrity of American elections remains low even 16 years removed from the hanging chads of Bush v. Gore. (A recent AP poll found that half of Trump supporters have “little to no” faith in the process.) “If he loses, I fear that there’s going to be a lot of questions,” says R. Michael Alvarez, director of the CalTech/MIT Voting Technology Project, an ongoing study of U.S. election administration. In 2000, it’s estimated that between four and six million ballots went uncounted. Despite advances in technology, the numbers will probably be similar in 2016. In closely contested states there will inevitably be long lineups to vote, shortages of supplies, and losses of temper, Alvarez says. “The danger is that this will all heighten the polarization we already see.”

Trump is so unlike any candidate before — relentlessly insulting, untroubled by facts, devoid of policy — that it can often seem that all he stands for is himself. Following the big money is wise, given the circumstances. But people shouldn’t forget to pay attention to the change, too.