By Julie Pace and Lisa Lerer, The Associated Press October 9, 2016 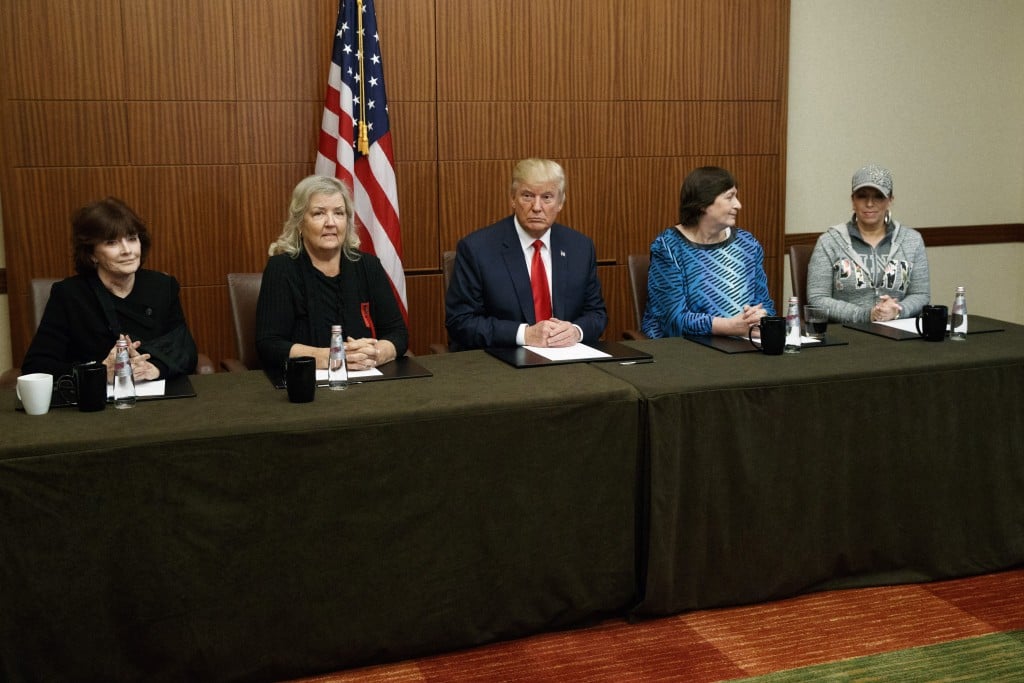 ST. LOUIS — Donald Trump, on the defensive since a video came out depicting him using vulgar language about women and seeming to condone sexual assault, held a pre-debate appearance Sunday with women who accused Bill Clinton of rape and unwanted sexual advances.

Trump has telegraphed for days that he was going to make the accusations against the former president a part of his White House campaign. It was a strategy he raised in his taped apology, posted hours after Friday’s leak of the video from 2005 that has rocked his campaign and caused dozens of Republican lawmakers to abandon their support of his candidacy.

Trump refused to take questions when he appeared with Paula Jones, Juanita Broaddrick and Kathleen Willey at the St. Louis hotel where he was preparing for the debate with Democrat Hillary Clinton. The meeting was posted on his Facebook page. The four women also were invited by Trump to watch the debate inside the debate hall.

“Mr. Trump may have said some bad words, but Bill Clinton raped me and Hillary Clinton threatened me,” Broaddrick said. “I don’t think there’s any comparison.”

Broaddrick, a former Arkansas nursing home administrator, first claimed 17 years ago that Bill Clinton raped her during a meeting in Little Rock in 1978. She sued Bill Clinton in 1999; the case was dismissed in 2001. A Twitter account that claimed to be that of Broaddrick revived the allegations on Saturday and was retweeted by Trump. Bill Clinton has long denied her account.

Jones, a former Arkansas state worker, alleged in 1991 that Bill Clinton propositioned and exposed himself to her. In 1994, she filed a sexual harassment lawsuit against him. Bill Clinton’s lawyers tried to have the suit dismissed. In November 1998, he paid Jones $850,000 to settle the case without apologizing or acknowledging culpability.

“I think they should all look at the fact that (Trump) is a good person,” Jones said. “He’s not what other people have been saying he’s been, like Hillary. He’s going to make America great again.”

Willey, a former White House volunteer, is using a website to again accuse Bill Clinton of forcing himself on her in 1993. He denied her charge and an independent prosecutor later concluded there was no evidence to doubt that denial.

Kathy Shelton, a fourth woman who appeared with Trump at the hotel conference room, was an Arkansas sexual assault victim whose assailant was defended by Hillary Clinton.

In 1975, at age 12, Shelton was sexually assaulted in northwest Arkansas. Clinton was asked by a judge overseeing the case to represent Shelton’s alleged attacker. After the prosecution lost key evidence, Clinton’s client entered a plea to a lesser charge. In an interview a decade later, Clinton expressed horror at the crime, but was recorded on tape laughing about procedural details of the case. The audio has been seized on by conservative groups looking to attack Clinton’s presidential candidacy.

On Friday, The Washington Post and NBC released a video of Trump, unaware he was on a hot microphone, suggesting that he forced himself on women to “grab them by the p—-” and that “when you’re a star, they let you do it. You can do anything.”

The comments have prompted a number of prominent Republicans to un-endorse the celebrity businessman.