'It's all fake news,' Donald Trump says at press conference 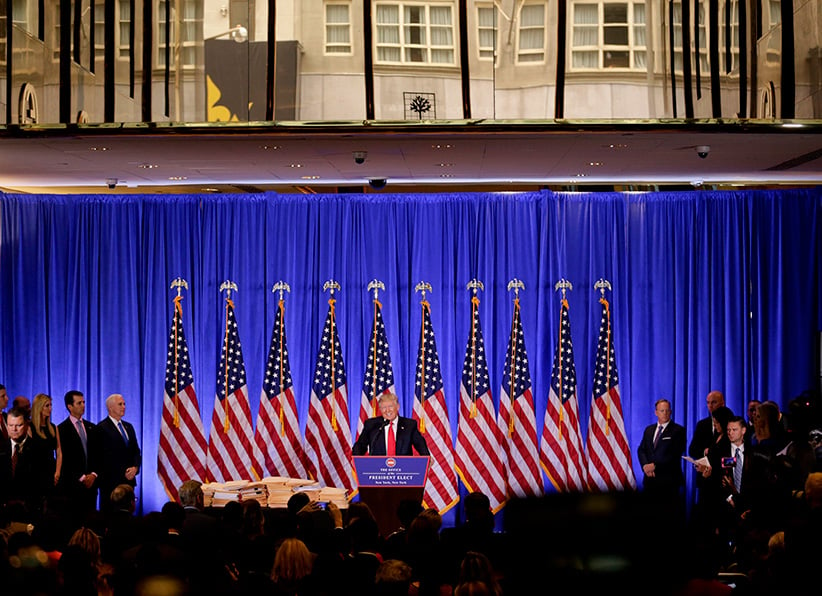 NEW YORK — A defiant President-elect Donald Trump on Wednesday adamantly denied reports that Russia had obtained compromising personal and financial information about him, calling it a “tremendous blot” on the record of the intelligence community if such material had been released.

The incoming president, in his first news conference since late July, firmly chided news organizations for publishing the material late Tuesday night. After weeks of scoffing at reports that Russians had interfered in the election, he conceded publicly for the first time that Russia was likely responsible for the hacking of the Democratic National Committee. “As far as hacking, I think it was Russia,” he said and quickly added that the United States is hacked by other countries as well, including China.

Trump’s extraordinary defence against the unsubstantiated intelligence report, just nine days before his inauguration, dominated a highly anticipated press conference in which he also announced a new Cabinet member, detailed his plans to disentangle himself from his sprawling global business empire, gave his outlook on the future of the “Obamacare” health care law and said he would soon nominate someone to fill the vacancy on the Supreme Court.

“I think it’s a disgrace that information would be let out. I saw the information, I read the information outside of that meeting,” he said, a reference to a classified briefing he received from intelligence leaders. “It’s all fake news, it’s phoney stuff, it didn’t happen,” Trump said in a news conference that saw him repeatedly joust with reporters. “It was gotten by opponents of ours.”

“If Putin likes Donald Trump, guess what, folks, that’s called an asset not a liability. I don’t know if I’m going to get along with Vladimir Putin — I hope I do — but there’s a good chance I won’t.”

Trump, Vice-President-elect Mike Pence and incoming White House press secretary Sean Spicer also denounced the report about Russia’s influence on Trump, and the incoming president said it never should have been released. He thanked some news organizations for showing restraint.

A U.S. official told The Associated Press on Tuesday night that intelligence officials had informed Trump last week about an unsubstantiated report that Russia had obtained compromising personal and financial information about him. The official spoke on the condition of anonymity because the official was not allowed to publicly discuss the matter.

Media outlets reported on the document late Tuesday and Trump denounced it on Twitter before his news conference as “fake news,” suggesting he was being persecuted for defeating other GOP presidential hopefuls and Democrat Hillary Clinton in the election.

The dossier contains unproven information about close co-ordination between Trump’s inner circle and Russians about hacking into Democratic accounts as well as unproven claims about unusual sexual activities by Trump among other suggestions attributed to anonymous sources. The Associated Press has not authenticated any of the claims.

Only days from his inauguration as the nation’s 45th president, Trump announced that he would nominate David Shulkin to lead the Department of Veterans Affairs, elevating him from his current role as VA undersecretary.

He promised that a replacement for the health care overhaul would be offered “essentially simultaneously” with the repeal of Obama’s signature health law — something that would be virtually impossible to quickly pass given the complexity of the policy changes. Republicans agree on repealing the law but nearly seven years after its passage have failed to reach agreement on its replacement.

Trump has repeatedly said that repealing and replacing “Obamacare” was a top priority, but has never fully explained how he plans to do it. House Speaker Paul Ryan has said that the House would seek to take both steps “concurrently.”

Turning to his plans to build a border wall along the southern border, Trump said he would immediately begin negotiations with Mexico on funding his promised wall after he takes office. He again vowed that “Mexico will pay for the wall but it will be reimbursed.” Trump recommitted to his plans to impose a border tax on manufacturers who shut plants and move production abroad. While the tax policy could retain jobs, it would also carry the risk of increasing prices for consumers.

Trump also said he would probably name his choice to fill the vacancy left by the death of Supreme Court justice Antonin Scalia in about two weeks after the inauguration.

Dillon said the Trump Organization would continue to pursue deals in the U.S., though Trump will relinquish control of the company to his sons and an executive, put his business assets in a trust and take other steps to isolate himself from his business. She said Trump “should not be expected to destroy the company he built.”

The move appears to contradict a previous pledge by the president-elect. In a tweet last month, Trump vowed to do “no new deals” while in office.

The lawyer said Trump would donate all profits from foreign government payments to his hotels to the U.S. treasury.

And pushing back against some ethics experts, Dillon said the so-called emoluments clause of the U.S. Constitution does not apply to foreign payments to Trump’s company. While some ethics officials have said that foreign leaders who pay for rooms and services at his various hotels would run afoul of the constitutional ban on foreign gifts or payments to the president, Dillon referred to it as a “fair-value exchange.”