Trump also wrote on Twitter that "many of the leaks coming out of the White House are fabricated lies."

By Jill Colvin and Ken Thomas, The Associated Press May 29, 2017 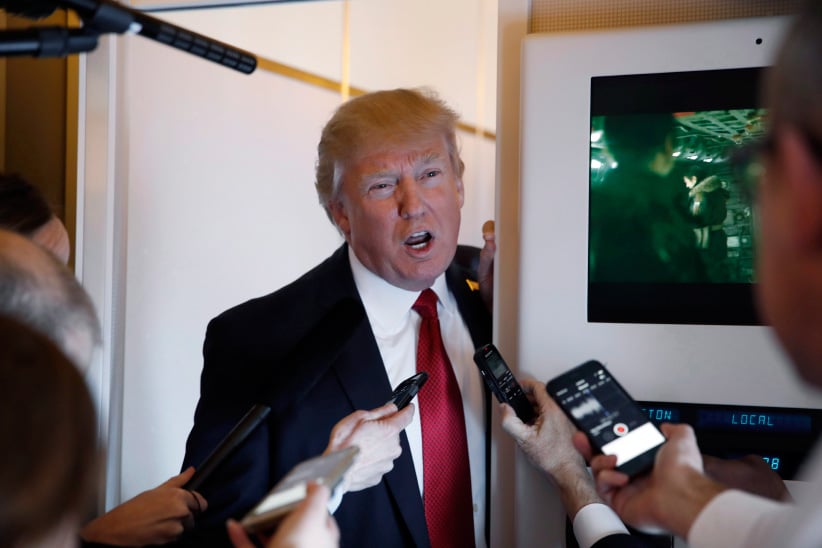 WASHINGTON – President Donald Trump is assailing internal leaks as he considers an overhaul of his White House staff and grapples with a burgeoning crisis involving alleged Russian meddling in the 2016 campaign.

Frustrated with what he views as his team’s inability to push back against the drumbeat of new revelations, Trump is seeking expanded teams of lawyers and experienced public relations hands. While he has called his first trip abroad a “home run,” it was shadowed by reports about Moscow’s interference and possible improper dealings with the Trump campaign and associates.

Trump struck back Sunday, after maintaining a limited social media presence throughout his nine-day trip. He unleashed a flurry of tweets, lashing out at what he called the “fake news” media. He focused heavily on leaks – both those coming out of the White House and an intelligence leak blamed on Americans about the deadly bombing at a concert in Britain.

On the bombing investigation Trump wrote: “British Prime Minister May was very angry that the info the U.K. gave to U.S. about Manchester was leaked.”

Trump also wrote that “many of the leaks coming out of the White House are fabricated lies.” He added that it is “very possible that those sources don’t exist but are made up by fake news writers.” 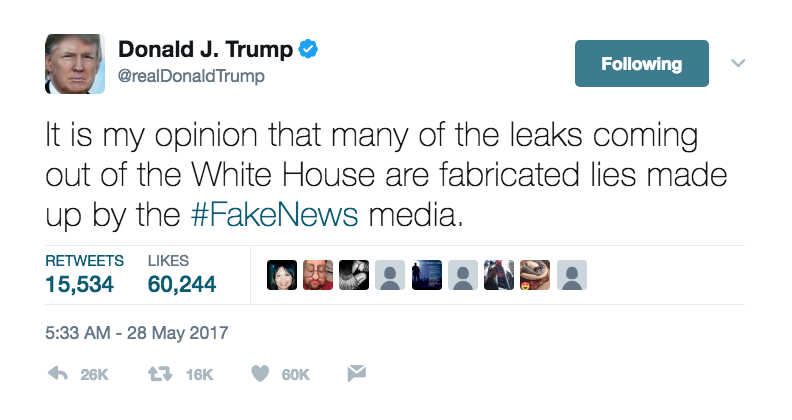 Even when authorized, top officials in the Trump White House frequently request anonymity to brief reporters “on background,” meaning their names will not be disclosed.

Trump, who made no public appearances Sunday, was expected to deliver remarks at Arlington National Cemetery on Memorial Day.

Trump’s longtime lawyer, Marc Kasowitz, has joined a still-forming legal team to help the president shoulder the intensifying Russia investigations. More attorneys with deep experience in Washington investigations are expected to be added, along with crisis communication experts.

During the Monica Lewinsky investigation, the Clinton White House brought on a dedicated group of lawyers and a created a separate media operation to handle investigation-related inquiries so they didn’t completely subsume the president’s agenda.

As he mulls changes, Trump has entertained formally bringing back his former campaign manager, Corey Lewandowski, and former deputy campaign manager, David Bossie. Both Lewandowski and Bossie discussed the prospect with the president before his trip, according to a person told of the conversations.

RELATED: Obama vs Trump: A tale of two presidents in Europe

Lewandowski’s return would be notable, given the fact that he was fired by Trump after clashing with staff and Trump’s adult children. Nonetheless, Lewandowski has the trust of the president – an advantage that many of Trump’s aides lack.

Major issues await Trump. He has signalled he will soon make a decision on whether to withdraw from the Paris climate agreement. And the search continues for an FBI director to replace the fired James Comey.

On the policy front, he must defend his budget plan, and the Republican health care bill that narrowly passed the House faces an uncertain future in the Senate. On that topic, Trump tweeted Sunday night: “I suggest that we add more dollars to Healthcare and make it the best anywhere. ObamaCare is dead – the Republicans will do much better!”

Trump also has to decide soon on a Pentagon recommendation to add more U.S. and NATO troops in Afghanistan, as well as boosting reinforcement for the beleaguered Afghan military.

While taxes have taken a back seat in recent weeks, Trump tweeted Sunday: “The massive TAX CUTS/REFORM that I have submitted is moving along in the process very well, actually ahead of schedule. Big benefits to all!”