Scott Gilmore: It can't be denied that Russia interfered in the U.S. election in support of Trump. But what did the president know about it? 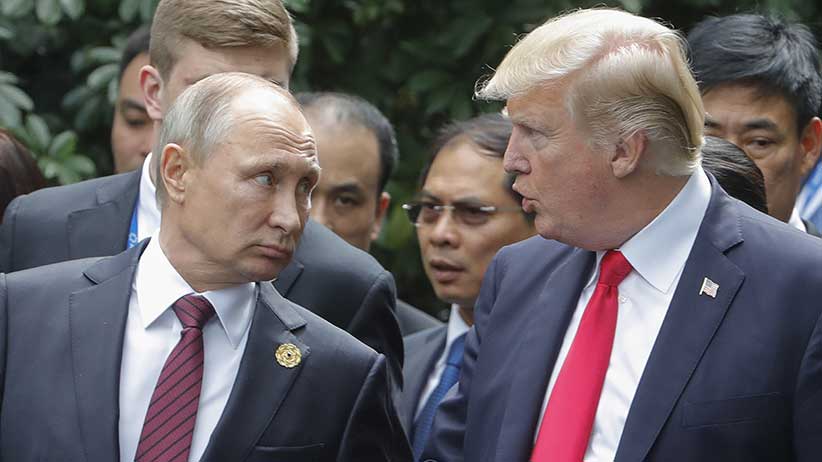 “Every time he sees me he says, ‘I didn’t do that,’ and I really believe when he tells me that he means it.”

On Air Force One on Nov. 11, U.S. President Donald Trump spoke to reporters about his recent meetings with Russian President Vladimir Putin. Trump was pressed on whether he had raised the issue of Russian meddling in the 2016 election. The revelations are now coming daily, and they draw an increasingly clear picture of widespread interference and direct collusion between the Trump campaign and Moscow.

The evidence, when considered in is entirety, is overwhelming. We know that Russian intelligence agencies were in contact with various members of the Trump campaign after he won the nomination. One of those staff members, George Papadopoulos, has confessed his Russian contacts offered the Trump team emails stolen from the Clinton campaign, and that the most senior people around Trump knew this and encouraged further contact.

The Clinton emails were then leaked by Moscow, and dominated media coverage for the remainder of the U.S. election. And recent congressional testimony from both Facebook and Twitter has confirmed that Russia also sowed political unrest and improved Trump’s odds by spreading disinformation to millions of American voters.

We know that Trump’s campaign manager, and other members of his senior team, had multiple financial links to Russian oligarchs close to the Kremlin. We also know that Trump made one single change to the Republican platform once he won the nomination: removing anti-Russian provisions regarding Ukraine.

The former National Security Agency director, both the former and current CIA directors, the former and current directors of the FBI and the Trump-appointed director of national intelligence have all publicly confirmed Russia actively undermined the presidential election. Even Russian officials, politicians and news anchors have openly boasted: “We elected Trump.”

In light of all this evidence, the White House correspondents travelling with the President naturally wanted to know if he raised the issue with Putin during the APEC summit. Trump said he had, and that he believes Putin when he says it is not true. The president even worried out loud that Putin might be insulted by the accusations. The Kremlin, meanwhile, denied the issue was raised at all.

At this point, there are three things that all objective observers cannot deny. First, Russia did interfere in the U.S. election. Second, the interference was in support of Trump. And third, senior members of Trump’s campaign were aware of it. That leaves us with what is likely to become the great historical question of the Trump presidency: what did he know, and when did he know it?

There are three possible answers to that question. The most implausible is that Trump has been working with the Russians for years and that he is their “Manchurian candidate,” knowingly doing the Kremlin’s bidding. If this were true, it would be the most incredible strategic coup in modern history. But there is absolutely no evidence to support this. And setting aside partisan fever dreams, Trump’s mercurial nature and inability to keep a secret or stay on script—even for a few minutes—makes this impossible.

A more likely scenario is that the Russians saw an opportunity to support a candidate who might be an ally, trailed their coats in front of the campaign several times and got a bite from Papadopoulos and maybe a couple others. Trump eventually found out, but didn’t care—or even welcomed the help. And now he is willing to say or do anything to protect himself and avoid impeachment.

The third possibility is that Trump was indeed kept out of the loop and genuinely does not believe the accusations and indictments now being levelled at his team. My money is on this scenario. I think Trump sincerely believes there was no collusion. And in spite of the growing pile of evidence in front of him, he is constitutionally incapable of admitting a foreign power helped win the election, because that conclusion would dramatically diminish the single greatest accomplishment of his life. And like he has with NAFTA, NATO, climate change, ISIS, the Central Park Five and dozens of other issues, Trump will risk looking like a fool unable to grasp the evidence before his eyes or presented by all the experts, if accepting the truth would cause him to lose face.

This is still a strategic coup for Moscow. Washington is embroiled in what will be years of partisan chaos. The American people are increasingly disenchanted with democracy. And in the Oval Office there is a man few take seriously at home or abroad. Trump is, in short, Putin’s Manchurian Idiot.