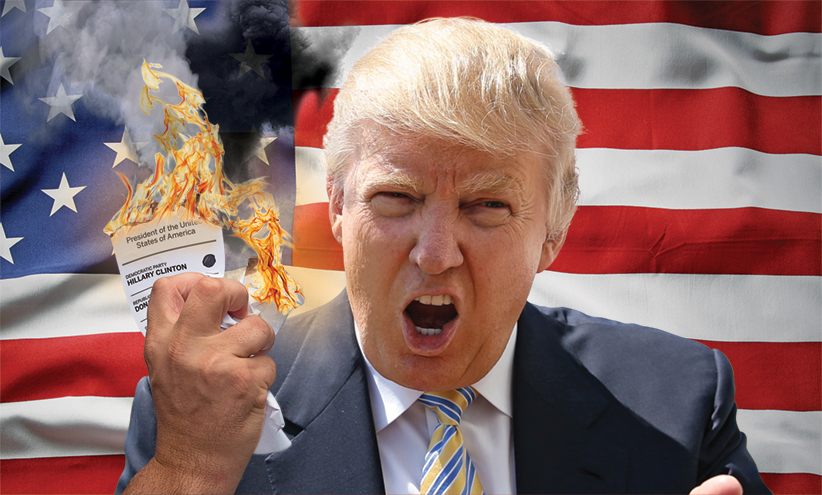 In a fractious campaign, there’s one thing all Americans can agree on: Donald Trump’s concession speech is going to be a doozy.

So I just phoned Crooked Hillary to congratulate her on stealing the election. “Good for you,” I said. “Nice going. You are the worst.”

Actually, I didn’t want to hear her stupid voice so I just texted her. Sent her the one that’s a picture of a poop. She got the message, right? She got it.

It was rigged, people. Many, many people are saying it, and they’re right to say it, because the thing was totally fixed. Rigged. Massive voter fraud. Illegal immigrants voting. Probably twice, three times. Non-citizens voting, too. Three little Mexican kids stacked inside a trench coat, the whole deal.

Did I run the best campaign? I ran the best campaign. The best. No one had ever seen a campaign like mine before. Huge crowds. Babies, signs, cheering, hats. And now I don’t get to be president just because Hillary got more votes? I don’t think so.

America is built on respect for the will of the people. Big league. But only to a point. Because Trump is not a loser, okay? I don’t lose. My middle name is Not Losing, Doesn’t Lose, Not Ever Going to Lose Thank You Very Much. My middle name is also Wins.

Did you see the ballots when you voted today? My name was the exact same size as Hillary’s! Ridiculous. I specifically requested all caps, 48-point text with a light dusting of gold flakes. Tasteful! But no, I get plain letters, same size as her name. All part of the conspiracy, folks.

And did you catch some of the results? So rigged! In one community, heavily African American, supposedly like three people voted for Trump. Which is impossible because I’m very popular with the blacks. Every time one of the blacks asked me a question, I talked to the blacks for seven minutes about the inner cities crumbling and how their lives are horrible and how they—the blacks—are probably going to get shot walking down the street tomorrow. And they didn’t vote for me? Give me one reason why!

The media—totally in on it. Disgusting. Folks, I don’t know what our country is coming to when commentators can just give their opinion of me based on my behaviour, demeanour, words, gestures, policies, beliefs and actions. Biased!

Then the ladies—sad! I was unfairly attacked for sexually inappropriate behaviour by multiple women—some of them no better than a seven, many of them fives or worse. And people believed them! Look: These things happened, if they happened, which they didn’t, but if they did, they happened in the past. I can’t control the past!

So the election was rigged and we’re not going to stand for it, okay? I want you to do something for Trump.

Second, I am calling on all loyal Americans to take up arms and occupy government buildings in your cities and towns. The post office. The other federal buildings that are there—I don’t know, do we run the Water Works like in Monopoly? Whatever. Get in there with your guns and say, “No mail until Trump is president.” Let’s see how long people can live without their L.L. Bean catalogues. Sorry, Rover, no dog bed for you this Christmas. Hillary’s fault.

Two months, tops, until I’m in the White House, okay? Maybe one. It’ll be easy to overthrow President Crooked. I’m the best at overthrowing things.

Now, some people say, “You can’t rig an election. Elections are run by the states or whatever. And most swing states are actually controlled by Republicans.” To which I say, “Nice point, very interesting, but I WANT TO BE THE PRESIDENT!”

And I should be—and I am—because the election was rigged. It had to have been. But because I am a gentleman and a peacemaker I am willing to call off the Trump coup if Congress immediately passes a constitutional amendment making presidential elections a best two out of three.

I’ve got no plans and an itchy Twitter finger, so let’s go again. Join me in my new campaign and together we can Again Make America Great Again.