Democrats can smell victory in the 2018 U.S. midterm elections. But don’t underestimate the Republicans. 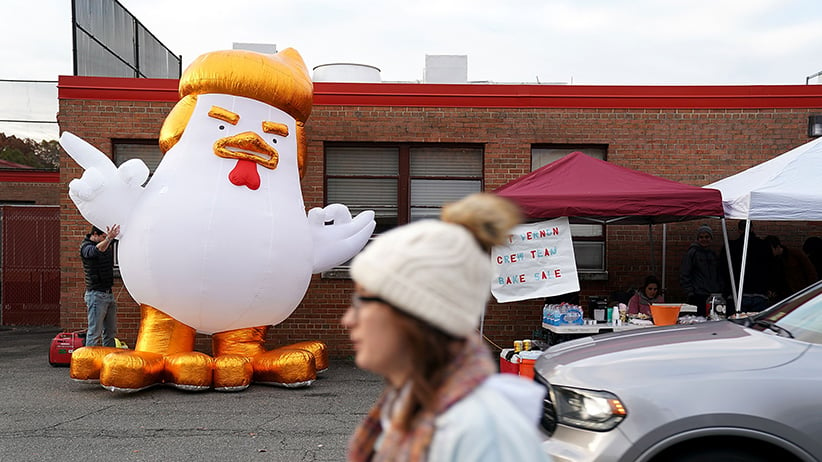 Supporters of Democrat Ralph Northam inflate a cartoon chicken made to resemble President Donald Trump outside the polling venue at Washington Mill Elementary School,Nov. 7, 2017, in Alexandria, Va. All eyes are on Virginia during this off-year election, where Republican Ed Gillespie is running against Northam, the commonwealth’s current lieutenant-governor. (Chip Somodevilla/Getty Images)

Eight and a half million people live in the city of New York—not counting Barron, Melania and Donald Trump, who recently moved to a smaller town—but only one of them is a Republican member of Congress. This is Daniel Michael Donovan Jr., the duly elected representative of the entire borough of Staten Island and parts of polyglot Brooklyn. He won his seat in a special election when his predecessor went to prison. Every other Gothamite in Congress is a Democrat.

“Recently,” Donovan was saying in mid-November in the U.S. Capitol, “I was reading an article that said that Democrats could smell a landslide in 2018. Well, that’s still a year away. I don’t know anybody who can smell that far.”

READ: The ghosts of past promises haunt the Republicans’ future

Donovan may be underestimating the nasal proficiency of the (currently) outcast party of the left. In November, in accordance with their country’s 18th-century constitution, American voters will be empowered to yet again remake one-third of the Senate and either preserve or flip all 435 seats in the House of Representatives. (The Republican Party currently controls both houses of Congress.) This year, some experts say, given widespread disaffection, if not clinical nausea, with the incumbent president, they just might do it and sweep away not only New York City’s last Republican, but hundreds of other incumbents as well.

Indeed the ricochet—or backlash—already may have begun. Few nationally significant contests were staged on an off-year Election Day in 2017, but when the Commonwealth of Virginia installed a new Democratic governor by a landslide and nearly flipped a state legislature heavily dominated by Republicans to a Democratic majority, the rest of the republic—and especially the Deep South—took notice.

“Throughout the South, there is now a good possibility that people who have not been part of the system will get involved out of frustration,” says Ted M. Ownby, director of the Center for the Study of Southern Culture at the University of Mississippi in Oxford. “These people may be motivated by disgust on a national level, but they are expressing that frustration locally. But can they move this visceral feeling to the state house, to the governor’s mansion, to the U.S. Senate—to me, that is the question.”

“There are places in the country where that narrative may work, but there are states like Mississippi or Georgia or others that are just not going to flip,” counters Albert Samuels, professor of history at Southern University in Baton Rouge, La. “But we saw what happened in the statewide and governor’s races in Virginia, and what happened there could happen in Florida, in North Carolina and other places that Trump won.”

“The thing that makes Republicans nervous, and should make them nervous, is how they got killed in the suburbs in Virginia,” adds Samuels. “And what also should worry them was the turnout. For a long time, the problem that Democrats have had with these midterm elections is that their voters don’t show up; the electorate is usually older and whiter. But there is a lot of energy out there on the left that has been inspired by Trump’s election.”

“What happened in Virginia is a big early-warning sign for Republicans,” says Jim Williams, a polling specialist with Public Policy Polling (PPP) in Raleigh, N.C. Surveys by PPP and other organizations through the second half of 2017 often showed a “generic Democrat” leading “a generic Republican” by a substantial margin in hypothetical congressional contests from coast to coast. But so many congressional districts have been ruthlessly cantilevered to ensure perpetual victory for one side or the other that the challenge for Democrats in 2018 is even more daunting.

“People see Democrats up by double digits on the generics and they say, ‘Oh, they’re a lock to take out the House,’ ” Williams says. “But because of partisan gerrymandering, that really doesn’t mean they will.”

Trump also maintains an energized core of support. “They like the way he acts. They like the way he doesn’t bow down to tradition. You can tell them, ‘You’re only 30 per cent of the population,’ but they say, ‘We won and Hillary didn’t, and that means we’re the majority.’ ”

While Republicans such as lonely Dan Donovan avow publicly that they will keep their seats by passing significant legislation on taxes, border security, health insurance and defence policy, members on the other side of the aisle—it is more like the Grand Canyon these days—sense fear and trepidation.

“I’ve heard from several Republican senators in so-called ‘safe seats’ that they are really, really worried,” Democratic Sen. Dick Durbin of Illinois told Maclean’s in November. “I think that even some conservative members from very red states are very concerned that they will lose a primary to someone who is truly extreme, and then that person will in turn lose to a Democrat.”

With Trump avatar and right-wing rainmaker Steve Bannon vowing to “primary”—it’s a verb now—Republican incumbents he deems to be insufficiently hardcore, replacing them with candidates even the party faithful may find beyond the pale, it could mark the beginning of the end of the long sojourn in the wilderness that president Lyndon B. Johnson predicted would be the fate of Dixie Democrats when he signed civil rights and voting rights legislation in the 1960s.

If Trump’s party can score some legislative wins it will “at least ensure that Republican donors will keep giving them money,” says Samuels at Southern U. “But the issue is going to be, will that matter? Looking at Trump voters, asking them their priorities, I don’t think they’d put tax cuts at the top of the list. That base was for Trump because Trump was Trump. Is any of it transferable to other Republicans? It’s going to be a really interesting test.”

“What I see in Mississippi is that some people are stepping up and having the courage to run. In our First District, our congressman, Trent Kelly, has been following Trump all the way down the line. And now, one of our professors of chemistry is challenging him—that’s what’s got to happen all across the South.”