Paul Wells: When the chips are down in truly strange circumstances, Ford's MPPs are backing him. 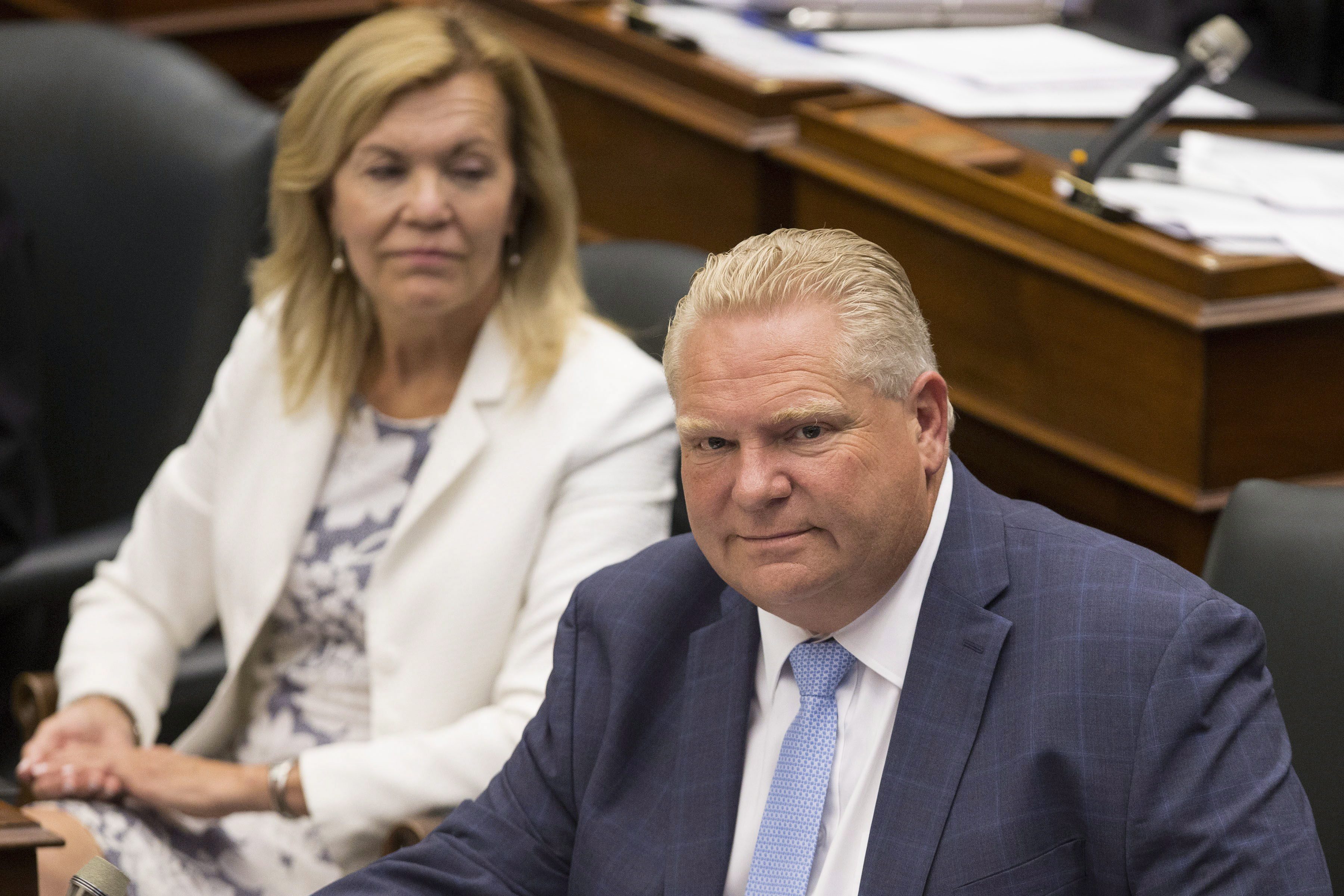 I was just noticing all the civilized touches in the Ontario legislature when it stopped being civilized.

There’s a countdown clock on each wall so members can see at a glance how much time remains in a given part of the day—in this instance, question period. Question period itself is the first item of business on most days. A decade ago I wrote a piece suggesting improvements to the federal question period in Ottawa. All unaware of Ontario’s legislature schedule, I proposed moving Ottawa’s question period to the morning: these confrontations will always be puffed-up and unproductive, but at least if they’re in the morning, you have the rest of the day to recover and get real work done.

Reporters in the press gallery can take photos of the proceedings, with a few trivial restrictions. Not in Ottawa. Members are freer to address one another directly instead of using the stilted “Mr. Speaker, the member opposite” construction. It’s all so civilized.

Then it went straight into the gutter. Who put it there remains a delightful mystery.

Without warning there was commotion on the legislature floor, and then the Speaker, Ted Arnott, left the chamber. There followed several minutes of milling about as members rose from their seats to confer in tight partisan knots.

After a few minutes question period resumed. Arnott said Doug Ford, the premier, had responded angrily to something he’d heard across the way. But Arnott hadn’t heard any offending remark. So he invited members to get back to the scripted questions and the stilted answers. Well, he didn’t phrase it that way, but anyway.

But at the next NDP question—basically, why does Doug Ford want to ruin everything in Toronto municipal elections—the Conservative government house leader, Todd Smith, rose to say that until the New Democrats apologized for something one of them had said, the government would answer none of their questions.

It took a few minutes to piece together what had happened, and even then we were stuck with two versions. The government’s version was this. Kaleed Rasheed, the Conservative member for Mississauga East-Cooksville, had been asking a friendly question to a government minister. Then the NDP house leader, Gilles Bisson (Timmins), had—again, this was the Conservative version, hotly denied by the NDP—begun imitating Rasheed’s lightly accented voice. That set Ford off. “You’re disgusting! You’re disgusting! Racist!” he shouted. And, incongruously, “Make sure the Toronto Star writes about that!” Andrea Horwath, the leader of the NDP opposition, started shouting back. The Speaker couldn’t get either of them to pipe down, so finally he just left until they were calmer.

For the rest of question period, every time a New Democrat asked a question, Smith said no government minister would answer it. Questions from the Liberal rump, and from a never-ending supply of peppy Conservatives looking for more evidence that Ontario has never been better governed, received prompt reply.

Eventually the countdown clocks on the walls reached 00:00:00 and members poured out into the second-floor corridor for scrums. Conservatives came out to swear they had heard Bisson mocking Rasheed. Bisson and Horwath came out to swear the opposite. Horwath said Ford is “lying through his teeth.” There is no physical evidence to suggest Bisson mocked Rasheed’s accent.

Audio of the incident shows Rasheed saying, “Thank you, minister, for your response and for letting taxpayers know the true cost of a referendum.” (The topic at hand was the only topic this week: Ford’s plan to cut the number of Toronto city councillors nearly in half, from 47 to 25, while a municipal election campaign is underway. Toronto Council has voted to request a referendum on the matter. Ford’s not biting.) Rasheed keeps going for a few seconds, and then there’s a lot of shouting.

Now what I find interesting is what Bisson told reporters later about what he’d said. “I was saying ‘Thank you for cancelling democracy,’ and I got cut off by other hecklers.” Bisson swears he didn’t mock Rasheed’s accent. In the absence of evidence, I’m happy to stipulate that.

But here’s the thing. Bisson’s “Thank you for cancelling democracy” doesn’t make a lot of sense, except as a mocking echo of Rasheed’s “Thank you, minister, for your response” line.

So maybe Bisson mimicked the general cadence of Rasheed’s speaking style. Maybe Bisson’s own light franco-Ontarian accent sounded to Ford like a too-close imitation. Maybe Ford just saw a chance to shove some heckling down the heckler’s throat. I bet many readers will be certain they know what happened. I’ll leave you to your certainty. I’m fresh out.

What’s striking is that Rasheed himself never heard a word from Bisson, and neither did Smith, the government house leader. But on Doug Ford’s word Smith led the government in administering punishment and lavishing praise on Rasheed. On both sides of the legislature, the whole thing was a weird, bitter team-building exercise.

Doug Ford had the support of almost none of these people when he ran for the party’s leadership. Thirteen incumbent MPPs supported Christine Elliott’s candidacy, five backed Caroline Mulroney, and two endorsed Ford. Most of his caucus and a good part of the government’s staff are still trying to figure him out. But so far, when the chips are down and in truly weird circumstances, they’re backing him. Make of that what you will.