Rob Ford’s election predicted a global political movement. What will his brother’s campaign tell us? 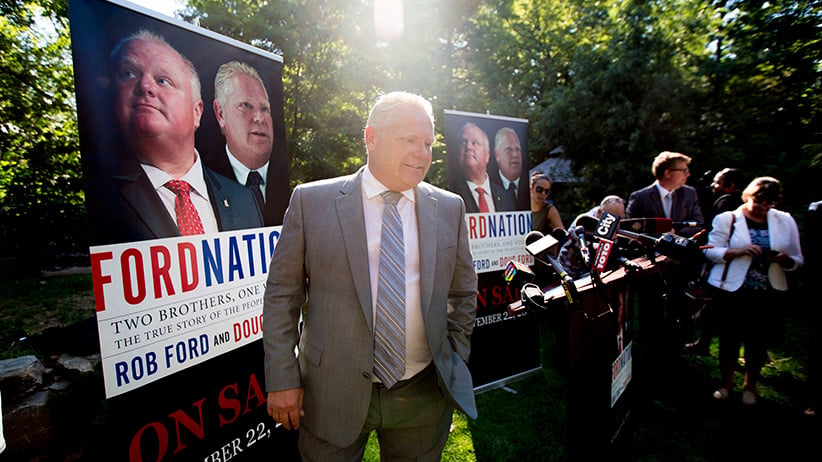 America has Donald Trump in charge. The United Kingdom has its Brexit. France very nearly had Marine Le Pen as president. What does Canada have to offer in the world of populism?

There was Kevin O’Leary and Kellie Leitch, two Conservative party leadership contenders. But one quit and the other lost, badly. Neither even got the chance to test their message in a national election.

READ: Farewell to Kevin O’Leary, a man who didn’t come back for you

As such, in the eyes of much of the world, Canada has largely avoided the same kind of populist politics that have taken root elsewhere. “Not only have the politics of white backlash failed, but immigration and racial diversity are sources of national pride,” the New York Times wrote about Canada in June. “And when anti-establishment outsiders have run the populist playbook, they have found defeat.”

It seems the Times forgot about Rob Ford, who ran the anti-establishment playbook perfectly to the mayor’s ofﬁce in Toronto in 2010. He promised to cut taxes, slash government funding and give the people what they wanted—subways. But his downfall was swift: allegations of harassment, intoxication at public events, footage of him smoking crack cocaine. Ford became a punchline for international late-night TV comics—until his death from a rare form of cancer in 2016. Populists in Canada haven’t had any big election wins since.

But next year, Doug Ford has promised to complete his brother Rob’s legacy. The elder Ford will run for mayor in 2018; the Toronto election campaign could prove to be a bellwether for populism in the country.

“The idea that we’re somehow immune from this or inoculated from populism in Canada is a myth,” says pollster Frank Graves, president of Ekos Research. “My view is populism is a force that’s on the rise.”

In a nationwide survey, Graves’s team found that only 33 per cent of Canadians found the rise of populism to be a bad thing. The majority thought it was either good (20 per cent) or neither good nor bad (42 per cent). And it appears to be Canada’s own unique version of populism, one that, unlike in the U.S., is not averse to free-trade deals or globalization. Instead, populism north of the border appeals to a growing distrust of the so-called elite and a desire for more restrictive immigration policies.

“If you look at Brexit, Le Pen and Trump, they were driven by two big forces: economic insecurity and cultural insecurity,” says Keith Banting, a political studies professor at Queen’s University. “The debate in Canada is: why is it not stronger?”

Banting says Canada’s version of populism is milder because the country wasn’t hit as hard by the global ﬁnancial crisis. As far as cultural insecurity goes, “Canadians don’t see immigration as an economic threat, and that’s where we really stand out in comparison with other countries,” he adds. “There’s still a cultural anxiety. If you ask Canadians if immigrants do enough to ﬁt in, our response in surveys suggest Canadians expect immigrants to adapt to our culture.”

Kellie Leitch and her so-called Canadian values test—while problematic in its xenophobic undertones—seemed to resonate with many Conservatives. “I just don’t think she was a convincing populist,” says Graves. After all, it’s tough to come across as one of the anti-elite when you become irate over business cards not having the honoriﬁc “doctor” before your name, as Leitch reportedly did.

Meanwhile, Kevin O’Leary—a mega-rich TV celebrity, much like Trump—led the polls in the Conservative leadership race, but he quit when his own polling (or perhaps his gut) said he wouldn’t perform well enough to win an election against Prime Minister Justin Trudeau. He never let himself go far enough to see how strongly his message would resonate.

All of which is to say that in Toronto, Doug Ford has a shot in the election campaign with his late brother’s platform of anti-elitism and criticizing wasteful government spending.

Graves’s polling team correctly predicted Rob Ford’s stunning win in 2010, but he’s not sure that Doug has the same kind of popularity. “I’ve polled Doug Ford when he’s had various forays into politics and he doesn’t have nearly the resonance that his brother did,” Graves says. “However, I do think he’d be a better vehicle to carry a populist message then some of the others.” That might not be enough when he’s running against the incumbent mayor, John Tory, a fellow right-wing politician.

If Ford wins, the world might soon realize Canada isn’t as immune to populism as they once thought. If Ford loses, populism won’t be dead. There just won’t be many of its messengers left with a chance to win ofﬁce.