All the Senate's a Hollywood soundstage 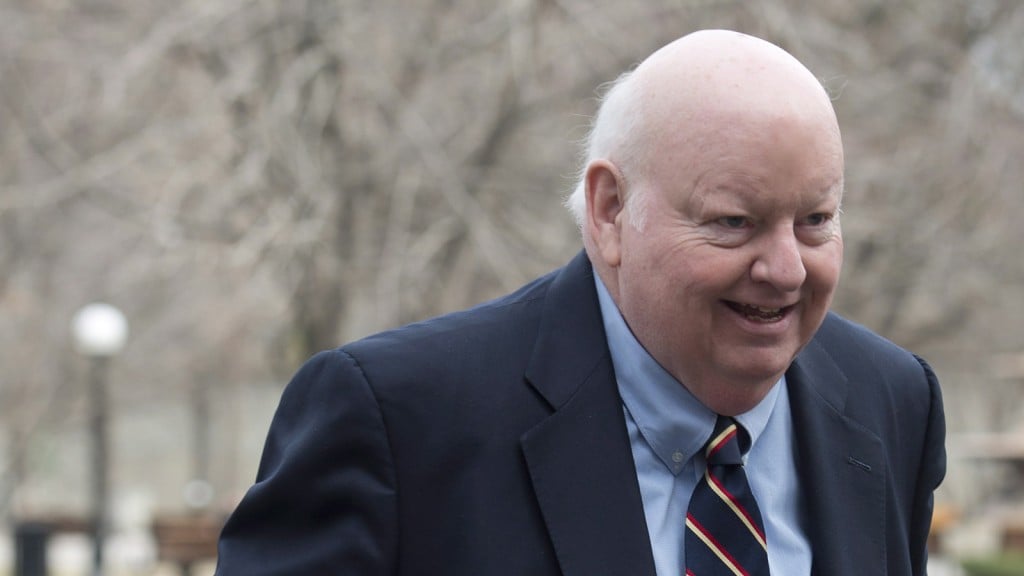 Observers of the proceedings under way in Courtroom 33 today learned that Sen. Mike Duffy, on trial for a good number of fraud, breach of trust and bribery charges, is Canada’s answer to Larry David, that the Senate is L.A., and that all of us in court every day are mere extras in an Ottawa edition of Curb Your Enthusiasm.

Fans of that HBO show know that David’s character (named after himself) is hapless, that he frequently butts heads with more capable adversaries, and that he just as frequently enlists the help of friends even more hapless and less capable than he.

That really is Duff all over.

The more capable adversary today was Elizabeth Brouse, a one-time marketing VP at St. John’s-based MQO Research, who evidently spent more of early 2012 than she’d have liked trying to collect a $1,000 subscription fee from Duffy. Brouse appeared in court as a disembodied voice over the phone from an undisclosed location, and told her story under cross-examination by Duffy’s lawyer, Donald Bayne.

She said Louis Legere, a managing partner of MQO’s parent company, introduced her to Sen. Percy Mockler, a Tory from New Brunswick. Brouse pitched Mockler on Atlantic Matters, a for-subscription report that runs $5,000 and contains polling bumf on eastern Canada.

According to Brouse, an articulate woman with a mellifluous, ready-for-radio voice, Mockler balked at the price—too tough to get through his senatorial budget, he said—but suggested they cut the cost five ways so he could share it among five colleagues. (Mockler is the Super Dave Osborne cameo in this yarn.)

Brouse said Mockler gave her a list of four of his colleagues who were coming on board.

No one, it appears, bothered to tell Duffy he was on it.

“What the heck is this?” he wrote Brouse after she sent the senator a welcome letter.

When she explained, he told her to send him the invoice. Which he didn’t pay.

Bayne led Brouse through a tangle of emails with invoices attached, each of them reminding Duffy of his outstanding balance, and each of which his office apparently ignored—to the point that Brouse, who checked the record and saw Duffy wasn’t reading the material anyway, suggested they just drop the whole thing.

But at some point, court heard, the flow of requests arriving in Duffy’s inbox eventually angered Duff. Brouse says he threw off an email complaining she was harassing him, trying to force him to pay for a service he didn’t want, and that MQO and Atlantic Matters should buzz off.

Brouse had referred to Duffy’s email, which was not available as evidence in these proceedings—and what all of us would have given to see it—several times during testimony, describing it as “angry in tone.” (Susie Greene?)

Her references to this email only served to thicken the atmosphere between Brouse and Bayne: when Bayne, wearing a checked sports coat on this Friday, expressed to his invisible interlocutor his surprise that she did not remember the other three senators on Mockler’s list, then repeated, in increasingly tortured phrases, the same question about who they might be, Brouse cut in: “You’re right, OK, I’m sorry. You know what? You can’t beat me into remembering their names.”

Now, on the topic of Duffy’s angry email—characterized by Bayne in his questioning as “irate”—Brouse fairly exploded. She testified she remembered returning home after receiving it, complaining to her husband of how “stirred up” she was by Duffy’s missive, that she felt “professionally affronted.”

Perhaps Duffy, the recipient of an invoice for a $1,000 subscription for a magazine he’d never asked for, realized he was in the wrong. Or perhaps it was a sharply worded email that Brouse said she sent the senator—after she’d received his testy note—that caused him to fold. Duffy ended up paying for Atlantic Matters.

Trouble is, he paid via one of Gerald Donohue’s companies. The allegation here is that Duffy used these as slush funds to distribute public money. And so Brouse got dragged into the matter, forced into circumstances by someone it seems clear she did not care for in the first place.

Bayne was Duffy’s proxy, and she warred with him. “That would be a reasonable conclusion,” Brouse told him at one point, when she apparently felt the query begged the question. She delivered the line with the exactitude and directness of a woman out of patience.

That wasn’t the end of the proceedings: after the court hung up on Brouse, Mark Bourrie arrived. (Richard Lewis!)

Like Lewis, Bourrie is a rumpled figure. He’s the kind of guy you go to when, like Duffy, you are being bullied by online trolls and want an expert to deal with them (Bourrie is an author, journalist and university professor, said to be expert in the realm of the Internet). Bourrie also received money from Duffy, $500, given him in the form of a cheque signed by Donohue. It was for his work battling the trolls in cyberspace. His wife, a law student at the time, had nothing to do with earning it. And it was value for money.

“Has anyone dropped the F bomb in here yet?” Bourrie asked the court.

After Bourrie did, he looked out into the gallery with the face of a cat that just ate the bird—and found it delicious.