Despite Justin Trudeau’s best efforts, the vision of Canada championed by Stephen Harper is alive and well 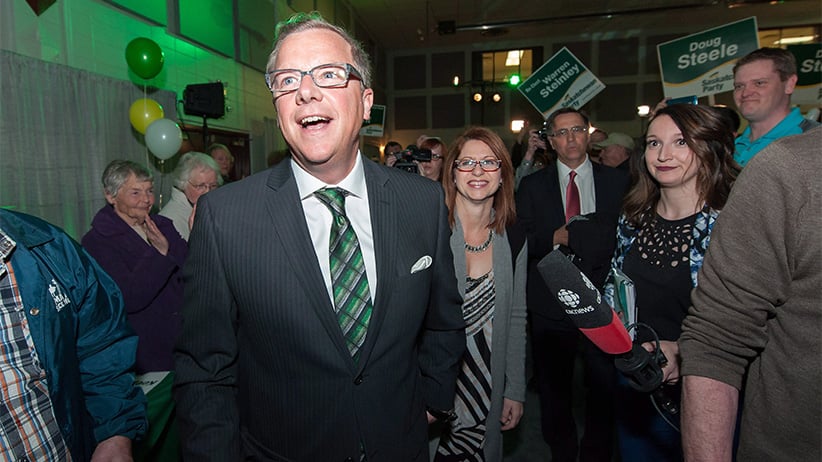 With 63 per cent of the popular vote in Saskatchewan’s provincial election this week, Brad Wall had little trouble defending his title as Canada’s longest-serving and most popular premier.

Wall, who heads the conservative-minded Saskatchewan Party, won his third consecutive majority with a platform built by small shovels. His centrepiece commitment was to deliver a balanced budget next year by keeping a lid on government spending. What electoral treats he offered were limited to road-building plans and tax credits for seniors, home buyers and volunteer firefighters. His platform document was perhaps more noteworthy for what it didn’t say—no mention of climate change, carbon pricing or co-operation with Ottawa. Saskatchewan voters approve of the cranky reputation Wall has earned in the rest of the country as critic of a federally imposed carbon price and staunch defender of the oil and gas sector, the need for more pipelines and the concept of provincial rights.

One of the most notable features of the federal Liberals’ first few months in power is how quickly and thoroughly they have been able to eliminate almost all traces of Stephen Harper’s nine years in office.

From the moment Prime Minister Justin Trudeau took office, he’s been hard at work unwinding his predecessor’s legacy. Everything from the biggest and most substantive policies of the former government to the tiniest bits of political symbolism are being deleted. The long-form census is back. Dual citizens convicted of terrorism can no longer lose their citizenship. Our CF-18s have stopped bombing Islamic State. The planned hike in retirement age from 65 to 67 for Old Age Security and Guaranteed Income Supplement has been stopped. Climate change and carbon pricing are now major items on the federal agenda. Conservative-backed public monuments in Ottawa and Cape Breton have been cancelled or moved. A federal inquiry into missing and murdered Indigenous women is now going forward. The Court Challenges Program and Katimavik have been revived. CBC funding is also back in a big way. No vestige of the former regime is too small to be undone. Citizenship Minister John McCallum has even said he’s planning to rewrite the Conservatives’ citizenship guide because the current version is “a little heavy on the War of 1812.”

As if more examples are necessary, the March budget offers the clearest and most significant evidence of the obliteration of Harperism. With deficits of $29 billion scheduled for this year and next, and no real plan or concern about when the red ink will stop, Trudeau has thoroughly repudiated Harper’s core belief that balanced budgets ought to be a government’s default position and deficits contemplated only when circumstances make them unavoidable. The Conservatives’ symbolically important Balanced Budget Act is also on the way out. “Balanced budget legislation enacted under the previous government is inconsistent with the government’s plan to return to balanced budgets responsibly, and in a manner that supports economic growth,” the budget states. Unrestrained spending now appears to be the order of the day in Ottawa. As university economist and former federal deputy minister of finance Paul Boothe explained on Macleans.ca as part of our post-budget coverage, the federal government is “adrift without a fiscal anchor.”

That such a dramatic turnaround has been accomplished in so little time suggests Harper may have been less successful in putting his stamp on the country than he hoped. Certainly the excising of his deliberately divisive and confrontational approach to such things as religious accommodation, criminal justice and government transparency should be seen as a welcome change for Ottawa. However, the rapid retreat from fiscal discipline raises serious concerns for all taxpayers regarding how we will pay for this current spending orgy. It could be that what was once seen as the most durable of Harper’s accomplishments—the two-percentage-point cut in the GST—will inevitably be undone. The new approach also raises the prospect voters were sold a bill of goods on Oct. 19. The Liberal platform promised only to run “modest short-term deficits of less than $10 billion in each of the next two fiscal years” and lower taxes for all but the richest Canadians. Back-to-back $29-billion deficits and the future taxes necessary to pay for them were never part of the Liberals’ bargain with voters.

With a preference for low taxes, limited government, balanced budgets and a sharp distinction between federal and provincial jurisdictions, Harperism still has much to recommend it. Judging by this week’s results in Saskatchewan, many voters still approve of that portion of Harper’s legacy. Trudeau shouldn’t be so quick to hit the delete button on all of his predecessor’s policies.