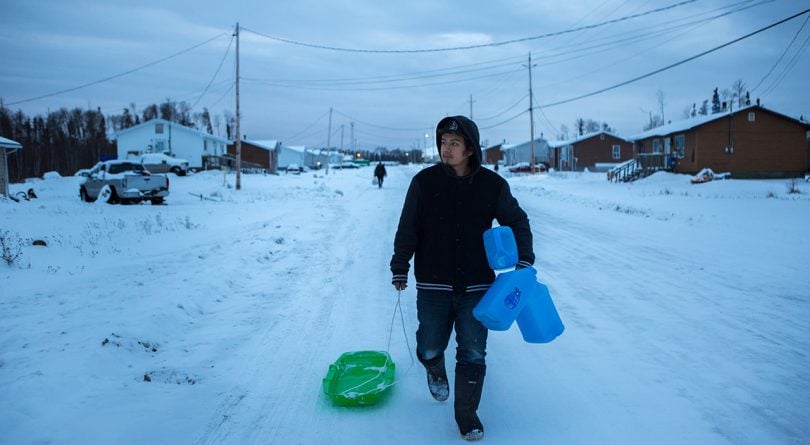 Several times a week, Ashley Sakanee would haul bottles down to the local hotel’s reverse-osmosis machine, just so his family could drink and bathe. (Photograph by Chris Donovan)

Days after he was sworn in as Prime Minister in late 2015, Justin Trudeau wrote mandate letters to his Cabinet members, and one sentence that appeared in many of the missives stood out: “No relationship is more important to me and to Canada than the one with Indigenous Peoples.”

Four years on—amid protest on issues ranging from pipelines to care for those suffering the effects of mercury-poisoned water—that relationship remains strained, and other parties are pushing different ideas to keep Canada on the path toward reconciliation.

When the National Inquiry into Missing and Murdered Indigenous Women and Girls released its final report earlier this year, it concluded that those deaths and disappearances were part of a genocide Canada has committed against Indigenous peoples. But it also included several hundred calls for justice, much as the Truth and Reconciliation Report of 2015 had. Many of the latter’s 94 calls remain unfulfilled.

All the while, Indigenous voter turnout is on the rise, and more Indigenous MPs have been elected to Parliament. Perry Bellegarde, the Grand Chief of the Assembly of First Nations, recently outlined the organization’s priorities for the election, crediting the current government with taking Indigenous issues more seriously than its predecessors. But he stopped short of endorsing any party or leader.

So where does each party stand?

Trudeau said he wanted the reconstruction of Canada’s relationship with Indigenous peoples to be part of his legacy. He followed through on his promise to launch an inquiry into Missing and Murdered Indigenous Women and Girls. The Liberals have also invested in infrastructure and training to help lift 87 longstanding drinking water advisories on First Nations reserves; the feds and First Nations are on track to have the remaining 56 advisories lifted by the 2021 target date.

But more recently, polls suggest the Liberals are losing the support of many Indigenous voters. Indigenous groups continue to protest Trudeau for his support for the Trans Mountain Pipeline; the chief of the Grassy Narrows First Nation announced his candidacy for the NDP, saying Trudeau “let Indigenous people down” over the delayed construction of a mercury poisoning treatment centre in the region; and the PM also faced criticism for booting Jody Wilson-Raybould—a member of the We Wai Kai Nation—from her high-profile cabinet role as attorney general, and then the Liberal Party altogether, amid the SNC-Lavalin scandal.

What they’ll do: While the Liberals have announced their full support of the United Nations Declaration on the Rights of Indigenous Peoples (UNDRIP), they will reportedly pledge to apply it to Canadian law as part of their upcoming election platform.

During a Q&A last year, hundreds of chiefs from the Assembly of First Nations chiefs got to ask Andrew Scheer how he would be different from his predecessor, former Prime Minister Stephen Harper, whose government apologized for the residential school system, yet twice voted against adopting the UN’s declaration on Indigenous rights. Scheer told his audience it would have to wait and see when his platform is released. And then they booed him.

More recently, in the aftermath of the MMIWG inquiry which chronicled violence against generations First Nations, Métis and Inuit women and girls, the Conservative leader said that while each live lost is a tragedy, he did not agree that “genocide” is the proper term.

What they’ll do: Still waiting on that platform.

Jagmeet Singh fought to have Bill C-262 passed into law, which would require Canada to align its laws with the UN declaration, but was left expressing frustration at what he said was stalling within the Senate, effectively killing the bill. Singh is now pledging to create a national council for reconciliation to provide oversight as the NDP implements UNDRIP and the Truth and Reconciliation report’s calls to action.

What they’ll do: Per the TRC report, Singh promises to create a “National Day for Truth and Reconciliation.” His platform also promises to fund on-reserve emergency management, such as firefighting training and equipment; to resume and expand public transportation in rural and remote regions; and to create a northern infrastructure fund to invest in roads and broadband Internet for remote communities.

This summer, the AFN invited all the major political parties to send representatives to speak at the AFN’s annual general assembly. Elizabeth May, the Greens like to point out, was the only federal leader to show up. (MPs from the other respective parties did attend.)

May has also floated the idea that, if SNC-Lavalin is found guilty of fraud and corruption, the engineering company be sentenced to a form of community service where it must fix drinking-water problems on First Nations reserves.

What they’ll do:  The Greens promise to consult with Indigenous peoples to figure how and when to repeal the much-reviled Indian Act, which the Trudeau government sought, yet failed, to scrap. The Greens have also said they will implement the calls to action from the TRC, as well as those from the MMIWG report. The party also says it will remove the two per cent cap on annual increases to funding for Indigenous post-secondary education.