The prospect of a vote sure lit a fire under the Trudeau government's behind. Maybe we should have one every three months. 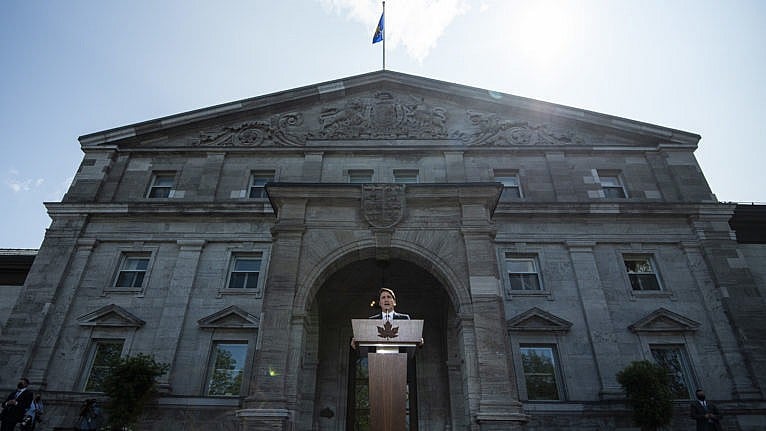 “This pandemic is not over,” Justin Trudeau, who said in May that “nobody wants an election before the end of this pandemic,” told reporters on Sunday outside Rideau Hall.  So today he was calling an election. It only hurts if you try to make it make sense.

The Liberal leader hopes the electoral system he promised to end in 2015 will work its distorting magic and give him a majority in the House of Commons with a plurality of votes. A vaccine mandate that wasn’t federal government policy before Friday and won’t be implemented before Halloween had already, he said, become the measure of any party’s seriousness. Meanwhile his government stands ready to protect Afghans whose plight it ignored in 2017; they need only apply to a Canadian embassy that had closed a few hours earlier until further notice.

No wonder the Trudeau Liberals want to keep moving “Forward—For Everyone.” First, because that sentiment just finished working a charm for the BC NDP, in those words. And second, because where Trudeau stood on Sunday can’t have felt very comfortable.

Oh well. Governor-General Mary Simon had, by all the evidence, given Trudeau the only correct answer during a private conversation inside Rideau Hall that lasted 40 minutes and felt longer: in almost any imaginable circumstance and certainly in this one, a prime minister who wants Parliament dissolved can’t be kept there against his will. The next decision is up to voters.

They may well decide to give the Liberals more support than in 2019. Governing parties in British Columbia, New Brunswick and Newfoundland and Labrador profited from pandemic elections. Erin O’Toole, the Conservative leader, made a decent first outing, though his decision to cling to voluntary vaccination for public employees—and again, I can’t help repeating this is the position Trudeau held until last week—looks like a substantial vulnerability. This debate is a moving target, after all; just ask Ontario NDP leader Andrea Horwath, who had to backtrack after stating as NDP policy what was, when she said it, the actual policy of just about every government in Canada.

There will be plenty of time to kick the tires on all these parties before Sept. 20. For the moment, I’m struck by the amazing burst of industry the second Trudeau government displayed in what turned out to be its dying days. Maybe the problem with the law on fixed elections isn’t that successive governments from two big parties have ignored it when it suited them. Maybe the problem is that it too rarely interferes with their daily routine. Because the prospect of a vote sure did light a fire under the incumbent’s behind.

On Saturday, normally a quiet day in government circles, the Department of National Defence launched on online progress tracker “to update… Canadians about our work and our progress in addressing culture and conduct” regarding sexual misconduct in the Forces. To be fair, perhaps only on Saturday, six years and change after the Deschamps report, did progress against sexual misconduct become significant enough to be measured. Also on Saturday, the global affairs minister announced the appointment of a new high commissioner to South Africa—fully two years after the previous high commissioner decamped from Pretoria.

A global refugee crisis having finally had the good sense to coincide with a Canadian federal election campaign for the first time since 2015, the Trudeau Liberals promised on Friday afternoon to take in 20,000 Afghans. On the preceding Friday the Prime Minister named a new deputy clerk of the Privy Council and new deputy ministers of justice and intergovernmental affairs, as well as a new federal lead for proof of vaccine credentials.

On the same day, Aug. 6, Michael Sabia, the storied super-mandarin deputy minister of finance, sent a memo to finance officials detailing the appointment of 11 assistant deputy ministers in fields like economic policy, tax policy, federal-provincial relations and financial sector policy. These changes have been a source of great fascination within government, but none of them has been announced to the public. They follow several high-profile departures from finance. They were made, as Sabia and his right hand Nick Leswick put it in the memo to colleagues, to “strengthen our ability to act as a source of new policy thinking around some of the very big issues facing the country.” Things like “Canada’s transition to a lower carbon economy; the development of new engines of economic growth; and the future of major programs like employment insurance and the future of our health care system.”

Finally, in a development I’ll discuss in more detail here in the next few days, Harjit Sajjan reached a remarkable agreement with his U.S. counterpart, Defense Secretary Lloyd J. Austin, on modernization of NORAD, the 62-year-old continental defence system. The Trudeau Liberals have been extraordinarily tight-lipped about this project, which would certainly cost billions of dollars and will inevitably force the question of Canadian participation in ballistic-missile defence. That the government finally makes its first substantive statement about its plans late on a Saturday night and on the eve of an election call, makes a mockery of the kind of debate it could have had in Parliament. If we still had a Parliament.

But I’ve got a hunch that if there were no election coming, much of the change I’ve just described wouldn’t have happened. Who can be against new policy thinking around very big issues? I’d even be grateful for some sturdy old policy thinking. Really any thinking at all. And if it took an unannounced internal revolution at finance and a midnight document dump from national defence, well, you can’t make an omelet without breaking eggs.

I’m for more more more egg breaking, which is why I here call for the fixed-election date law to be amended so that henceforth, a federal election will be required by law every three months.

Think of the benefit. If the prospect of a hanging concentrates the mind, let’s have more hangings. If the looming September election forced this government to name a vaccine-credential lead and post an online culture-and-conduct progress tracker, a mandatory December election might at last be what it takes to make Justin Trudeau come up with a China policy. The March campaign could kick off with somebody explaining why there is an infrastructure bank. Next June’s campaign could, at long last, feature the symbolic planting of a tree. One of these fiscal quarters, in a fit of giddy electoral ambition, somebody might even let David Lametti make a decision.

It won’t be easy for the Conservatives, coming up with a new sacrificial leader every 90 days. The debate commission will have to fight against bloat, lest the third English-language debate of, say, 2023 feature more moderators than there are eligible voters on Prince Edward Island. We’ll have to iron out the bugs in my project as we go along. But the boost in government productivity will be worth the hassle.

“In this pivotal, consequential moment, who wouldn’t want a say?” Justin Trudeau said on Sunday. I thought we had a say in 2019 when we elected a minority government facing a variety of opposition parties. I thought we always have a say. But let’s not be too doctrinaire in rejecting his logic. If we only have “a say” when their jobs are on the line, then let’s ensure their jobs are constantly on the line. “Who thinks Canadians shouldn’t have a say?” Trudeau said. Who indeed?